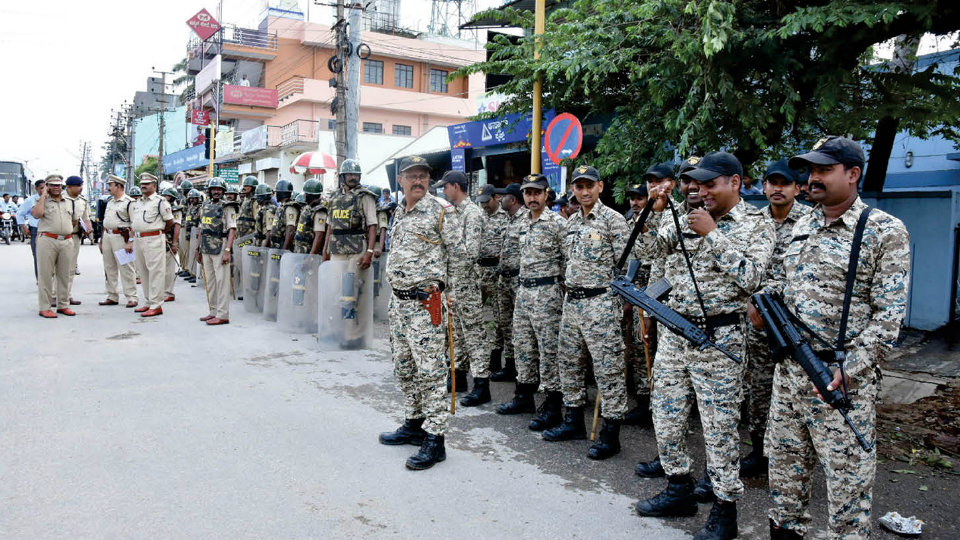 Mysuru: Hours before the Five-Judge Constitutional Bench of the Supreme Court headed by Chief Justice of India Ranjan Gogoi delivered the verdict in the historic Ram Janmabhoomi-Babri Masjid dispute this morning, the Mysuru City Police had beefed up security at all sensitive and hyper-sensitive areas across the city as a precautionary measure.

Police were also in constant touch with the local MLAs, Corporators and leaders throughout the day. Security was also beefed up at N.R. Mohalla, Bharatnagar, Mandi Mohalla and Lashkar Mohalla which are considered to be sensitive areas. Security personnel were also deployed at various places of worship. The City Police had deployed extra personnel from Krishnaraja Sub-Division and Devaraja Sub-Division to Narasimharaja Sub Division.

The Police were also seen monitoring movement of citizens through CCTV cameras installed at various junctions at the Centralised Command Centre at City Police Commissioner’s Office. In fact, City Police Commissioner K.T. Balakrishna was personally seen monitoring the movements and giving instructions to his officers. The Mobile Command Centre was also stationed at K.R. Circle early this morning before it moved towards other areas.

Speaking to reporters, Balakrishna said that the city was peaceful and added that the deployment of Police personnel would continue till 6 am on Monday (Nov. 11). He also added that prohibitory orders under Section 144 had been imposed and no permission would be granted to take out processions.

“We have set-up 12 checkpoints at various parts to monitor vehicles entering the city. Police will be deployed round-the-clock at various locations. Apart from regular Police personnel, 7 platoons of KSRP and 250 home guards have been stationed,”  he said.

The Mysuru District Administration had declared a holiday to schools and colleges across the district. Apart from imposing Section 144, processions and bursting of crackers was banned. Restriction on sale of liquor has also been imposed till tomorrow.  The administration has warned strict action against those persons spreading provocative messages on social media.

It was not the usual weekend in Mysuru which is normally flooded with tourists. A few tourists, especially college students, who had come on educational tours, preferred to stay indoors in their respective hotels. Fewer crowds were witnessed at Mysuru Zoo, Mysore Palace, Chamundi Hill and other tourist locations.