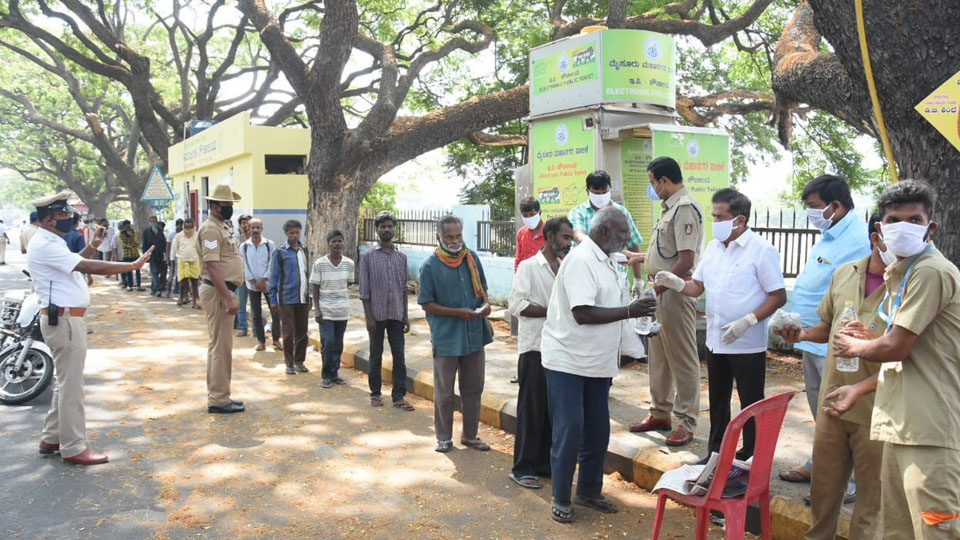 Mysore/Mysuru: Even as the city celebrated a low-key Ugadi in the wake of Coronavirus on Wednesday with people confined to their homes following the national lockdown announced by the Union Government, the City Police and former MLA M.K. Somashekar in a humane gesture, distributed food packets and face-masks to destitutes, stranded persons and the shelterless at several places in city yesterday.

A Police team headed by DCP Dr. A.N. Prakash Gowda and N.R. ACP Shivashankar distributed food packets to a number of destitutes at City Railway Station and other places in the vicinity, with hotels and restaurants remaining shut due to the lockdown.

Somashekar, along with members of Janaspandana Trust, distributed food packets, water bottles and face-masks to over 500 people who were left stranded at City Bus Stand,Suburban Bus Stand, Agrahara Circle and Cheluvamba Hospital due to non-availability of public transport to return to their native places. Somashekar had taken permission from the district administration for free distribution of food  packets.