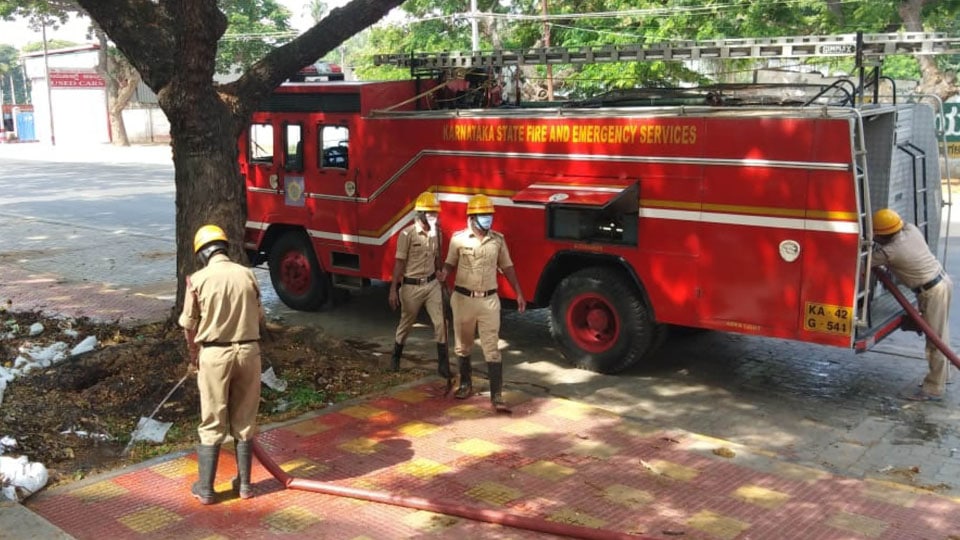 Mysore/Mysuru: Even as the Government is battling to stop the spread of COVID-19, the Mysuru City Corporation (MCC) has launched spraying of disinfectants (Fumigation) in all 65 wards.

Speaking to SOM, MCC Commissioner Gurudatta Hegde said that spraying of disinfectants (Sodium Hypo Chloride) has begun from Wednesday. Pointing out that four vehicles have been drawn from the Fire and Emergency Services Department for fumigation, he said that the drive will be jointly carried out by the Fire Department and MCC staff, using fogging machines.

Stating that the working hours of Pourakarmikas which was from 6.30 am to 2 pm, has now been rescheduled  to 6 am to 10.30 am, he said likewise, the working hours of underground drainage workers has been rescheduled to 8 am to 1 pm, from the usual 8 am to 4 pm. Maintaining that he has directed the officials to take all precautionary measures for ensuring the health of the civic workers, he said that all civic workers must compulsorily  wear safety gloves, face masks and gumboots while on work. He has directed officials to distribute safety gears, hand sanitisers and liquid hand wash.

Asking all the civic workers to seek medical attention immediately in case they show symptoms such as cough, fever, sneezing and throat pain, he advised them to be fully equipped with protective gears and also maintain social distancing while collecting wastes from homes and other places.

Spraying of disinfectants-  Abhaya team at work: In order to contain the spread of the deadly Coronavirus, the MCC’s Abhaya team has sprung into action, by carrying out spraying of disinfectant in all wards. The MCC staff, under the guidance of Health Officers Dr. Nagaraj and Dr. Jayanth, Development Officers Satyamurthy, Sunil and Nagaraj, sprayed the disinfectant  at various places including Vijaya Bank Circle in Kuvempunagar, New Kantharaj Urs, Saraswathipuram, T.K. Layout, Kukkarahalli Lake and surrounding areas, Akashavani Circle, Yadavagiri, V.V. Mohalla, Jayalakshmipuram, Gokulam, Paduvarahalli, Metagalli, Hebbal, Vijayanagar and other localities. The fumigation was also aimed at preventing any possible outbreak of epidemics and to prevent mosquito breeding.

The spraying of disinfectant was also carried out at several ATMs and other public places as a sanitisation measure.

Miscreants light fire to garbage: While the entire emergency personnel are busy taking steps to safeguard the health of the public from the dreaded COVID-19, miscreants had lit fire to a heap of garbage on the Jumboo Savari road near Highway Circle this morning. Firefighters, who rushed to the spot extinguished the fire and prevented it from spreading further.

The Fire Department has urged the public not to light fire to garbage heaps, but instead stay indoors as directed by the Government and not trouble others unnecessarily.