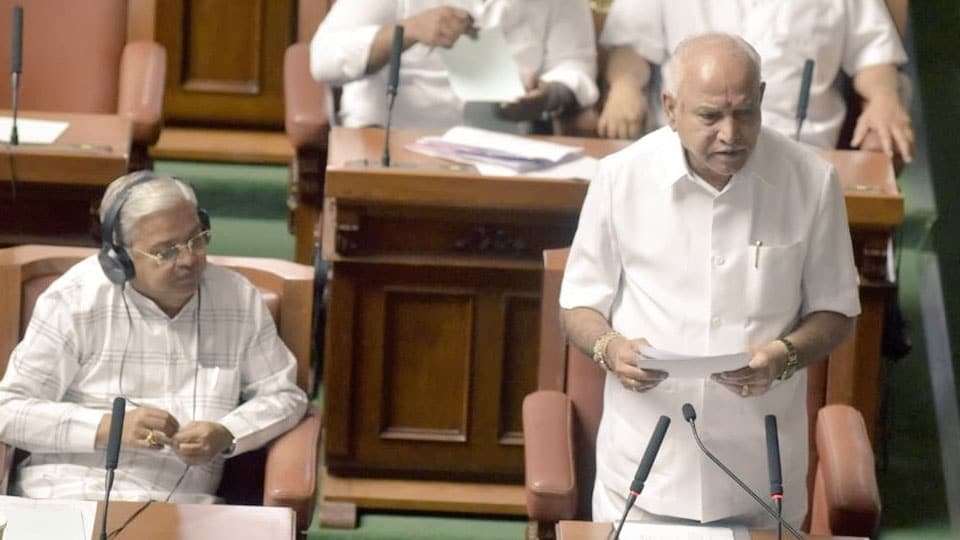 Bengaluru: With more cases of Coronavirus or COVID-19 being reported with the total tally seeing an alarming rise, Chief Minister B.S. Yediyurappa, making a statement on the floor of Assembly, said “The Government had announced a lockdown till Mar. 31 in the entire State to control the spread of virus. To take care of the people coming under APL and BPL categories social security pension of two months would be released in advance. Also, 21 lakh construction workers will be paid Rs. 1,000 per person.

The State is bracing for the possibility of large-scale outbreak said Deputy Chief Minister Dr. C.N. Ashwathanarayana on the floor of Legislative Council, “The State is readying 20,000 beds and 2,000 ventilators to tackle the eventuality and Government has ordered 10 lakh personal protection kits, 15 lakh three-layer masks and 5 lakh N-95 masks in an effort to stem the spread of the disease,” he added.

“Before I start with my reply to the discussion on the budget, I will have to tell one thing. When I assumed office, the difficult situation that existed (floods in parts of the State) and the same situation has cropped up once again,” Yediyurappa said in the Assembly.

READ ALSO  Safaris, resorts in Bandipur, Nagarahole out of bounds

The Chief Minister said that the COVID-19 virus was haunting not only the people of the State, but the entire world like a monster.

Listing out the steps taken to control the spread of COVID-19, including release of Rs. 200 crore, the Chief Minister said though the first coronavirus death in the country was from Karnataka, the Government had been able to control the spread of the virus to an extent. “Everyone, including Prime Minister Narendra Modi, had lauded the steps taken by the State government,” he said.

“We are in the second stage of COVID-19 and it should not go to third or the fourth stage. We have taken measures so that we don’t go into the third stage. I am honestly saying that we have taken steps so that the virus does not worry our people and I am confident that our people will soon come out the fear of this virus,” he said.

Yediyurappa also slammed Opposition parties Congress and JD(S) for boycotting his reply and said he had expected them to join the government in sending a clear message by instilling confidence among people in these difficult times.

Congress on Tuesday boycotted the session, accusing the government of not heeding to the oppositions views and tabling and passage of the bills, despite its reservations, JD(S) too walked out as Speaker Vishveshwar Hegde Kageri did not agree to the party’s demand of allowing them to raise an issue before the Chief Ministers reply on the budget.