Home » News » Probe begins into deaths due to oxygen shortage 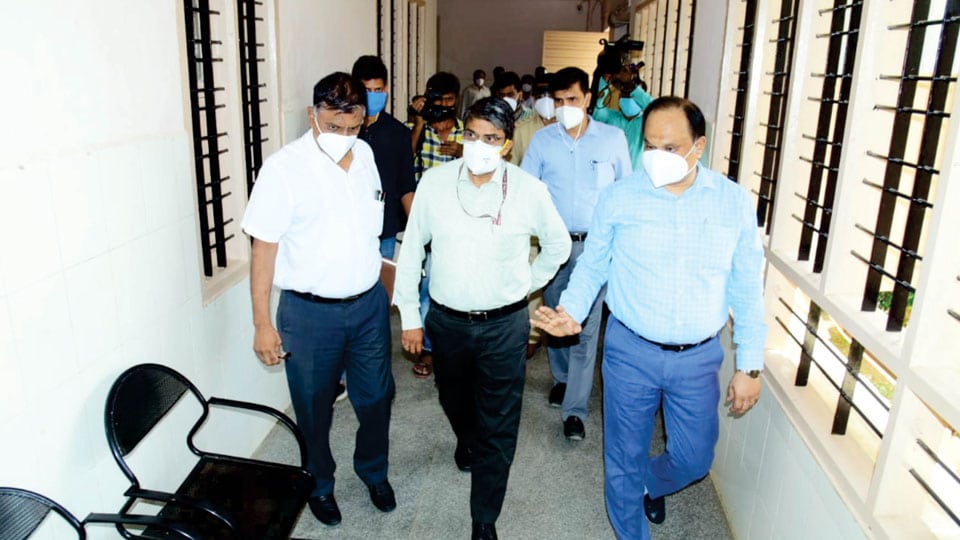 Probe begins into deaths due to oxygen shortage

Chamarajanagar: Senior IAS Officer and KSRTC Managing Director Shivayogi Kalasad arrived in Chamarajanagar this morning to investigate the deaths of 24 COVID-19 patients due to oxygen shortage. The State Government has appointed Kalasad to probe the incident and submit a report within three days.

Along with Kalasad investigation, Home Minister Basavaraj Bommai too has ordered Director General of Police (DGP) Praveen Sood to investigate and submit a detailed report on the tragedy for further action.

Accompanied by Chamarajanagar Deputy Commissioner Dr. M.R. Ravi, Shivayogi Kalasad visited the COVID-19 Health Centre where the tragedy occurred. He met the District Health Officer and the staff supervising the arrangements at the hospital and gathered information.

Kalasad interacted with the people who had come for COVID tests and also verified the facilities at the healthcare unit including the Liquid Medical Oxygen plant, cylinder storage unit ICUs, ventilators and also the wards where patients are being treated. Speaking to reporters, the IAS officer refused to reveal any details. “The probe has begun and I have collected the information. It is too nascent to speak at this stage and the report will be readied in two days,” he said.

During the visit, DC Dr. Ravi lashed out at officials for not admitting a COVID-infected person into the Hospital. “You are just giving statements to the media. First treat the patients on priority,” he told the District Surgeon.

Taking the officials to task, the DC questioned them how the death audit report reached the media.

“The death audit report that was released to the media is not official. Who gave it to the media? It is just a primary report and does not carry anyone’s signature. It becomes official only after the Resident Medical Officer submits a report and if it carries my signature,” the DC clarified.

High drama prevailed at the Hospital premises this morning as a Kannada Chaluvali activist slept on the floor of the Hospital demanding action against people responsible for the deaths. He demanded the resignation of the Health Minister and created a scene in front of the Hospital.

DC Dr. Ravi appealed him to withdraw the protest in view of the seriousness of the issue. When the protester did not relent, the DC, folding his hands, requested the agitator to move aside. When the Police intervened to shift the protester, he told the Police that he would immolate himself with kerosene he had brought. Later, however, the protester was moved aside.