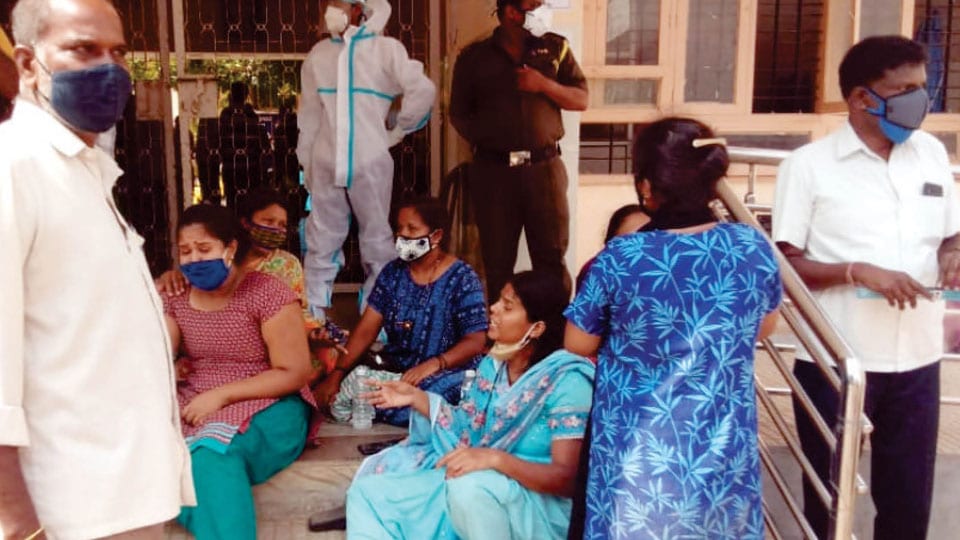 Chamarajanagar: The death of 24 COVID patients in Chamarajanagar District Hospital within 24 hours due to oxygen shortage has sent shock-waves among the relatives of patients who are yet to come to terms with the tragedy.

While a host of VIPs are visiting Chamarajanagar and at a time when Government authorities and political leaders are giving statements to suit their convenience and political leanings, there is no one to console the families who have lost their loved ones in a tragedy that was totally avoidable.

Even as the Government insisted that not all deaths were due to oxygen shortage, the families of the victims accused the authorities for not ensuring at least basic facilities at Government hospitals that are frequented mostly by poor.

“When my brother called me desperate for oxygen at around 7 pm on Sunday, he told me that many patients were gasping for breath as cylinders ran out of medical oxygen. The Liquid Medical Oxygen plant installed at the hospital can store oxygen only for 36 hours. My brother died at 8.30 pm, said a man who was wailing in front of the COVID-19 Health Centre in Chamarajanagar.

An inconsolable woman said that she had got married just two months back and now she has lost her husband. “We did not even go together anywhere and my life has been ruined. How will I lead my life,” she wailed as her relatives took turns to console her. “My relative was married only two months ago and he called me at 12.30 am and narrated the desperate situation. We rushed to the hospital and we received that information that he had passed away,” said another man who has lost his loved one.

“What would have happened if your relatives suffered the same fate?” What were you doing till oxygen supply had run out?” asked a patient’s  relative when MLA Puttarangashetty and DC Dr. M.R. Ravi visited the hospital soon after the tragedy.

Meanwhile, Hanur MLA R. Narendra and Chamarajanagar MLA Puttarangashetty alleged that the Government had suppressed the exact number of dead. “As per as information based on data from various centres in my Constituency, at least 34 people had died. But the authorities are withholding details,” Narendra alleged.

“I spoke to the State Chief Secretary about the oxygen scarcity in the district, but nobody has taken any action. I am in constant touch with the District Medical Officers, all of whom confirm that there is scarcity but the Government is in denial mode,” he said.

The MLAs lashed out at the Government at a press conference they had called at the same venue where Chamarajanagar District Minister S. Suresh Kumar and Health and Medical Education Minister Dr. K. Sudhakar were speaking to reporters. The MLAs’ press conference was objected to by the Deputy Commissioner who claimed that the statistics provided by Suresh Kumar and Dr. Sudhakar were authentic. The DC’s insistence led to a verbal spat and the MLAs left the press conference in a huff.  Meanwhile, Home Minister Basavaraj Bommai has asked the Director General of Police Praveen Sood to investigate the matter and submit a comprehensive report for further action.