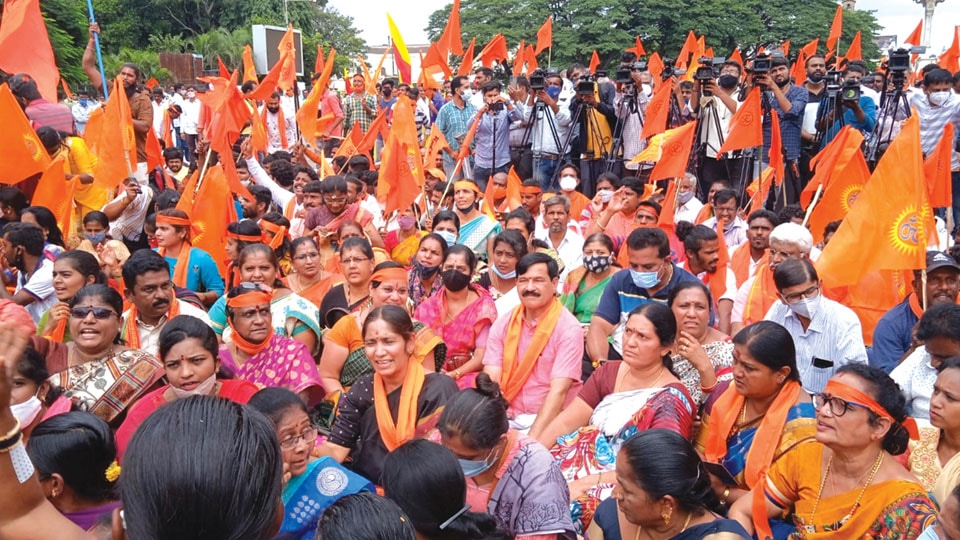 Addressing the protestors, Vedike’s Organising Secretary Jagadish Karanth strongly condemned the district administration’s drive for razing places of worship. Urging the Government to act against all officials who were responsible for the demolition of the centuries old Sri Mahadevamma Byraveshwara Temple at Huchhagani in Nanjangud taluk recently, Karanth set a 10-day deadline to the Government to act against the officials.

Setting a three-point demand to the Government, which included sacking of all concerned officials, reconstruction of the temple in its original form and that the Government should own full responsibility for conservation of places of worship, Karanth warned of staging a massive movement against the Government if it did not act on the Vedike’s demands. Charging the Government of hurting the sentiments of the majority population by carrying out the demolition drive, Karanth came down heavily on the State Chief Secretary (CS) for issuing  the order on demolition.

Wondering why the CS  passed the order in haste without bothering to have a careful look at the Apex Court order, he questioned the Government why it cannot regularise places of worship, when it could do the same in respect of unauthorised residential layouts.

Claiming that the Supreme Court had issued guidelines on the due process to be followed before taking up the demolition, he questioned why the authorities were in such a  hurry to take up the demolition drive. Huchhagani Temple Management Committee member Narasimhe Gowda, who also addressed the protestors, explained the historical significance of the temple.

Later the protestors presented a memorandum to Mysuru Regional Commissioner Dr. G.C. Prakash, who arrived at the venue of the protest.

The demonstration was also witness to a slugfest involving a group of the gathering and BJP leaders, as some protestors raised slogans against the State Government and BJP leaders, when they arrived at the venue. As the group continued to raise slogans, the BJP leaders who were led by MLA S.A. Ramdas, got upset and entered into a verbal argument with the group. However, the argument was short-lived as leaders of both the sides intervened to put an end to the slugfest, it is learnt.