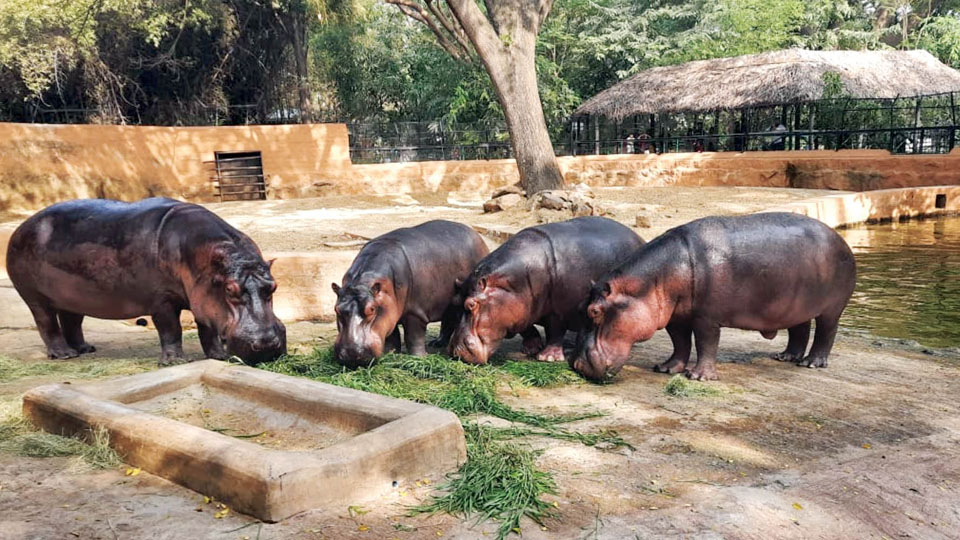 Which animal is most sought-after for adoption? No prizes for guessing. It is either tiger or elephant. Because, these two are the most popular animals in people’s mind and also visually appealing. Also, they figure quite prominently in Hindu mythology along with other animals. But what about Hippo?

It seems so as while everyone wants to adopt big cats, elephants, giraffe etc., there are no takers for the poor Hippos. The Zoo employees say the Hippo has no takers because most people find it visually unappealing and also it does not have any presence in Indian mythology. So for many, it is like a foreign animal.

To add to its woes, the Hippo is not seen in the wild in India, so people and children have not seen it when they go on a forest safari. Because of this, nobody has much information about this unique animal, unless they catch a show on Hippos on National Geographic or Discovery Channels, says Dr. Madan Kompal, the Zoo Veterinarian.

Speaking of Hippo being unique, Dr. Madan said, they are one of the toughest animals, most aggressive when agitated, have powerful jaws and give birth in water.

He further adds that though Hippos spend most of their time in water, they cannot breathe underwater and have to come to the surface for intake of air. They sleep with their heads under the water and have to resurface every three to five minutes to breathe. The process of resurfacing and breathing is automatic, which means a Hippo which is sleeping underwater will resurface and breathe without waking up or this process is done by them unconsciously.

Hippo in ancient Greek translates to “river horse” yet modern science linked the animals to pigs. The most recent studies have found they are more closely related to whales.

Mysuru Zoo has five male and four female Hippos aged between three and 45 years. They mostly remain submerged in water to remain cool and once they are out of water, they secrete an oily red substance (which is mistaken as blood) that acts as a moisturiser to protect themselves from germs. In the wild, Hippos forage for food during night and considering their enormous size, their food intake is relatively low.

Another interesting fact is Hippos give birth in water and give milk to the newborn calf underwater. In the wild, Hippos live for around 40 years, while in captivity they tend to live longer and may reach up to 50 years.

Dr. Madan Kompal said that Hippo dung was helping the Zoo in manufacturing vermicompost which is sold to the public.