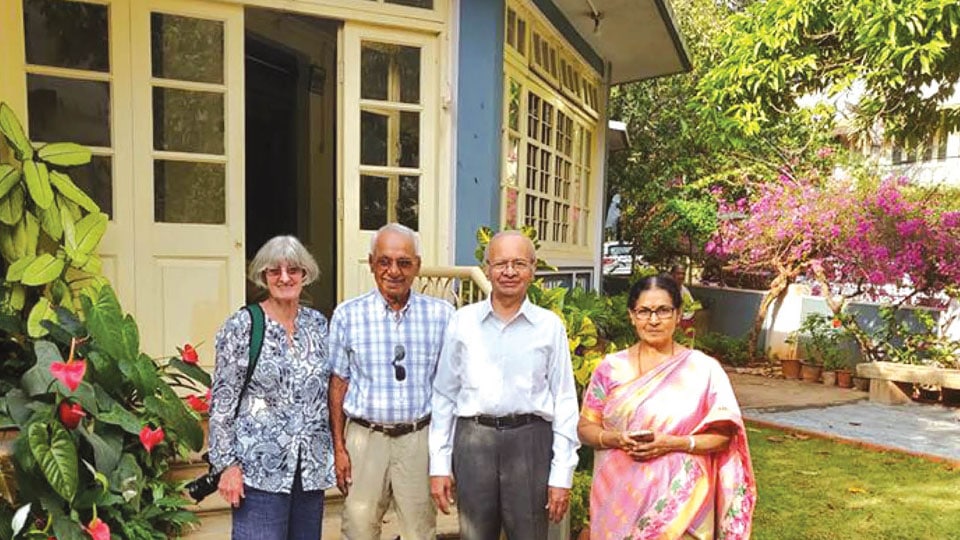 Chaitra, as he is fondly called, 78, after completing his engineering from BMS Engineering College, Bengaluru, was working in HMT. He left India when he was posted as the Head of Sales and Service Centre of HMT in Melbourne.

Kuvempu’s son-in-law Dr. K. Chidananda Gowda, former Vice-Chancellor of Kuvempu University, speaking to Star of Mysore here this morning said, “Chaitra visits Mysuru once in two or three years. This time when he came, he wanted to walk up to his aunt’s house on Kalidasa Road which is on the same road as Udayaravi. She is the sister of Kuvempu’s wife and mother of Krupakar (of the famous wildlife photographers Krupakar-Senani duo).”

Chaitra and his wife Marlene, who walked on the road were very disappointed as they found it very difficult to negotiate the stretch with cars and two-wheelers parked on both sides and hardly any footpath. “They told me how much Mysuru has changed. It is very sad that pedestrians are completely ignored and there is no place for them to walk unlike in Melbourne where there is so much of space for pedestrians to walk,” said Dr. Gowda.

Recalling the time when Chaitra had called Kuvempu, when he had an offer from an Australian company, to ask what he should do, Dr. Gowda said that Kuvempu had asked him (Chaitra) to serve the nation by continuing to work for HMT and not be tempted by the four times higher salary that was offered to him.

Chaitra continued to work in HMT till it was shut down and then joined a private firm from where he retired in 2014.

Kuvempu had four children Poornachandra Tejaswi, Kokilodaya Chaitra, Indukala and Tarini. Out of the four, Tejaswi and Indukala have passed away.

“Kuvempu believed in rebirth and always felt that Chaitra was reborn after the passing away of his (Kuvempu’s) father because before that his father would always appear in his dreams and after Chaitra was born the dreams ceased. He has recalled this in his autobiography ‘Nenapina Doniyali’ and also revealed how Chaitra as a one-and-a-half or two-year-old, on reaching Kuppalli had immediately said ‘mane banthu, mane banthu,’ proving his strong faith that  he (Chaitra) must be his father’s reincarnation as otherwise how could a two-year-old who had never seen his grandfather’s place identify the house,” said Dr. Gowda.

Asked how Kuvempu reacted to Chaitra marrying an Australian, Dr. Gowda said that when he (Chaitra) told his father that he was going to marry Marlene, all Kuvempu said was that he had no objection and he was responsible for his decision and all he could do was bless the couple.

Marlene, who retired as a Registrar working in a University in Melbourne, is very fond of photography. She has won several awards in photography competitions around the world.

“Photography is Marlene’s hobby. This time she visited Mysore Zoo and took pictures. She and Chaitra drove via Kanakapura and visited Somanathapura temple and took photographs there before reaching Mysuru. She also hired an autorickshaw and went to Paduvarahalli, and a few other places and took photographs of women milking the cows,” said Dr. Gowda.

Chaitra and Marlene, who have a daughter Shivani, are in Bengaluru now and will be returning to Melbourne shortly.