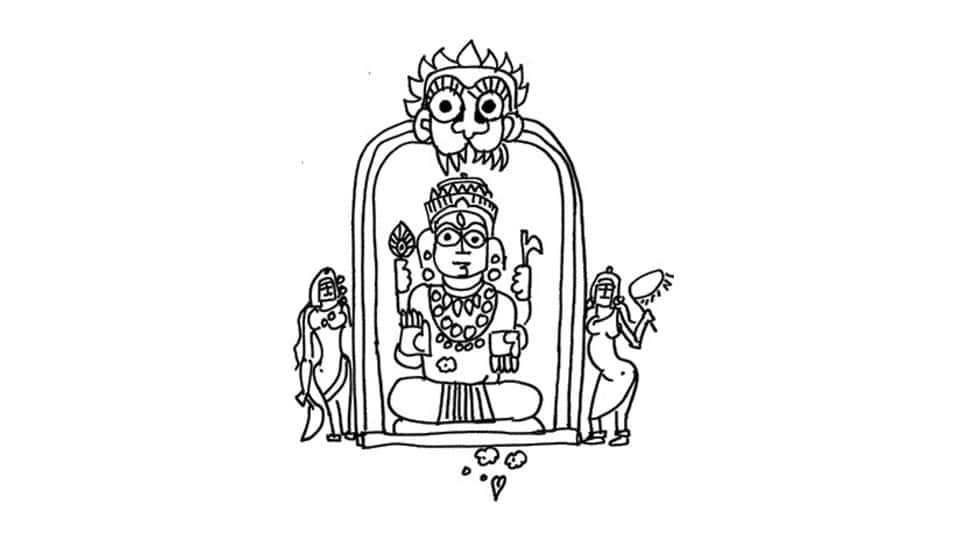 How the temple became the hub for an economy

Vedic Gods resided in the sky. They were unbound by geography. Temple Gods are firmly bound by geography. Jagannath is firmly linked to Odisha, Tirupati to Andhra Pradesh, Nathdvara to Rajasthan. The temple as we know it today is closely linked to land given by kings to village Gods via Brahmins, a practice that became widespread 1,500 years ago. Through the temple, the wealth generated from farms was circulated among weavers, garland makers, dancers, and musicians, who contributed to the many rites, rituals and festivals of the temple. It created an economy.

Before entering a temple, therefore, it is important to recognise the bazaars around it, for it is that which indicates the temple is prosperous with many visiting pilgrims who buy stuff from these shops and support the local economy. The shops provide sweets and cloth and lamps that the pilgrim will offer to the deity. The shops also provide food, accommodation and souvenirs to the travellers. It is around the temple we realise the local arts and crafts, local cuisines.

Temples are typically built on a plinth, a height to prevent it from floods. A flight of stairs takes us up the plinth. Older temples at Khajuraho, Old Bhubaneshwar and Mamallapuram did not have walls around them. But when invasions and attacks became common, massive walls were built. The enclosure includes water tanks and orchards, that were once the original sacred spaces, before they were eclipsed by man-made structures.

In South Indian temples, there is a unique gateway known as Gopuram. It originated in the times of Vijayanagara to proclaim the splendour of the king. Series of gateways, created by later kings, grew taller in size. They are covered with images of Gods and Goddesses and remind us of the statues of Vikramaditya’s throne telling stories of heroes of yore. In earlier times, before Gopuram, the gate was indicated by a free-standing torana, marking the entrance, that separates the world of man from the world of Gods. The earliest toranas were raised in front of Buddhist Stupas.

The walls around the temple are decorated with images that tell you stories of Gods and Goddesses. There is usually a circle of nymphs said to usher in prosperity. And there is a circle of ferocious beasts and monsters who offer protection. Entrances are marked by the river Goddesses, Ganga and Yamuna, who make the temple a ‘sangam’ and remind us that all temples in India seek to evoke the auspiciousness linked to Prayag-kshetra, the birthplace of Vedic culture. A pair of door-keepers, who look like fierce manifestations of the deity inside, ushers in the devotee. If it is a Shiva temple, then the pair is Vetala-Bhootnath. If it is a Vishnu temple, the pair is Jay-Vijay. If it is a Shakti temple, the pair is Maya-Laya.

Once you cross the gateway, you can often find free standing pillars. There is the Dhwaja-stambha for flags. The authority and power of the temple reached as far as the flags could be seen. Atop some pillars, you find images of Garuda praying to Vishnu or Aruna praying to Surya. This was probably inspired by Mana-stambha found in Jain temples. In Maharashtra, you find the Deepa-stambha, pillars lined by lamps that are lit during Mahashivaratri. Temples in Rameshwaram and Madurai are famous for their corridors which are lined with pillars. They are also famous for their ceilings which are painted with vibrant colours. The main temple usually has pillared halls where devotees gather to see the deity. These are the pavilions known as Mandapas. These are not found in older temples.

Decoding Mythology Dr. Devdutt Pattanaik
COVID vaccination: A memorable experience
Afghanistan: A country where anarchy is for ever !