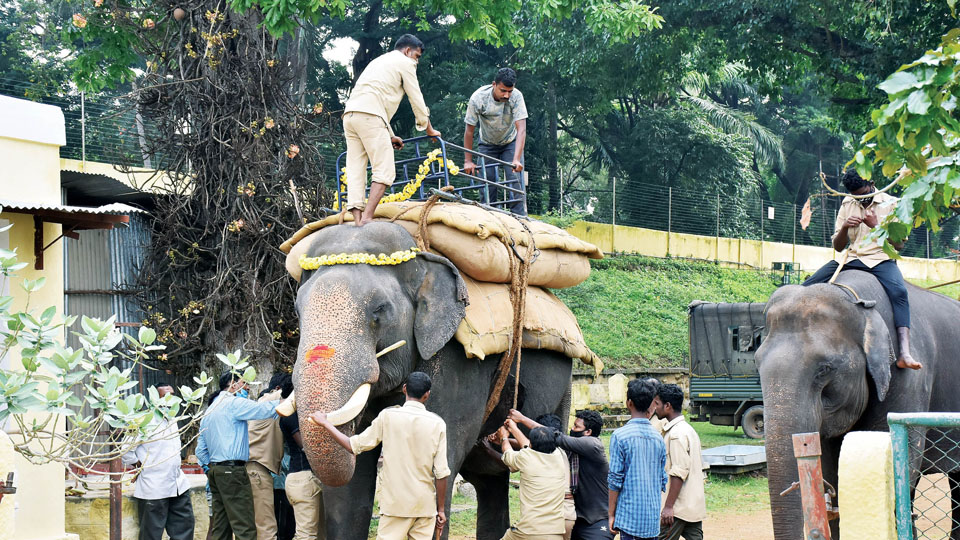 Mysore/Mysuru: Dasara elephant Abhimanyu, which has been given the responsibility of carrying the Golden Howdah on Jumboo Savari day, began his training by carrying 350-kg sand bags this morning inside the Palace premises.

Before the commencement of weight training, puja was performed at Kodi Someshwara Temple in Palace premises and to the Gaadhi Namdha (a cushion-bed-like material). It was then fastened on the back of Abhimanyu with a leather strip and ropes and then a cradle-like structure was tied on top of bed.

Cotton and other soft materials were placed between the ropes to prevent bruises. Sand bags weighing 350 kg (including Gaadhi Namdah) were placed inside the iron cradle today which would be gradually increased so that Abhimanyu would be able to carry the 750-kg Ambari on Jumboo Savari day easily.

Abhimanyu, with his Mahout Vasanth walking next to him and the weight on his back, led other elephants Vijaya, Kaveri, Gopi and Vikram during the training, which was supervised by Deputy Conservator of Forests (DCF) M.G. Alexander, Veterinarian Dr. Nagaraj and elephant caretakers Rangaraju and Akram.

It may be recalled that Abhimanyu had participated in Srirangapatna Dasara and had carried the wooden howdah (Ambari) four times and was also carrying the 750-kg wooden howdah during rehearsals for Jumboo Savari during previous Dasaras.