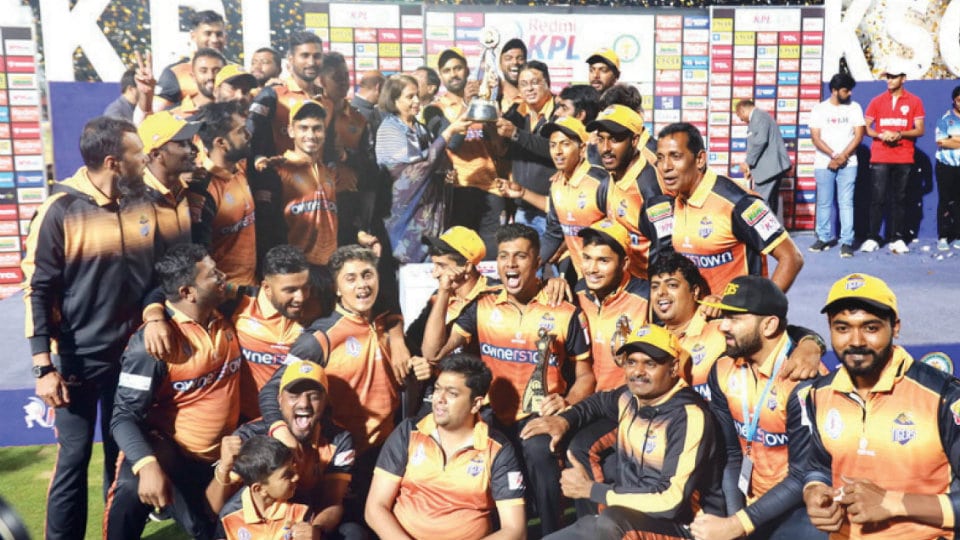 R. Vinay Kumar’s faith in his bowling unit paid off as the Hubli Tigers defended a meek score against Ballari Tuskers to be crowned champions in the eighth edition of Karnataka Premier League (KPL).

With member of erstwhile Royal Family Pramoda Devi Wadiyar and over 2,000 people in attendance at the SDNR Wadiyar Stadium yesterday, the Tigers plugged away despite putting up only 152 for 6 in 20 overs. The Tuskers got back into the match after a shaky start through Devdutt Padikkal (68) and C.M. Gautam (29), but the Tigers rallied on crowd support to restrict the former champions to 144 all out in 20 overs, securing an 8-run win.

Padikkal was at his belligerent best on the night, scoring a smashing 68 runs from 48 balls, but his effort just wasn’t enough in the end. Abhilash Shetty (3 for 34) and Aditya Somanna (3 for 24) were the architects of this victory as the pacers picked up three wickets each in Tigers’ maiden triumph.

One couldn’t help but wonder if Vinay Kumar had made the right decision, opting to bat first on this sticky strip. It’s likely that the call was made on their performance in the previous game. In the Qualifier 2, they notched a 26-run win over the Belagavi Panthers after putting up just 154 runs. While they were asked to bat first on that occasion, in the final they had a choice to make.

Evidently, the gamble didn’t pay off when Prasiddh Krishna ran riot with his pace and K.P. Appanna returned figures of 2 for 19 from his four-over quota.

Somanna (47) and Luvnith Sisodia (29) came together for the third-wicket and added 62 runs to raise hopes of a big score, but Tuskers’ bowling kept a lid on it. Had it not been for a late charge from Pravin Dubey (26 not out) and Shreyas Gopal (14 not out), the Tigers wouldn’t have crossed 150.

Tuskers’ response was anything but ideal as they lost three wickets inside the first four overs. They needed something special to win this game. A big partnership would go a long way in the cause, and the Padikkal-Gautam alliance delivered just that as they added 75 runs in 66 balls to take the team to 100.

Gautam fell to a silly stroke when the team needed 53 from the last five overs, but Padikkal wouldn’t let the occasion get to him, yet. Coming into this contest with three half-centuries under his belt, Padikkal needed only one quality knock to cement his place as a star in the league. He managed to establish his status by picking up the Orange Cap with 310 runs from eight innings, but his dismissal to Somanna in the 19th over meant he wouldn’t lift the trophy.