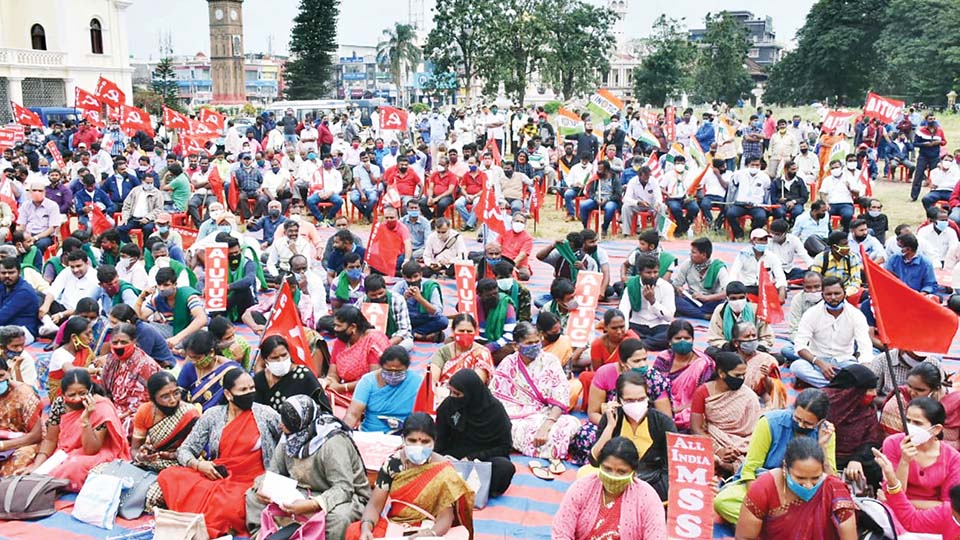 Mysuru:  Condemning anti-labour policies and steps being taken to privatise Railways and LIC among others by the Centre, hundreds of members of Labour Unions, following a Nationwide protest call given by various organisations, staged protests at various places in city this morning.

At Town Hall: ASHA, Anganwadi and Mid-Day Meal Workers, numbering more than 300 and under the banners of AIDSO, AIUTUC and Scheme Workers Federation of India (SWFI), staged a protest urging the Government for fulfilment of  their various demands.

The demands include considering ASHA, Anganwadi and Mid-Day Meal workers as Government employees and fix Rs. 21,000 salaries to those who are working as daily wagers, contract and outsource employees by making them permanent; Rolling back National Education Policy (NEP) as it would render the closure of Anganwadi Centres and making Anganwadi workers jobless; Stopping the proposed privatisation of Railways, BSNL, Banks, LIC, Public Sector Undertakings etc.

The demands also included to take back laws which are against labourers, farmers etc.; To provide salaries for a minimum of 200 days under Mahatma Gandhi Employment Guarantee Scheme in rural places, which should be extended to urban places; Transfer of Rs. 7,500 to the families who are outside income tax limits and provide 10 kg rice to the needy every month and pension to all among other demands.