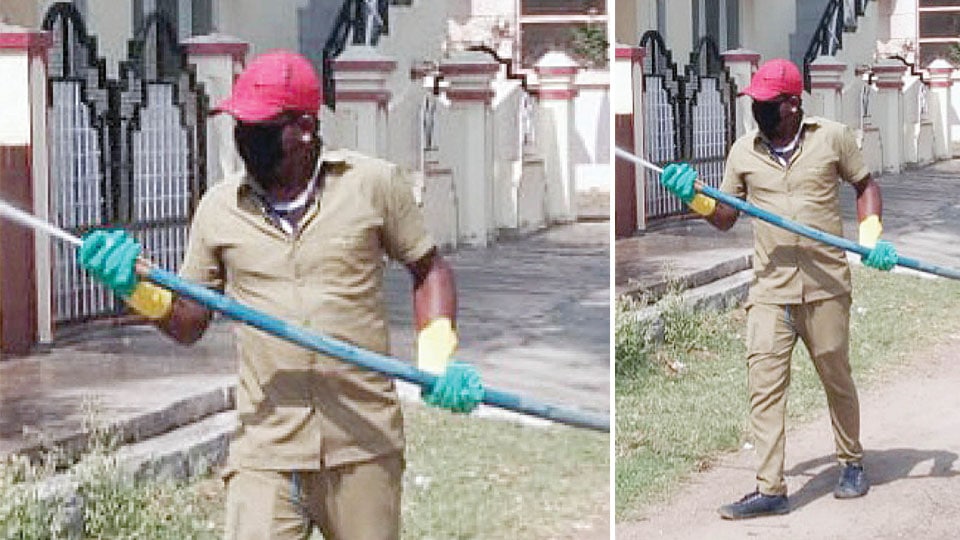 Mysuru:  Are you good in costume designing? Then you can win Rs.10,000 by crafting dress for Safaimitras. Mysuru City Corporation (MCC) is holding a contest for designing uniform for Safaimitras (Under-Ground Drainage cleaners and helpers) and has asked citizens and fashion designers of the city to take part in it.

In a press release, the Executive Engineer, UGD Division, MCC, has put forth three conditions for those taking part in the contest:

1.  Costume design should be a comfortable wear for Safaimitras; 2. It should bear the logo of Safaimitra Challenge, Swachh Bharat and Mysuru City Corporation; 3. Costume should have pockets to keep tools like spanner, screwdriver and contain all safety equipment.

Last date for submission of the design is Dec. 1, 2020. Most innovative and attractive design will be selected as winning design and the winner will be given a cash prize of Rs.10,000. Other participants will be given certificates. For details, visit www.mysurucity.mrc.gov.in or call Mob: 74068-85654 or 90368-69654.

An Engineer of the MCC UGD Division told Star of Mysore that the Government of India conceived the idea of designing a common uniform for all Safaimitras across the country and christened it as ‘Safaimitra Suraksha Challenge.’ The initiative was announced on Nov. 19 which happened to be World Toilet Day.

The Department concerned wrote to all the Urban Local Bodies (ULBs) to hold a contest for designing uniform for Safaimitras and the best costume design will be made applicable throughout the country.

READ ALSO  Why not a public website for info on MCC expenditure?

Besides, the Government of India has announced a special fund of Rs.12 crore for that ULB whose design will bag first prize. The second prize will carry a cash prize of Rs.9 crore.

She said the motto of the Union Government has been ‘One Nation – One Uniform.’ The MCC has been asked to present its design of uniform dress on Dec.5. Lot of specifications had been given for the enthusiastic fashion designers to craft the suitable uniform. The prize-winning costume design will be announced on Aug.15, 2021 on the occasion of Independence Day. Then, that costume will be made mandatory for all Safaimitras of all ULBs across the country.

According to the MCC Officer, as per the Central Government guidelines, it was mandatory for the Corporation to provide the khaki uniform, face mask, gumboots, goggles and disposable hand gloves. However, they prefer using the rubber gloves because they find it comfortable in handling machinery and cleaning equipment. The MCC has to provide them with disposable gloves but it has not been possible owing to financial crunch.

How will MCC spend Rs.12 crore, if it wins contest

The Officer said the MCC will spend the winning amount on buying jetting and rodding machines and the purchase of other safety gadgets for Safaimitras. Unfortunately, UGD Division did not have any special allocation of funds as it is merged with Drinking Water Division.

In Mysuru, there is a need to  upgrade UGD system following increase in load due to rise in population. Expenditure is increased on sewage treatment and bio-culture treatment. So, the MCC collects nominal charges for the removal of choked UGD connection as fixed by the State Government in 2011. Of the total amount collected, 60 per cent goes to Drinking Water Division and 40 per cent to the UGD Division.