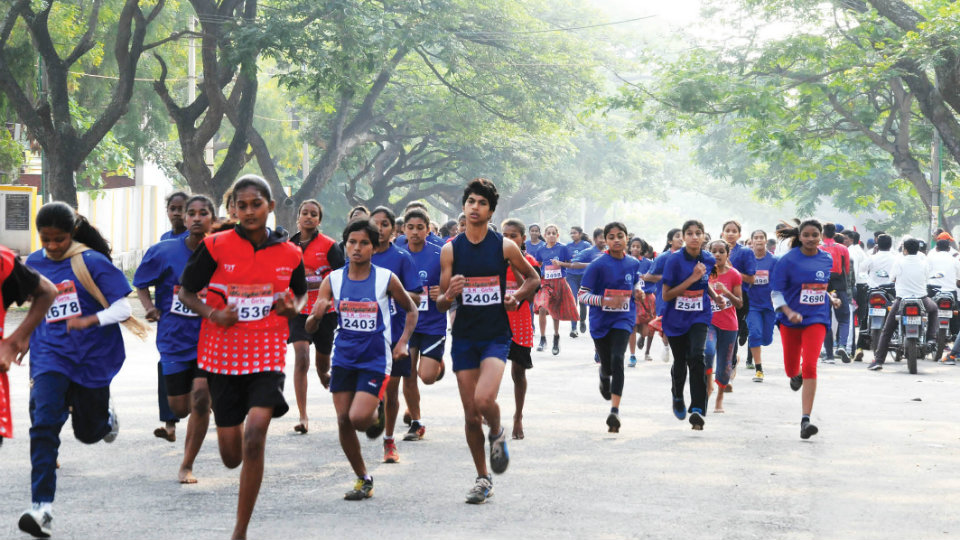 Over a thousand enthusiastic runners took part in the Dasara Marathon-2018 conducted by the Department of Youth Empowerment and Sports (DYES) jointly with the Karnataka Olympic Association (KOA) and District Administration at the University Oval Grounds here this morning.

The official invitation mentioned the venue as Chamundi Vihar Stadium, though was updated later on that the event will be held at Oval Grounds.

When District Minister G.T. Devegowda, Tourism Minister S.R. Mahesh and MLA Nagendra arrived at Oval Grounds, the organisers were waiting for the arrival of the Small Scale Industries Minister S.R. Srinivasa (Vasu), who was scheduled to inaugurate the event and hence all the guests left the venue to come back later.

Hence, GTD and Mahesh launched the run at the Oval Grounds as it was already late by an hour. However, once again the official flag off was done by Small Scale Industries Minister at the Starting Point of the Marathon, opposite Yuvaraja’s College Gate.

He said that the Government has taken encouraging initiatives this year in conducting the games in all Olympic disciplines and have given more emphasis in encouraging the winners by enhancing the prize money.

DJ Music extended for an hour

DJ music is played for a few minutes prior to the marathon for participants to warm up. However, as the organisers waited for the Ministers, the DJ music went on for an hour and though the participants enjoyed the fun and frolic with DJ music, some athletes were heard saying that it made participants drain their energy dancing rather than running.