Home » News » I am a target as I speak truth, says former CM Siddharamaiah 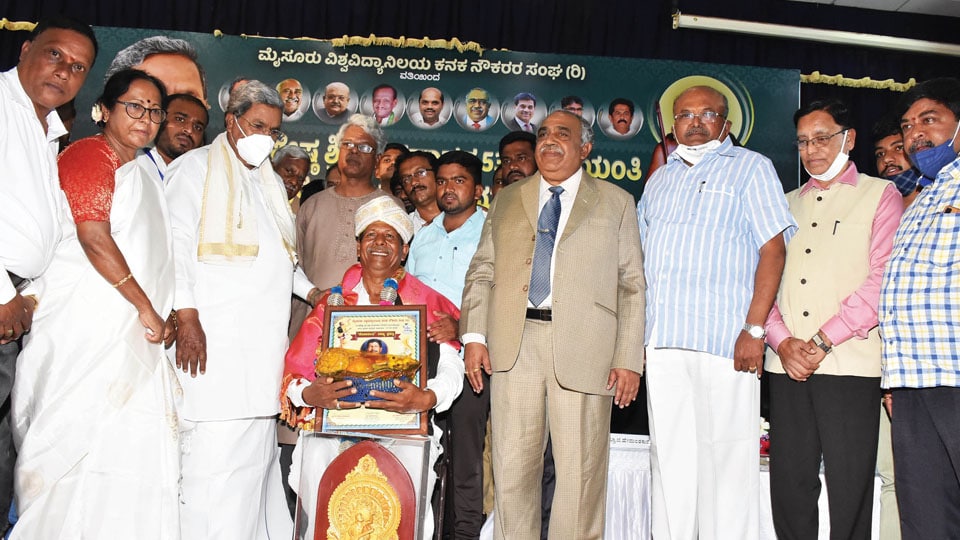 I am a target as I speak truth, says former CM Siddharamaiah

Mysore/Mysuru: “I am being targeted for speaking the truth and I don’t hesitate to speak what is right. While speaking truth, I end up in controversies. And this is the reason why I am being criticised and targeted by people owing allegiance to different political parties and ideologies,” said former Chief Minister Siddharamaiah. He was speaking after inaugurating Kanakadasa Jayanti and Pratibha Puraskar programme organised by Mysore University Kanaka Employees Association at Rani Bahadur Auditoriumn city yesterday.

Siddharamaiah said that many of his co-workers hesitate to take a stand on certain issues, fearing consequences or backlash. “I had once said in the Assembly that I eat cattle meat, who are you to ask? It is my right, food habit is my right, and who are you to question? If you don’t eat, leave it, I’m not going to force you. This statement was used by vested interests to target me and my words were all over the media,” the Leader of Opposition in the State Assembly said.

BJP people don’t have any other work, they look for emotive issues. “My statement about beef and the culture of a particular community has been misinterpreted by the media. I regret if that has hurt the sentiments. We have various food traditions and habits. Be it goat or sheep or chicken or pork or beef. I meant that it is wrong to link religion and food habits. I never intended to say any community eats beef. It is a matter of individual choice,” he said.

“I will not change my stand no matter whether I am in power or not and will always adhere to my conscience. But, a few people have been misleading others about me. I never use religion as a tool to achieve my political agenda, but whereas BJP and RSS do it to achieve its political agenda,” the former CM said.

Siddharamaiah said that the true celebration of Jayantis lies in following the principles advocated by great saints, philosophers and leaders. “It is equally important to propagate the values preached by saints and philosophers like Kanakadasa. Everyone must understand the life of all achievers and personalities. Earning multiple degrees is of no use until we develop human values,” the Congress leader said and advised the University to establish a statue of Kanakadasa inside the campus.