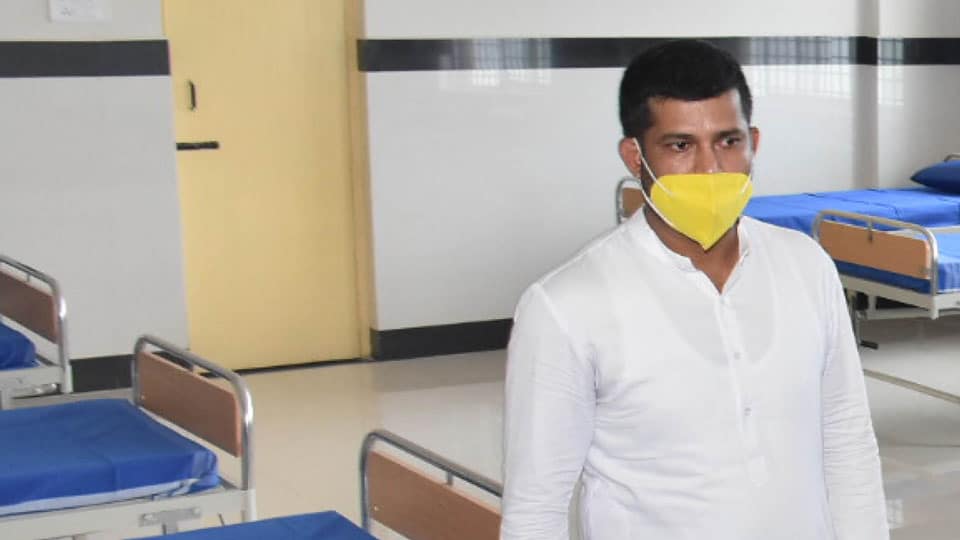 A  week after he was appointed by District In-Charge Minister S.T. Somashekar as In-Charge of Task Force on Medical Oxygen and Remdesivir injection supplies in the District, Mysuru-Kodagu MP Pratap Simha has maintained that there is not even a single complaint on any lapses in the distribution of these two vital medical requirements. In a telephonic interview to Star of Mysore, the MP, who is recovering from COVID, spoke about his efforts in detail. Excerpts. —Ed

Star of Mysore (SOM): Is there any improvement in Oxygen and Remdesivir supplies in the district after you took over as Task Force In-Charge following the Chamarajanagar tragedy?

In fact, upon coming to know from my media friends that Chamarajanagar was facing acute oxygen shortage, on the night of the previous day of the incident, I tried to contact Chamarajanagar Deputy Commissioner. After failing to contact the DC, I called the Control Room and asked the phone receiver to inform the DC to call me. I received a phone call from the DC at 11 pm that night when the DC told me that there was an urgent need for 50 cylinders of oxygen. I immediately made arrangements to dispatch the oxygen cylinders to Chamarajanagar, following which I tweeted about the same.

However, unfortunately a big tragedy happened and Mysuru District Administration was falsely blamed for it. After the tragedy, there were cries of oxygen shortage at Hospitals in Mysuru and Mandya districts too, following which Mysuru District Minister S.T. Somashekar held a meeting. A day later, I was appointed as In-Charge of the District-level Task Force for streamlining Oxygen and Remdesivir injection supplies. Now, as you can see for yourselves, things have improved a lot with no complaints on Oxygen or Remdesivir.

SOM: Emergency supply of Oxygen was a big challenge. How was it possible for you to streamline in such a short duration of 3-4 days?

Pratap Simha: Soon after my appointment as In-Charge of Oxygen and Remdesivir supplies on May 7, I collected vital data on the number of oxygenated beds in Government and Private Hospitals and their daily oxygen needs. Although the Nodal Officer in charge of bed management at KPME (Karnataka Private Medical Establishments) registered hospitals was callous in responding to my queries, I got the  vital data after a stern warning. In the meantime, I was in constant touch with Oxygen agencies such as Padaki Air Products, Mangala Ravi Agencies and Peenya Industrial Gases Pvt. Ltd. for supply of Oxygen on demand. As I was talking to them, they complained about non-supply of liquid oxygen and about the pressure of officials from neighbouring districts for oxygen delivery, which complicated the situation. Thereafter, I formed a WhatsApp group of representatives of Private Hospitals in which they were asked to provide information about their oxygen availability and further needs at least 4-5 hours in advance.

At the same time, I got installed CCTV cameras at all the oxygen agencies and refilling units and appointed a Nodal Officer to monitor oxygen deliveries.

This apart, I maintained constant touch with Liquid Medical Oxygen (LMO) manufacturers — Praxair at Ballari and Bhoruka Gases at Bengaluru —  to get regular information about the quantity of LMO dispatched from the two units on a daily basis. I also directed the authorities to collect information from the supply agencies about the quantity of oxygen supplied to K.R. Hospital and other Hospitals. Besides, I streamlined oxygen supplies to all Private Hospitals, for which a Revenue Inspector was appointed at every agency. Also, we have submitted a list of agents, who are cheating  people with the false promise of free supply of oxygen, to the City Police Commissioner. All these efforts have borne fruit, with the system back on right track.

SOM: Is there an increase in Oxygen supplies after the formation of Task Force?

Pratap Simha: Following complaints from agencies that Mandya District authorities were forcibly taking away oxygen cylinders, I spoke to Mandya officials asking them to seek only the quantity that they require and not in excess. I also requested Mandya District Minister K.C. Narayanagowda to talk to the authorities concerned on getting a higher quantity of LMO. In the meantime, out of the 16 KL of oxygen that was available on May 9, 12 KL was supplied to Mysuru’s K.R. Hospital and the remaining 4 KL was used for filling 110 cylinders, out of which 70 were dispatched to Hospitals in Mysuru and 40 to Mandya. But as there was a forecast that Mysuru would become short of oxygen, I spoke to Anil of Praxair and appealed him to dispatch 10 KLMO of oxygen from his company’s re-filling station at Dobbaspet near Tumakuru.

Later, I sent an empty oxygen tank to the re-filling station under escort  which returned to the city at 4 pm on May 10 after getting fully loaded with the life-saving gas. I must say that this action has played a crucial role in the distribution of oxygen in the district. There are 104 hospitals in the district that are treating COVID patients and no hospital, whether Government or Private, has complained of shortage of oxygen till now since Monday last. There is just about enough oxygen stock for now, with the district not having even                               one KL in excess of the requirement.

SOM:  Is there enough Remdesivir stock?

Pratap Simha: There are some glitches in official distribution of this vital vaccine as some Private Hospitals have failed to deposit money. Following the District Minister’s talk with Union Minister D.V. Sadananda Gowda, Mysuru district is getting 3,000 vials of the injection daily since the past 3 days, most of which is being supplied to Government Hospitals. It is true that more Remdesivir vials are required for the district and it is hoped that the supplies will meet the demand in a couple of days.

SOM: Is bed blocking mafia in operation in Mysuru ?

Pratap Simha: There are more than 40 Hospitals in Mysuru that have over 30 beds and a Nodal Officer has been appointed for each of these Hospitals for bed management. So far, there are no complaints of bed blocking. A Task Force for bed management has been formed under the leadership of MUDA Chairman H.V. Rajeev. A comprehensive information on the availability of cumulative beds in Private Hospitals is being gathered and it is proposed to launch a website on bed availability on real time basis.

SOM: Is there shortage of cylinders for supply to additional oxygenated beds?

Pratap Simha: There is a need for augmenting oxygen supplies if the number of oxygenated beds in Trauma Centre, PKTB Sanatorium and Taluk  Hospitals are increased in significant numbers.

The Department of Industries and Commerce was asked to get in touch with Industries for supply of oxygen cylinders, following which the city has got a total of 733 cylinders, including 13 from Automotive Axles, 3 each from Rishi FIBC and Gromax papers, 5  each from Triton Valves and Triveni Engineering, 10 from Asian Paints, 145 from Mangala Ravi Agencies, 239 from Southern Gas Agencies, 160 collectively from 15 industries coming under Peenya Industrial Gases Pvt. Ltd. and 150 from Mohanty Company.

SOM: How is the District Administration prepared to tackle a possible third wave of COVID attack?

Pratap Simha: The Union Government has sanctioned 31 oxygen manufacturing plants to 31 District Hospitals including the one in Kodagu. These plants will have a production capacity of 1 KL of LMO per minute. This high capacity plant will come up in Kodagu in the next 10 days and moreover, Mysuru too will get a high capacity plant by the end of this month. Besides there are plans to set up oxygen plants in all Taluk hospitals.

Apart from this, all other preparations are underway for tackling the third possible wave. The third wave is anticipated to affect children the most and as such discussions with Paediatricians and other child care specialists have already begun in right earnest to tackle this deadly pandemic. I reassure that the Government has begun preparations much in advance for preventing the outbreak of the third possible wave of COVID-19 attack.