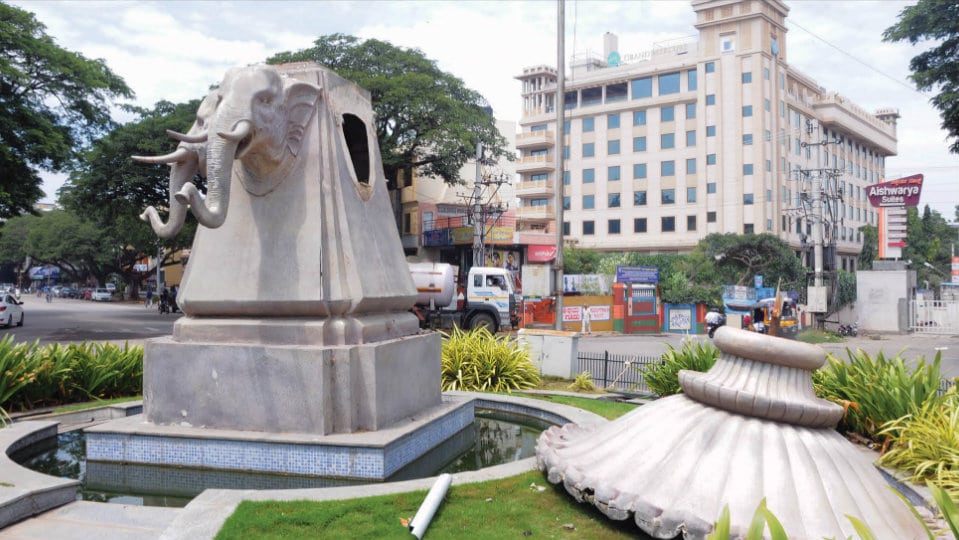 Mysuru: The iconic elephant sculpture fountain, a gift by the Brigade Group, at Maulana Abul Kalam Azad Circle, popularly known as ‘Highway Circle,’ which already has been subjected to repeated vandalism by political parties and private organisations by sticking posters, has been vandalised yet again for the third time.

This time it is not disfigured by sticking posters, but the flower structure on top of the sculpture and the elephant head towards the north side has been broken.

According to sources, some persons had climbed atop the sculpture to install decorated lights between 10.30 pm and 11.30 pm last night, during which the floral structure broke and fell, bringing along the elephant head and also the person on top. The person suffered severe injuries.

The staff of Grand Mercure, a hotel by the Brigade Group, who noticed the vandalism, informed Mandi Police, who rushed to the spot and inspected. The Mandi Police is said to have told the hotel staff to also inform N.R. Police as there is a confusion about the jurisdiction of the Circle.

Meanwhile, Shashikiran, HR Manager of Grand Mercure told SOM that earlier, a truck had rammed into the Circle destroying the iron grills. Luckily, the sculpture was not damaged then, he added.

He further said that they contacted the authorities concerned in this regard and later, Brigade Group got the Circle repaired. But now, the sculpture itself has been damaged by vandals, he added.

Shashikiran further said that they would file a complaint with the jurisdictional Police. The statue before vandalism.

B.R. Suchendra, Branch Head, Brigade Groups, Mysuru, speaking to Star of Mysore said that as per the letter from the MCC, Brigade Groups was given permission to develop the circle and maintain it for 11 months, which they did and after that it is the responsibility of the MCC to maintain it.

Suchendra further said that be it MCC or Brigade Group, it is also the responsibility of everyone to safeguard all public structures of the city and help the civic authorities in maintaining the beauty of our heritage city.

The Circle was being maintained by Brigade Group, which gifted this sculpture with the fountain costing about Rs. 25 lakh to our city. The Group maintained it from 2016 to 2017 and later it was the responsibility of the civic authorities to maintain the Circle and see to it that such vandalism does not recur which mars the beauty of Heritage City.

Following vandalisation of the sculpture and publication of a letter titled ‘Elephant Circle vandalised yet again. Will City Corporation act?’ (Star of Mysore dated June 27, 2017) and KBG’s ‘Point Blank’ titled ‘Vandalising iconic public sculptures, buildings etc.’ (SOM dated June 28, 2017), the Mysuru City Corporation (MCC) Public Relations Officer, in a press release, had clarified that the civic body has been conserving the beauty of the city and cases have been registered at various Police Stations against organisations found disfiguring public places under Prevention of Disfigurement Act, 1981.  But till today it is not known whatever happened to these cases, if at all they were filed.

The Act states that such      an act is a crime and the offenders could be sentenced to one year imprisonment along with penalty.