Home » Columns » Abracadabra By K. B. Ganapathy » If you are a Nationalist you will protect public property 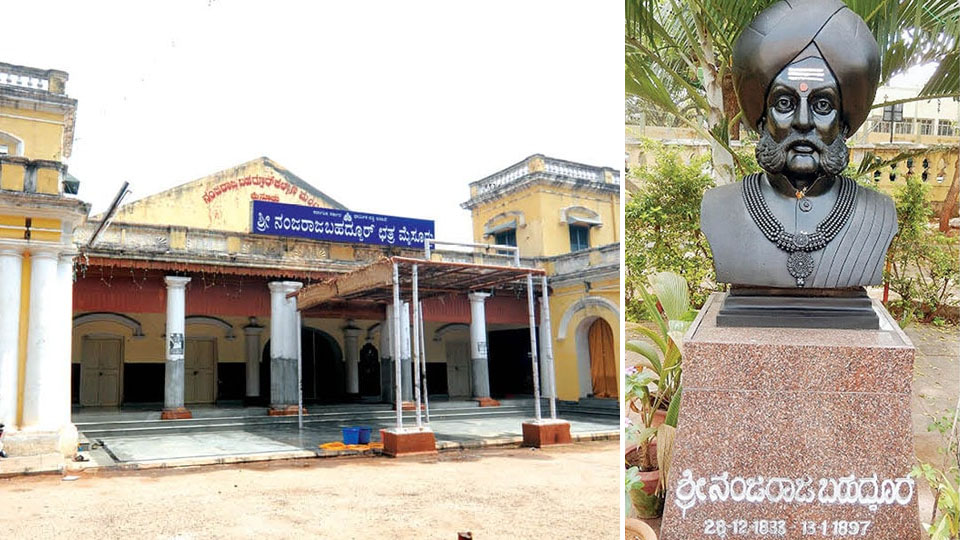 If you are a Nationalist you will protect public property

Recently when I read a report about the famed Nanjaraja Bahadur Choultry my thoughts went rambling about our country getting independence after Muslim and British rule of over a 1,000 years. The suffering and denials of our people and then the euphoria of getting freedom, though at the cost of the division of the country. I was seven-years-old then and grew up under the belief that it was going to be a country of no sufferings nor of denials. Now 72 years on, my hopes were belied.

Who is responsible for this dismal state of our country? Since we are a democracy we have to blame ourselves because it is we who choose our rulers and the rulers appoint the bureaucracy. Till such time our voters are nationalists, patriotic, wise and honest, we will not get wise and honest Ministers and Bureaucrats.

Having said this, let me come to the Nanjaraja Bahadur Choultry. Readers of newspapers in Mysuru know its history and its iconic presence in the heart of the city on a 10-acre land with roads on all four sides and another iconic hotel, built by that legendary Sir M. Visvesvaraya, Metropole Hotel, across the JLB Road.

As I know, this Choultry has been a cash-cow for whichever Committee managed it or whoever was its Manager. I used to get reports and complaints of corruption, misuse of the premises and arbitrary leasing of the open land for pittance of ground rent. Though its management was under the Mysuru City Corporation (MCC) with the Deputy Commissioner (DC) having administrative powers, there was much scope for looting the property in various ways. In fact, at the request  of some well-meaning people who loved this city, I had spoken to two DCs about the issues connected with this Choultry with some relief.

I was amused to read that the major donor for this Choultry was a royalty, Nanjaraja Bahadur, a son from the 10th wife of Krishnaraja Wadiyar III. Built in 1890, the cost of the building when completed was Rs. 63,547 of which Nanjaraja Bahadur gave Rs. 50,000. Except for the name and an old photograph which I had seen hung inside (I wonder if it is still there) there was no statue or bust of the donor.

It is learnt the bust of Nanjaraja Bahadur (see pic. above) was installed in 1992 when Siddaiah was the Deputy Commissioner and late K. Harshakumar Gowda was the MLA.

Now the President of the present Managing Committee C. Krishnappa has decided to take possession of the land leased to Kings Kourt Hotel, facing JLB Road 40 years ago and invite fresh bids. Wonder whatever the status of other lands leased likewise.

This is one land for which there was cut-throat competition from entrepreneurs, businessmen and politicians, so much so Court cases were also filed.

I learn providentially a large part of the land has remained with the Choultry, with the aspirants and mafia unable to grab the land so far. Now I am told our present Chief Minister H.D. Kumaraswamy has promised to give all the vacant land to the Maharani’s College for its expansion, the land being close to the existing college on JLB Road. How wise and environmentally correct this decision is, we do not know. Already there were so many buildings — Vartha Bhavan, Government Employees’ Building, Weigh Bridge, Petrol Bunk, Veterinary Hospital, a garage etc., etc. Earlier, there was a Beggars’ Home also. Therefore, it would be best to turn the land available into a parking area or a Green Park — a lung space in the crowded down-town area. Enough is enough. Once a land is leased or a building comes up on that land, it is  difficult to get it back, more so with so many laws, lawyers and law courts.

What we are witnessing at this Choultry is the manner we manage our public property. Those entrusted with the responsibility of managing and developing such properties use their position into an opportunity to make money or favour friends either by  leasing, selling or renting the property contrary to the interest of the public and wishes of the donors or owners of the property.

Take for example our Mysore University property of Manasagangothri. Where was the need for giving a portion of the land facing Hunsur Road (near Paduvarahalli) for a petrol bunk? We do not know if other private parties are given land likewise.

I remember Mysore Race Club (MRC) Managing Committee members inviting Siddharamaiah, the then Deputy Chief Minister and also the Finance Minister, for a dinner at the Club House to request him to allot the 4.5 acres of land in front of MRC Club House (where Mall of Mysore and Radisson Blu Plaza 5-Star Hotel now stands) for the MRC for its expansion. Mercifully, Siddharamaiah did not bother.

Later, many politicians and land mafia ventured to get it by means fair and foul from MUDA which had taken possession of the land after vacating the illegal and legal occupants.

Fortunately for the good of our city, the then MUDA Commissioner managed to invite international bids and was able to sell it for about Rs. 22 crore. Incidentally, this one sale led to the sky-rocketing of real estate price in and around Mysuru city. I am also a beneficiary of this sudden rise in real estate price.

Prof. M. Madaiah, Vice- Chancellor, Mysore University (1991-1997), once told me that he was surprised to find many real estate properties of the University being lost or encroached upon by squatters. Apparently the University Estate Officer, if there is one, did not do his job well in protecting the properties.

Prof. Madaiah specially mentioned of two buildings in Chickpet, Bengaluru, donated to the University by philanthropists which were illegally occupied and how he managed to get those properties back. But, one wonders if they are still with the University. Present VC Prof. Hemantha Kumar may do well to check.

Recently Chief Minister H.D. Kumaraswamy had laid the foundation for some civil works on a 22-acre property of Mysore University at the foot of Chamundi Hill on the main road near the Arch Gate (close to SDM-Institute for Management Development). This land too was brought under a Court case by the land sharks and it was Prof. Madaiah who got it registered in the name of the University. This land was given to the University by the All India Institute of Speech and Hearing (AIISH) in exchange for the land it had taken from the University at Manasagangothri. This 22-acre land was sanctioned by the Government to AIISH long back but AIISH decided to exchange it. Who knows, but for Prof. Madaiah’s initiative the mafia would have grabbed the land.

Now take the case of Metropole Hotel. It was run by the London Ritz Group on international standards for many decades. Then one day many covetous eyes of our politician-businessmen fell on this Hotel. The Government refused to renew the lease. Thereafter, the matter went to Court and finally the Government won. But the Hotel remained closed for many years, the building became dilapidated, hundreds of workers lost their jobs. Government too lost crores of rupees by way of tax. But nobody seemed to bother. Apparently, men in power have ceased to be nationalists and patriots. Finally the PWD restored the building and it was given to a reputed hotel group Royal Orchid owned by Balji. Thank God.

It was the same fate for the Brindavan Garden Hotel at KRS. It was also revived and given to Royal Orchid Group.

If we love our country, we must take responsibility to protect and develop public properties. Otherwise we would be using our motherland for personal  exploitation which is detrimental  to our country’s economic progress and development. Definitely, an anti-national conduct. Jai Hind.