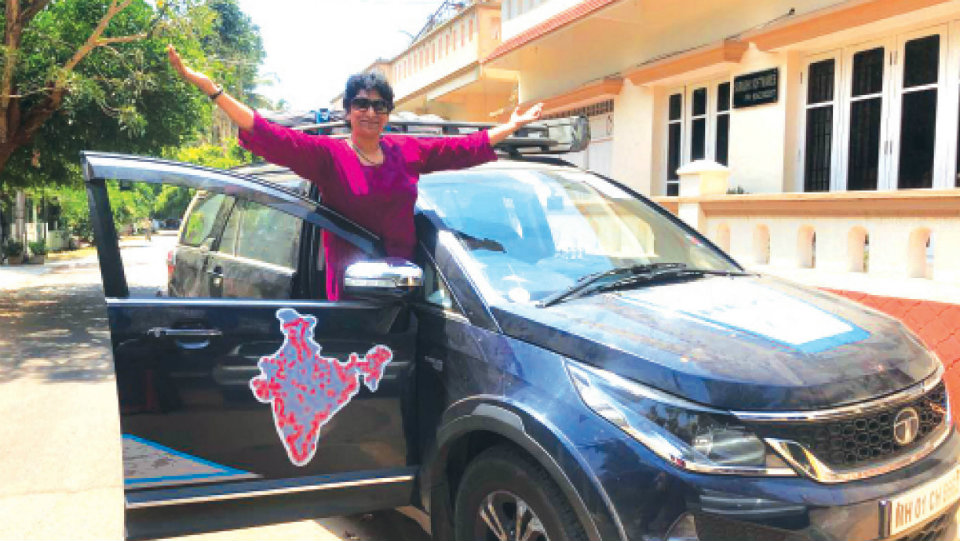 On a Gandhian Yatra…

Asked how the journey began, she said, “I had turned 50 and my son had reached the age of 25 and my husband is busy in his own work. I am a pilot, mountaineer, paratrooper, photographer, poet and with all this I want to explore things on my own. Hence, I wanted to make this solo trip. What better way than the Clean India trail during Mahatma Gandhi’s 150th birth anniversary. It is a Gandhian Yatra to promote Clean India, Safe India.”

It is an Incredible India no doubt. But you need an Incredible Woman to do the Incredible Journey and this is the story trail of that woman who has done nearly 46,000 kilometres so far ‘Solo.’

Meet Sangeetha Sridhar, who arrived in the city this morning from Hasanur in Tamil Nadu, fresh as a daisy after driving non-stop for 210 days and took just ten minutes to freshen up in her industrialist-friend Aruna Devi’s house in Gokulam and chatted with Star of Mysore non-stop for almost two hours about her experiences which leaves one spell-bound.

Her mission is clear and it has three phases: Phase 1 – Solo Drive — Endurance of a single woman on a nation-wide drive on the Bharath Mala National Roadways Infrastructure Corridor Route. Phase 2 – Clean India Audit trails as a citizen initiative — Encourage women of India to undertake their own journey of trails within their State/city/village Corporation/Taluk and follow-up on the sanitation facilities.

And Phase 3 – Periodically undertake new India trails in focused areas and showcase successful champions of innovation under the ‘Clean India’ and ‘Make in India’ initiatives ensuring their profitability and expansion through network communities.

In these 210 days she has crossed top 10 Himalayan Mountain Passes and visited 25 international borders of India. “I wanted to prove through this solo drive that women are safe in India and not what India is portrayed outside after the Nirbhaya rape and many other such incidents. In this endeavour of mine I have been backed by the Army throughout my journey,” she said.

She started her journey on Aug.12, 2018 (as it marks the birth anniversary of Sheik Zayed, Father of United Arab Emirates, as she was the Ex-E-Government Advisor from the Gulf, who divides her time between Abu Dhabi and Coimbatore) from the Gateway of India, Mumbai, where the last British soldier left India in 1948.

She was forced to take a break for about three weeks as her father-in-law passed away and she had to participate in the religious ceremonies. But she was back on the road from Lucknow where she had parked her car. “The trail for me is like Gandhiji’s Satyagraha march from Dandi to my own Swachhagraha march campaigning on cleanliness,” she said.

Sangeetha is all praise for Mysuru. “It is not just a city. It is an identity. Made in Mysuru is really something very special, be it the silk sarees, sandal soap, the Mysuru Dosa. It is a city that is so well planned with broad roads that one can immediately make out the touch of the visionary rulers. Just ask for a direction and in spite of a person being busy, he takes time to direct you clearly to your destination. That is Mysuru hospitality for you, rarely seen anywhere and that is why foreigners come here to learn yoga and seek spirituality,” she gushes.

Her journey has taken her not only on the cuisine trail as she makes it a point to get the spices and other materials of each and every State that is unique but also the sartorial experience. “I make it a point to wear the dresses of the region as soon as I reach that place. The sarees of each place is unique and they are not very expensive. That is what I want to project,” she said.

Asked how she manages to sleep in the car after reaching a destination that as she drives solo, she said, “There is a very thin line between the thinking of a Gandhian principle and labelling one a prostitute. I sleep near a Toll Gate or Police Station. There are social groups like the Rotary who are always there to help me out. For instance, my friend Aruna Devi, who herself is a Rotarian, here has been tracking my journey right from the time I started.”

Asked about the toilet facilities in the country after the Swachh Bharat campaign started, Sangeetha said, “I wanted to audit 100 toilets for which an App has been developed called Map My India. But I have audited 225 toilets. You will be surprised to know that there are toilet facilities in most of the villages across India but one only has to take time to find out. I have never sat under a bush so far to ease myself.”

Asked what her diet is, she said, “I can stay hungry for long hours as I have practised what is called ‘Autophagy.’ I never drink mineral water. I carry three empty bottles — metal, plastic and thermos — to fill water. Luckily I have never fallen ill. Only once in Leh where I was stranded and my vehicle froze, I took Diamox tablets after the Army came to my rescue.”In her sojourn of the nation where she is on the move sometimes for 12 to 15 hours, she has truly understood what is ‘Make in India’ when she visited Jamshedpur where Army trucks are made, Bhilai and Bokaro where there are steel rail plants. “The most exhilarating experience was at the Kaman Aman Setu where the Pakistan and Indian trucks cross and in a barter system exchange goods,” she said.

Asked what her plan for the future was, Sangeetha said, “My journey culminates in the same point at Gateway of India where I started, next month (mid-April) and I have to return the vehicle to the Tata company. First I have to file the UN Report on toilets, that is current rate of sanitation in India under SDG-6 (Sanitation Development Goal). The next 25 years my plan is to focus on cleanliness, women safety and women and governance.” Sangeetha, the  gritty woman, with a cheerful countenance and lots of chutzpah, gets into her car and drives away with that wild wave signifying that woman is shakti akin to Goddess Chamundeshwari, the reigning deity of Mysuru.