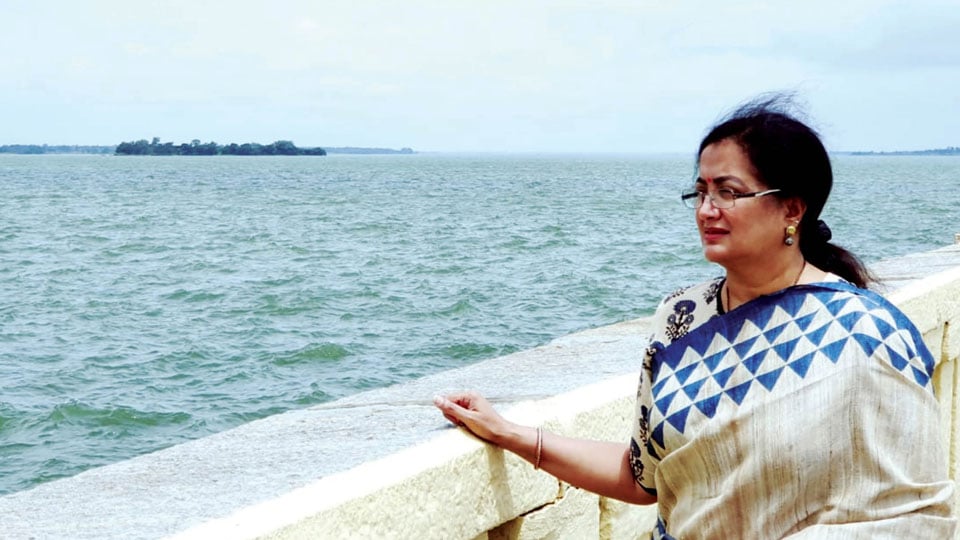 I am here to protect Krishna Raja Sagar (KRS) Dam, the lifeline of several districts in the State. As promised to Mandya voters during my election campaign, I will not allow illegal quarrying that will endanger the century-old Dam which has been constructed by rulers of Mysore.” This is what Sumalatha Ambarish, Lok Sabha Member from Mandya and wife of noted actor-cum-politician, late M.H. Ambarish, told Star of Mysore. Recently in the Lok Sabha, she raised the issue of illegal mining and stone quarrying in the vicinity of KRS. In a free-wheeling chat with Star of Mysore, the MP shared her experience in the Lok Sabha, about blueprint for Mandya development, pursuing film career and marriage of her son. Excerpts. —Ed

Star of Mysore (SOM): How has been your journey as Mandya MP since last two years?

Sumalatha: It has been a learning phase of life and I have learnt a lot. Definitely, I have to face a lot of challenges. To overcome this, I had to become stronger and be more patient.

SOM: I think you had absolutely no idea how Lok Sabha (LS) functions. How was your experience to be in the temple of democracy?

Sumalatha: I had little idea about how the Lok Sabha functions because Ambarish was a three-time MP and I have been a part of his journey, though not a big part. One has to be open to learn new things. It is very interesting. You will get to hear brilliant speeches and that has been an interesting sight to watch. When I get an opportunity to speak, what a privilege it is to be able to speak in a House where 543 MPs are elected among 130 crore people and the whole of India might be watching you. That’s a great feeling.

SOM: You entered LS with lots of expectations. Are you optimistic of getting them realised?

Sumalatha: I think it’s not expectations; I would say if I had a lot of hopes I could do a lot for my Constituency. Yes, of course, one learns that there are a lot of limitations as an MP. Your scope is not wide as others may perceive it to be. Some of your questions, which you asked are actually not under the purview of what an MP is within his or her power to do. But people still think or expect that just because you’ve been elected as an MP you can pull off everything. It doesn’t work like that as there’s a State Government which has the whole machinery behind it, and of course, there’s the Central Government which will make laws.

Our job as an MP is limited to representing and highlighting the problems of various Constituencies and not just limited to our Constituency. As far as my Constituency is concerned, I would say, I have been successful in highlighting farmers problems, water problems and mining issues. So, yes, there’s been a certain amount of success and there’s still a lot to be done.

SOM: There is a popular perception that Karnataka MPs do not speak. Is it due to lack of opportunity or afraid of talking against their Government?

Sumalatha: I think people do not understand the way the Lok Sabha functions. It is not easy to get an opportunity (to speak). Sometimes, your questions or your Zero Hour debate participation is very, very dependent on a kind of lottery system, a computerised system. If your name gets picked up then you get an opportunity to speak. You can’t just stand up and start speaking but you have to keep trying. So I don’t know about others why they’re not speaking but definitely I would say this is one of the main reasons. I’m lucky I got a few opportunities to speak.

SOM: Ten-lane Express Highway work is going on between Mysuru and Bengaluru. Is it going to change the fortune of Mandya district?

Sumalatha: The ten-lane Express Highway is a prestigious project. There might be certain benefits which come in the way for Mandya because the properties around any Highway projects or any road improvements always get appreciated. Other than that I think it’s not going to change the fortune of Mandya overnight but will definitely improve Mandya’s  prospects as 58-km stretch of the project is passing through Mandya. Farmers have given up their lands for this project which is mainly for the commuters between Bengaluru and Mysuru. So I think it will benefit Mysuru more than Mandya as far as I see. But I’m hopeful that even Mandya will get to see improvements because of this project.

SOM: The perennial problem of Mandya has been non-equal distribution of water for irrigation. What are your plans to address it?

Sumalatha: I think I’ve already addressed this question as to what comes under a MP’s scope. When you have questions like this you should be really putting these questions to Water Resources Department of the State Government. Our role would be to represent and present these problems to authorities concerned. And I have been doing that non-stop.

SOM: Sugar Mills of Mandya are sick. How are you going to revive them?

Sumalatha: There are only two sugar factories in Mandya district and not more like some districts in Karnataka. One is Pandavapura sugar factory and the other is MySugar. From the day I assumed office, this is what my fight mainly has been and this is what I had promised farmers during my campaign. We have succeeded in opening of Pandavapura sugar factory. As far as MySugar is concerned, it is an ongoing battle and I have not given up. I’m constantly in touch with the CM and the Minister concerned. Now, I think there’s been a change of Sugar Minister so again I have to renew my fight. There have been local issues and some people are trying to put obstacles in the way. But I think when your path is right, what you’re going to do is for the benefit of the common man and the farmers of my district, then nothing deters me.

SOM: People wish their MP should have a house in Mandya and stay there. Are you thinking in this direction?

Sumalatha: Yes, I have taken a house for rent in Mandya, and I do plan to make my own house. Let’s see. I’ve been looking for a land and space to build my own house. Hopefully I’ll do it soon. But meanwhile I’ve been in Mandya, touring all taluks. So, it doesn’t matter where I’m actually staying as long as I’m in touch with my people. For example, if people from K.R. Nagar have to meet me it’s not possible for them to come all the way to Mandya. I think it is better to go to the people, listen to their problems and try to be there for them as much as possible. That’s what I’m doing.

SOM: Already, you have hogged limelight by highlighting problems of illegal mining in Mandya district. Are you not scared of local mafia?

Sumalatha:  I have been highlighting the problems of illegal mining in Mandya because that’s another promise that I had made to the people. I think my fight shall go on. I’m not going to be scared of anybody because I’m fighting corruption here, fighting illegal activities and  fighting for the safety of KRS dam which is not just for Mandya. People should understand that KRS has been supporting many districts by providing water for drinking and irrigation.

Illegal mining or blasting within the vicinity of KRS can lead to a disaster of huge proportions. My fight shall go on since my main intention is to fight this illegal mining and also prevent people from getting away without paying a royalty and causing hundreds of crores of loss to the State exchequer. This needs to be curbed because we need development money for the district. In this challenging time of pandemic, MP Local Area Development Funds have been suspended for two years. Hence we depend on the District Mining Fund. So I’m going to fight for that and see to it that the money comes into the State Treasury.

We have so many Government School buildings falling apart. We need funds to upgrade Schools and many roads which are in bad shape. From where will we get money if everybody is looting the Government through corrupt practices?

SOM: When are you getting your son Abhishek married?

Sumalatha: Well, my son is just one film old and he’s started his next movie. I think he wants to make sure that at least for the next two years he is working hard and getting established in the movie industry first. I’m not going to hunt for a bride, I think he’s quite capable of finding the right girl for himself. I’ll be there to support him always.

SOM: After becoming MP, you had acted in a movie. Are you accepting new offers?

Sumalatha:  I’ve not acted in any movie after becoming MP. Whichever have been released were the one’s I had worked before I became MP (more than two years ago).  But, if there’s any interesting offer worth my time and doesn’t come in the way of my duty as an MP, I will certainly consider it.

SOM: Your plans to make Ambi’s name immortal in Mandya?

Sumalatha: I don’t think I need to make him immortal as he’s already immortal. His name itself is Amarnath. ‘Amara’ means immortal. His name and memory are etched permanently in the minds of the mass. All I have to do is, uphold that name and continue in that path.