Home » Sports » Impairment has no impact on performance in sports 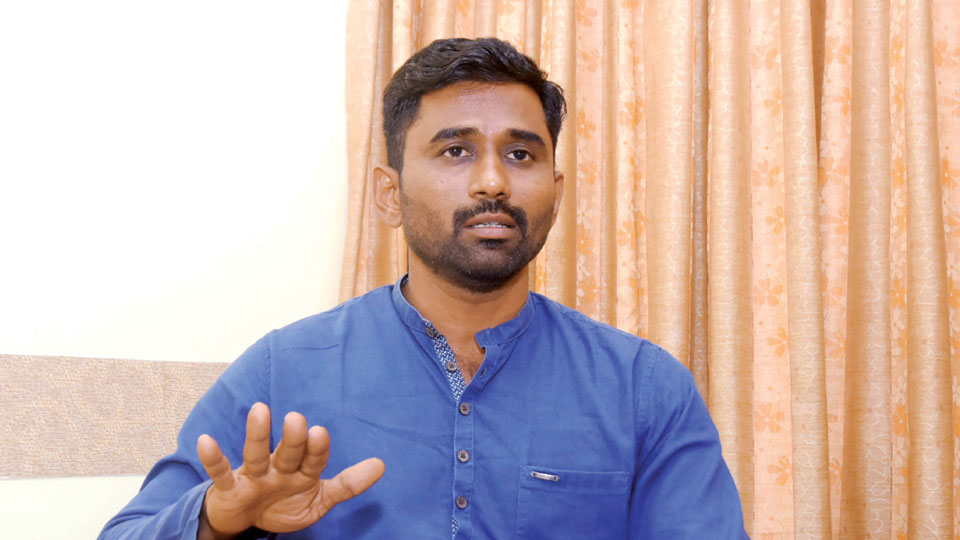 Impairment has no impact on performance in sports

Para Athlete R.T. Prasanna Kumar recalls the testing times he faced when he took up sports

There are people who are amazing athletes and who have everything going for them. And there are athletes who succeed even with all of the odds stacked against them.

One such athlete is R.T. Prasanna Kumar from Chitradurga, who is in Mysuru to be a part of ‘Baandavya 2022-23’ a Specially Abled Children and Youth Sports Meet organised by Rotary Mysore Midtown at Oval Grounds, University of Mysore.

Speaking to Star of Mysore on his arrival in city last evening, Prasanna Kumar said, “There was a time when physically challenged people were looked down upon and there was no opportunity for them to display their talent and sporting capability though they were as qualified and as capable as other sports personalities. Now times have changed. With grit and determination, challenged sports persons are hogging the limelight.”

With limb deficiency as the result of the effects of polio, Prasanna Kumar took up Para Athletics (Javelin throw) in 1999 during his time at college, primarily to show society that impaired athletes can also achieve success.

He is a native of Kondlahally in Chitradurga district and is currently working as an Assistant Master at Government Junior College Molakalmuru, Chitradurga. A National Record Holder, Prasanna Kumar has played three Asian Para Games and won 2 Silver Medals; Represented India in three World Championships and is an IWAS World Games Gold Medallist and an Asian Championship Gold Medallist.

Prasanna Kumar was selected for Paralympics 2017 in London but was denied all facilities including leave to practise or attend the professional coaching. “From India, 33 sports persons were selected and I was the lone athlete selected from Karnataka. Yet, I was denied basic encouragement. In 2016 also I was selected for Paralympics at Rio and my superiors denied me leave with pay to train and even to go to Rio,” he recalled.

“All my appeals to the Commissioner, Education Department and Chief Secretary, Government of Karnataka went unheeded. Finally, through a friend, I met and appealed to Malleswaram MLA Dr. C.N. Ashwathnarayan, who raised my plight in the Assembly session. The then Sports Minister Pramod Madhwaraj then wrote to the officials stating that my case was a special one and hence leave with salary has to be sanctioned,” he said.

Recalling another incident, Prasanna Kumar said that 20 years back when he wanted to participate in Para Games, he was shunned by his villagers. “I was called a lunatic. But my family supported me. When Rs. 65,000 was needed to participate in Asian Games, my friend Somasundar boosted my confidence and fellow villager Revanna helped financially,” he said.

“My father is my greatest inspiration. He is a Kabaddi player but I did not have any interest in Kabaddi. During his leisure, he tended to cows and to prevent them from going far away through the fields, he used to hurl stones. I followed the practice and was able to beat my father as my stones would land at great distance. Somehow, throwing objects to a distance caught my attention and I took up Javelin throw,” he recalled.

“Para athletes have been able to demonstrate that the impairment has no impact on the performance of the sport. Such athletes have many intellectual skills, cognitive skills and the skills that everyone needs if you are going to compete at a high level. What matters the most is the encouragement accorded to such athletes,” he said.

On his future aspirations, Prasanna Kumar said that he will make his daughter shine in the Javelin throw. “Due to a back injury, doctors have advised me not to lift weights. I am staying away from sports unwillingly. But my 12-year-old daughter has shown keen interest in Javelin throw and I am coaching her to compete in national level. I am also willing to coach the children of fellow villagers,” he added.