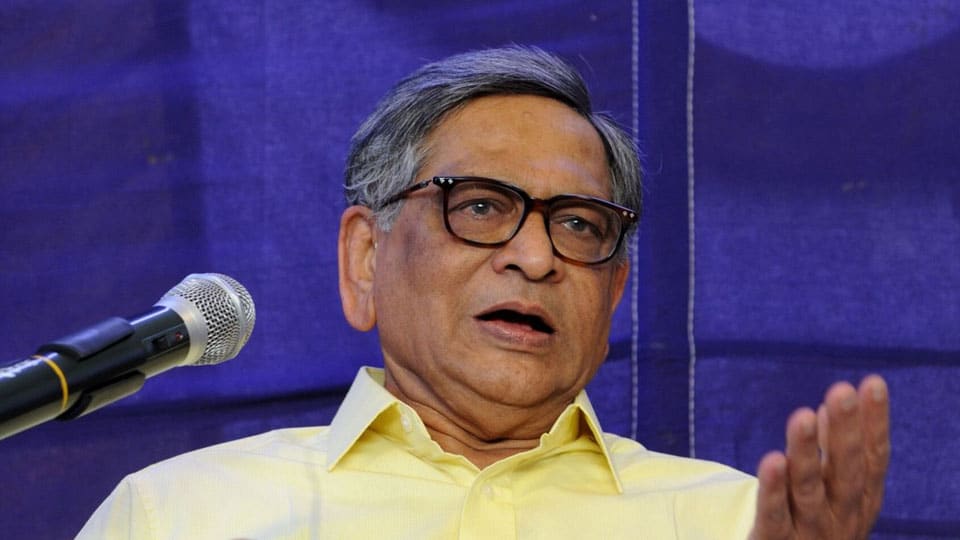 In Reverse Gear…: S.M. Krishna to return to Congress?

Bengaluru:  Miffed over being neglected in the BJP, former Chief Minister S.M. Krishna is likely to return to his parent party Congress soon, according to sources.

Upset over being ignored by Chief Minister Siddharamaiah in the Congress, Krishna had joined the BJP last year in New Delhi in the presence of Prime Minister Narendra Modi and BJP National President Amit Shah.

But in the BJP too, Krishna felt neglected, as the party was cool to his claim of a ticket for his daughter Shambhavi to contest from his (Krishna’s) hometown Maddur or Rajarajeshwari Nagar in Bengaluru.

Apparently miffed over being ignored in the party, Krishna is said to have decided to quit the BJP and rejoin his parent party Congress with which he was associated with for nearly five decades. AICC President Rahul Gandhi is said to have given nod for the return of the veteran leader to the Congress fold, the sources added.

Congress leader quits party in the morning, goes to BJP, comes back by evening!

Sundara Devinagara, Secretary of Panemangaluru Block Congress in Bantwal constituency in Dakshina Kannada District is the one who played a ‘swing’ exercise. He had quit Congress to join BJP in the morning on Saturday. BJP leader U. Rajesh Naik, who will be contesting against Minister B. Ramanath Rai from Bantwal, received Sundara by handing over a party flag at a function in B.C. Road.

However, a few hours after Sundara joining BJP, another programme was organised by the Congress in Mani to bring him back to the party fold. Hence, Sundara, after apparently being cajoled by party leaders, returned to Congress by evening.