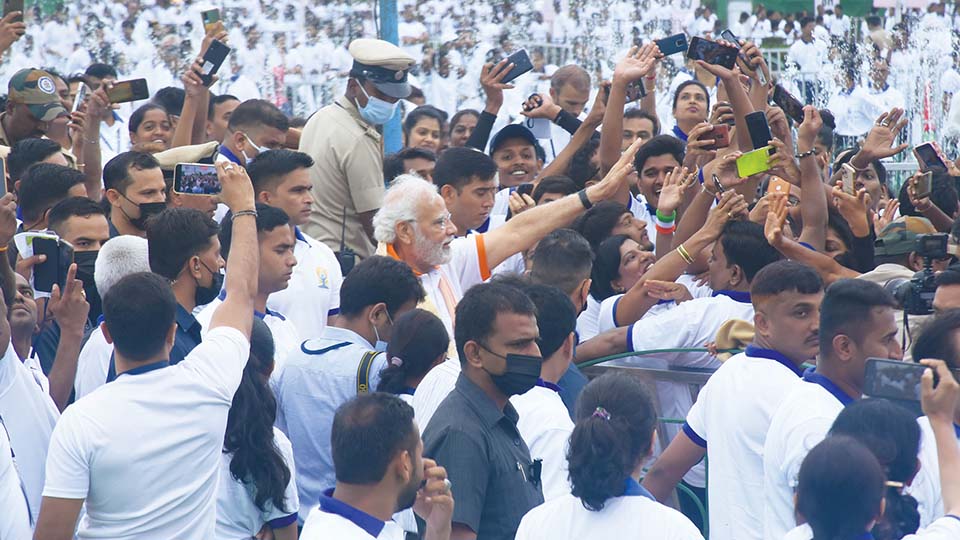 Mysuru: Preparations for Prime Minister Narendra Modi’s visit began 20 days in advance with the upgradation of infrastructure, beautification, greening and of course, the cleaning of the perennially-clogged drains and rectifying pothole-ridden roads all along the PM’s route.

But the tense part was his visit per se as elaborate arrangements and backup plans had to be made to ensure that there is no lapse. Though the PM’s Mysuru visit was only for about 18 hours from his arrival in an IAF helicopter at the Oval Grounds to his departure at about 10.30 am from the Mysore Airport, the Mysuru District Administration and the Police were on their toes to make it an incident-free visit.

Though the inner layers of the PM’s security lie with the Special Protection Group (SPG) and the commandos from the National Security Guards (NSG), the outer security layer had to be provided by the State Police along with taking the decisions on routes, entry and exit points, logistics, personnel and also contingency plans.

The PM’s itinerary had eight places including Chamundi Hill and the Suttur Mutt. Along with the PM, his entourage of security personnel, and teams that came to Mysuru before the PM’s actual visit had to be taken care of including their food and accommodation needs.

This apart, security had to be ensured at the events that were held in open field locations and also on the routes where the PM’s cavalcade would travel in the night on June 20 from Maharaja College to Suttur Mutt, Suttur Mutt to the Chamundi Hill and from Chamundi Hill to Hotel Radisson Blu Plaza.

The next day the itinerary was from the hotel to Mysore Palace, Exhibition Grounds, back to the Palace for breakfast and then to  Mysore Airport where the PM’s special IAF plane was waiting.

The elaborate arrangements made by the District authorities and the Police at all the venues and roads earned the accolades from Chief Minister Basavaraj Bommai. The CM also complimented the people of Mysuru, members of various associations and NGOs for tirelessly working to make the PM’s visit a smooth and successful affair.

Director-General and Inspector General of Police (DG-IGP) Praveen Sood complimented the senior and junior Police officers and the constabulary for the feat who ensured that there were no lapses in any manner. “The credit must go to them,” Praveen Sood told Star of Mysore.

Mysuru Deputy Commissioner (DC) Dr. Bagadi Gautham who led the overall preparations as the head of the district said that it was a big challenge to ensure that the PM’s visit passed peacefully. “Ensuring security at eight places simultaneously is not an easy task. Every one of us has contributed. Many roads have got a new look and even the decorations and illuminations were impressive and Mysuru wore a bridal look. The good coordination between the elected representatives and the officers has resulted in success,” he said.

City Police Commissioner Dr. Chandragupta attributed the success of the VVIP visit to teamwork, better planning and implementation. “We have achieved this in coordination with the SPG and the suggestions given by the ADGP and DG-IGP were implemented. In addition to the 1,500 personnel from the Mysuru Police, we had summoned forces from other districts too to ensure that there are no lapses,” he said.

Civil, CAR, Wireless, Special Branch, Intelligence Bureau, State Intelligence, Anti Naxal Force, KSRP and additional forces kept a hawk-eye vigil at all 8 places and along the route of Suttur Mutt and Chamundi Hill. One team was fully dedicated to monitoring Chamundi Hill with the help of night-vision drones, he added.