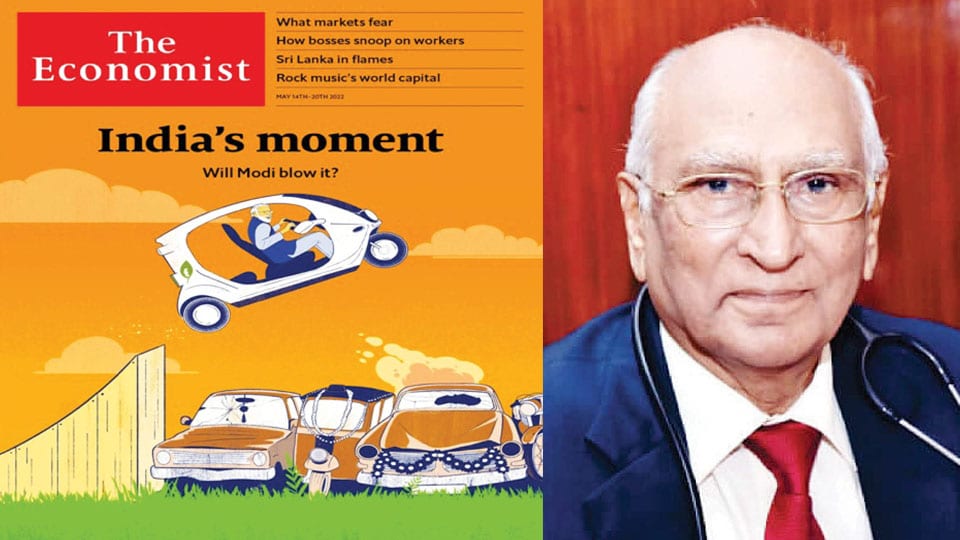 The Economist is a prestigious international weekly covering the global economy and political scene, and is well-known for its critical and balanced views. Often it is skeptical of India, Indian economy and Indian democracy. But one of the issues published in May was highly appreciative of India. Some of the salient features it mentions are as follows:

India is expected to be the fastest growing large economy of the world. India has rolled out a national “tech stack”, which is a set of electronic initiatives which links ordinary Indians to electronic identity, payments, tax systems and bank accounts, which is helping to slowly reduce the cash economy.

The direct digital welfare measures has helped the Government to distribute 26 billion dollars (about two lakh crore rupees) in subsidy schemes and India has become a hi-tech welfare society. It is having the world’s third biggest startup enterprises next only to the US and China and more than even Japan.

While there is a shortage of software engineers in the rest of the world, India is producing half a million of them annually. As western industries try to reduce their reliance on China, India is becoming an attractive alternate production centre.

The transformation of the Indian economy has an epic quality. A vast national market is being created and a brash new consumer class is proliferating. Indian tycoons are investing heavily and creating business empires like the 19th century Rockefellers and Carnegies of the USA. The big top four industrial giants — Adani Group, Ambani of Reliance, the Tatas and JSW — alone are planning to invest 250 billion dollars (nearly twenty lakh crore rupees) in the next five to eight years. Bengaluru’s low-key tech culture is creating a new generation of business enterprises. The IMF (International Monetary Fund) predicts that by the mid-2030s, India will be the world’s third largest economy, and  will contribute more to global GDP each year than Britain, Germany and    Japan combined.

The financial system has become more resilient. Banks’ bad debts have been cleaned up. Increasing number of domestic investors helps to stabilise the stock markets even when foreign investors flee.

The bankruptcy code has helped to clean up the financial system. Formalisation of the economy gives the Government more tax raising opportunities.  The business and public perception of the Government is one of consistency and less corruption. Though the present Indian GDP is only one sixth of China’s, Indian tech and business services exports are only just lagging behind China.

The magazine says that India has been a robust democracy with its independent courts and a noisy press. But it red flags that over the years the secular notions enshrined in the Constitution have weakened.

Modi wants to restore Indian greatness. Even if India manages a growth rate of little more than six percent, it will be the world’s third biggest economy by mid-2030s.

A large English speaking population and a democratic political system, if India can keep it,  may allow Indian technology and cultural exports to wield more global influence than did China at similar income levels. Given its size and potential, India could be the world’s next economic motor. To quote                                            The Economist: “Indian growth will be world changing. But you should neither hope for, nor fear, reprise of the Chinese experience.”

Note: The economic destiny of our country seems to have changed for the better after 2014 when BJP came to power, fortunately with Narendra Modi as the Prime Minister. But for his extraordinary leadership, coupled with his skills in oratory, ability to connect with people as well as his vision for India’s future, I do not think The Economist would have found it important to make a cover story like it has done.

In matters that concern the country, Modi does not make any compromise — whether it is security, integrity or economy. —KBG