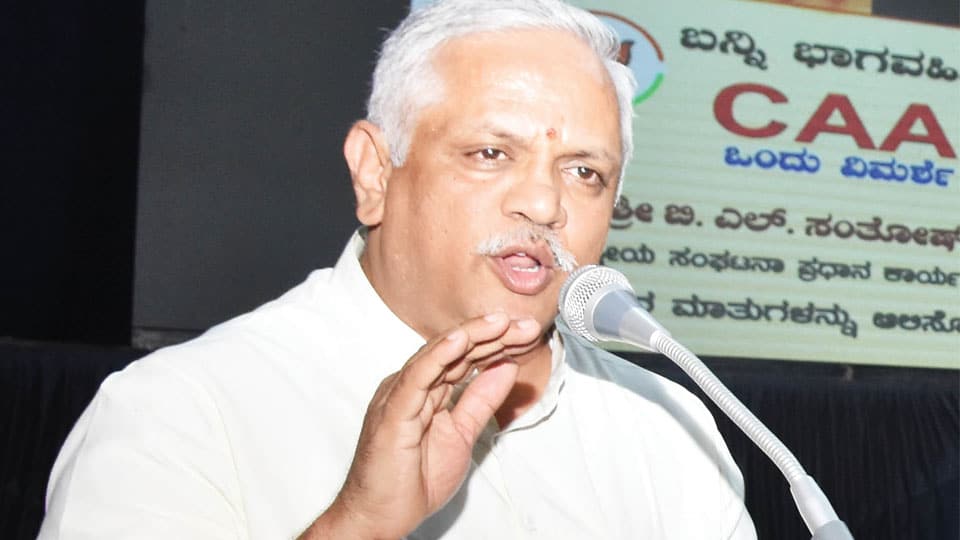 Mysore/Mysuru: BJP National Organising General Secretary Bommarabettu Laxmijanardhana Santhosh, better known as B.L. Santhosh has dispelled fears about the Citizenship Amendment Act (CAA) Act saying that no one, including the BJP, can snatch away the citizenship of minorities, which is guaranteed under the Constitution.

Addressing a public meeting on ‘CAA: An analysis’, organised by Mysuru City and District BJP at Mysore Medical College Platinum Jubilee Hall, on J.K. Grounds in city last evening, Santhosh hit out at Left and other Opposition parties and some intellectuals for carrying out a malicious and mischievous campaign against Prime Minister Narendra Modi-led Government and the CAA. “Muslims need not worry as there will be absolutely no infringement on their rights or citizenship,” he clarified.

“The protests are a conspiracy of the Opposition and vested interests to defame the PM and India. Misinformation spreads easily. But the truth will prevail. The non-BJP Governments kept several problems hanging since 70 years due to political reasons and to strengthen their respective vote-banks. Now, the Opposition parties blame the BJP for their follies,” he said.

Nothing to do with Muslims

“The CAA is not meant for people born and brought up in India and is an Act bestowing citizenship and dignity on the persecuted religious minorities from Pakistan, Afghanistan and Bangladesh. It is a Constitutional, cultural and historical obligation and has nothing to do with the Indian Muslims or other minority groups,’’ he added.

“The protests and the narratives against the CAA is the biggest disinformation campaign being floated by the Opposition with the help of Leftists and so-called intellectuals. They have built a strong network and this is reflected in the serial protests in cities and the editorials in the media. But the BJP is determined to fight it out and is confident of riding out the storm,” he said.

“We are not worried about the protests. Only a section of Muslims, intellectuals and ultra-Leftists have taken to the streets spreading fear that people’s Aadhaar card and other benefits will be withdrawn. We are speaking to Muslim clerics and people from the community across the country to clear the air,” he added.

“BJP President J.P. Nadda has challenged Congress leader Rahul Gandhi to speak 10 sentences on the CAA. But there is no reply. Mainstream Congress leaders are keeping away from the protests. They are limiting themselves to addressing media conferences and tweeting. They know that the issue will boomerang,” he opined.

Referring to the 1950 pact signed by the Indian and Pakistani Governments to protect the interests of minorities in both countries and to ensure dignity of life, employment and property, Santhosh said the BJP Government is only fulfilling its constitutional obligations.

“The Hindu population which was 23 percent in 1947 is now reduced to just 3.7 percent in Pakistan over the decades after partition. As per a rough estimate, 68 percent of CAA beneficiaries would be the people of SC and ST communities including Valmiki, Bhovis and Megawali. But the BJP is being projected as anti-Dalit, anti-poor and anti-Muslim by vested interests. Truth will prevail and people will understand who is working to uphold the Constitution and law. The resolution passed against the CAA in a few State Assemblies has no value. It is a one-day joy for Kerala and Punjab,” he said.

‘Border disputes and Cauvery row will be resolved’

READ ALSO  CM Yediyurappa’s 77th birthday on Feb. 27 to be a ‘non-partisan’ event

“These disputes are posing hurdles in the State and nation’s progress path will be solved before the next General Elections,” he said.

“People elect Governments to solve their problems. The mandate of the people is not just to enjoy power. Whenever and wherever the BJP was given a mandate, the party has solved long-pending problems,” B.L. Santosh added.

Since the re-election of the BJP Government at the Centre, Prime Minister Narendra Modi, Home Minister Amit Shah and the entire Government machinery are involved in solving various problems that were kept pending and those that are hanging in uncertainty, he added.

“A quadripartite pact was signed recently to permanently settle Bru (Reangs) refugees of Mizoram in Tripura, 644 militants surrendered in Assam recently, another 800 militants will surrender shortly, Kashmir was united with India in the true sense, Triple Talaq was criminalised and steps were taken to end the Ram Mandir dispute. Likewise, other problems will also be solved,” he assured.

Bollywood actors mocked at for their statements

Mocking at the actors for their statements that they did not have relevant documents, Santhosh wondered how it was possible for them to procure passports and visas to travel abroad or procure driving licence without documents, and reiterated that the CAA will not ask for any documents from Indian citizens as it meant to bestow citizenship upon persecuted religious minorities.

Deepika Padukone also came under flak for her support to the JNU strike. “Her concern would have been more meaningful if she had visited the parents of Nirbhaya who was sexually assaulted and murdered in Delhi in 2012. Why this selective outrage,” he questioned.