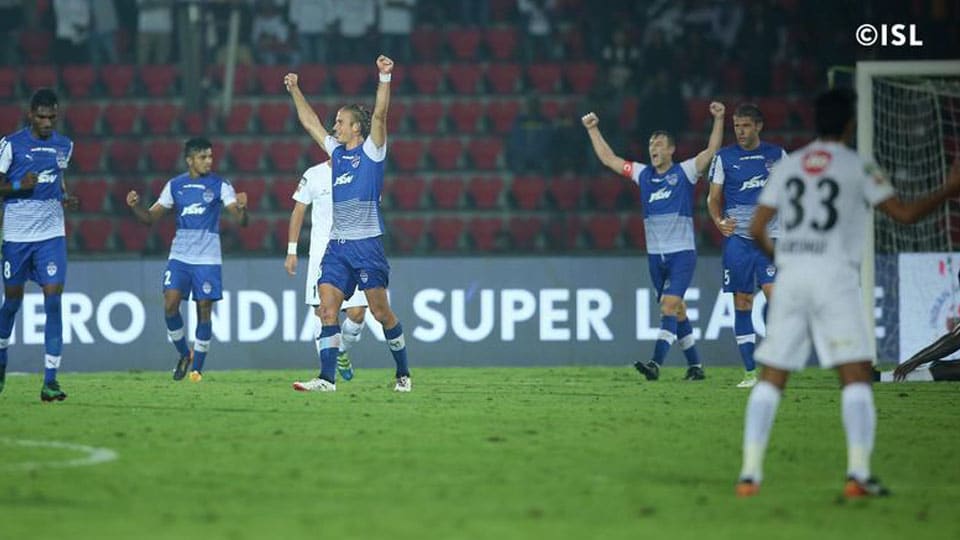 Bengaluru FC beat NorthEast United FC 1-0 in Hero Indian Super League (ISL) 2017-18 at the Indira Gandhi Athletic Stadium in Guwahati yesterday. Venezuelan striker Miku netted the winner for the Blues early in the second half as Bengaluru climbed back to the top of the table.

The match started with plenty of free-flowing football from both sides as the teams took turns to carry forward attacks. Bengaluru got the first chance of the match in the 14th minute as Miku was fed a ball from Udanta Singh on the right, but with the defenders closing in, Miku’s hasty toe-poke trickled inches wide off the target.

The Blues then upped the ante and kept the lion share of the possession, initiating attacks in abundance. Bengaluru’s captain fashioned his team’s next big chance after Edu Garcia chipped in a ball towards Sunil Chhetri between two defenders, and while their skipper took the ball down well, his shot was straight at Highlanders’ custodian TP Rehenesh.

The hosts got their first shot on target on the half-hour mark when Jose Goncalves ran into the box and let fly, but keeper Lalthuammawia Ralte had no trouble making a straightforward save. Four minutes later, Marcinho went through on goal following a one-two with Adilson Goiano. His chip though was way off target.

The home team now started pressing relentlessly. Six minutes before the half ended, Danilo Lopes was released on the right, and his shot, which was on target, was met with a fingertip save by Ralte. Marcinho then tried to curl in from distance in the 41st minute, but the effort just sailed wide off the mark. That was the last bit of action in the first half as the players went into the break with the scores tied at 0-0.

Bengaluru made sure that there was no dilly-dallying in the second half as they got themselves the opening goal two minutes after the restart. A misspass from Rehenesh was pounced on by Udanta, and he squared it for Miku who took a touch before slotting the ball home.

As the second half dragged on, the ball stayed mostly in midfield as neither team created any significant openings. NorthEast tried their luck from distance a few times, particularly with Marcinho and substitute Lalrindika Ralte, but with little success.

They had a great chance to equalise though when Lopes turned inside the penalty box and got away a clean shot. But, Ralte was in the right place to make the save as the Blues hung on to their lead and went top of the table.