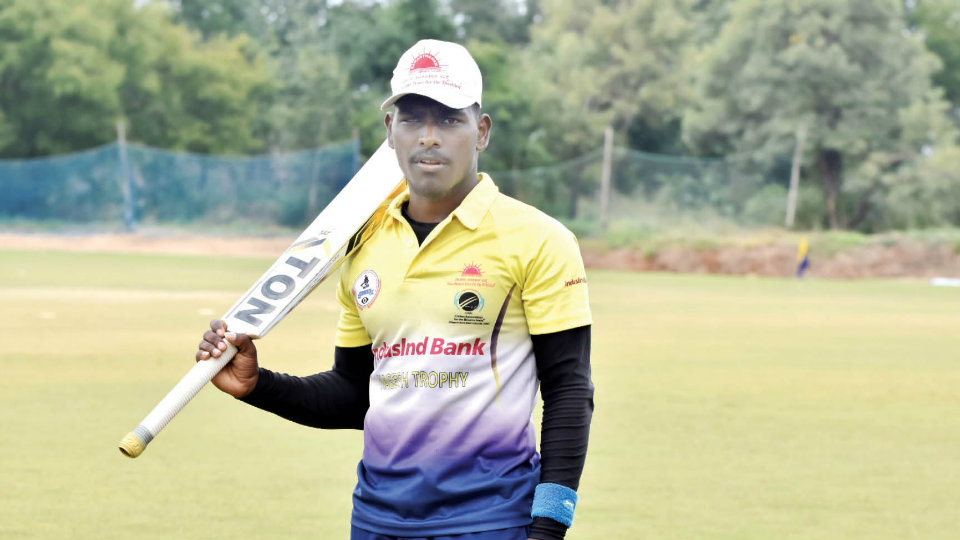 A double century by Karnataka’s skipper Sunil Ramesh (206 n.o., 69b, 46×4), the first batsman to score a double hundred in this Tournament, enabled hosts Karnataka to register a big 158-run win over Goa, and maintain a clean slate in the Group ‘A’ by topping the group and qualified for the quarter-finals, in the Mysuru-leg of the IndusInd Bank Nagesh Trophy 2019 Blind Cricket for Men played at the JSS-SJCE Grounds here yesterday.

The game between Karnataka and Goa was curtailed to be a 17 over affair due to overnight rain and slight drizzle in the morning. The ground staff did a wonderful job to get the game started with just a 30 minute delay.

Karnataka won the toss and opted to bat first. Sunil Ramesh came out with intent and smashed the bowlers all around the park. Everyone in the ground were awed by the array of strokes played from the Karnataka captain as he created history by becoming the first batsman to score a double hundred in the IndusInd Bank Nagesh Trophy.

Karnataka batsmen, spearheaded by skipper Sunil Ramesh, took heavy toll of the Goa bowlers and posted a total of 256/2 in 17 overs. In reply, Goa were reduced to 98/5 in 17 overs, and Karnataka registered a big-158-run win.  The Goa team’s morale was lost during the first innings as they couldn’t recover from bashing dished out to them. The Goan team could never get going as they even failed to get past 100. All the wickets that fell in this game were through run outs.