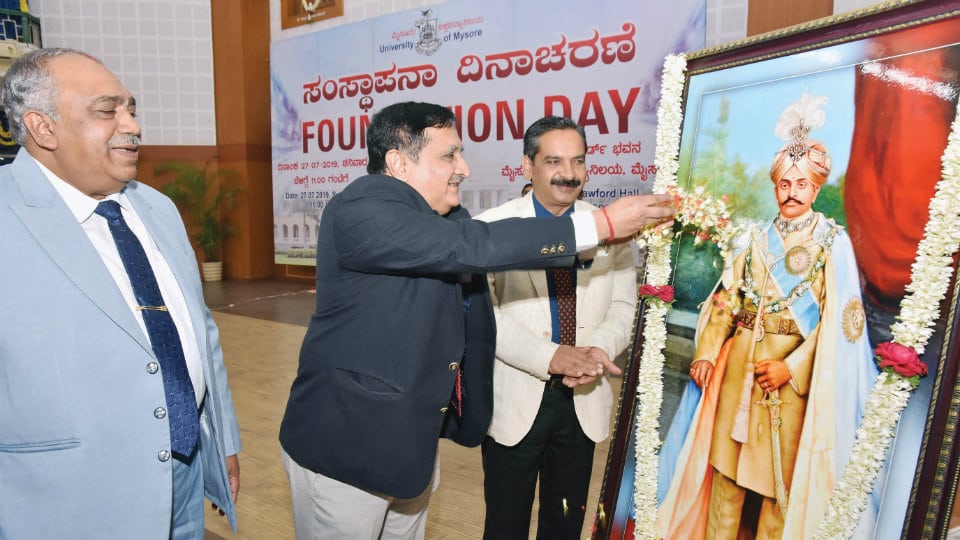 Mysuru:  Painting a grim picture of higher education in the country, Anna University Vice-Chancellor and former Director of IIT Ropar Dr. M.K. Surappa said that the only way to salvage the situation is to strictly insulate the Universities and institutions of higher learning from political and bureaucratic interference.

He was delivering the University of Mysore (UoM) Foundation Day Lecture on the topic “Higher Education and Research in India: Myth and Reality” at Crawford Hall here yesterday and said there is a need for paradigm shift in institutional governance by all stakeholders.

“Just by merely infusing large funds will not transform University into the club of world class standards with respect to research and innovation. This can be done only when there is periodic rigorous reviews,” he said.

“The Centre has introduced the Draft of the National Education Policy but what is to be seen is that the old policy was itself good but has not been properly implemented,” he opined.

The quality of research has to improve.  A country like South Africa has focused on liberal arts; crores of rupees have been invested in IITs and IIMs in this country but they have not risen to the level of expectations.

“All these are leading to less than critical mass of excellence. But if we do not overcome these problems, our higher educational institutions are unlikely to move into league of world class Universities,” he cautioned.

Earlier, UoM Vice-Chancellor Prof. G. Hemantha Kumar in his welcome address said that it was all because of Nalwadi Krishnaraja Wadiyar that Mysore University was established in 1916 and now it is a 103-year-old University. The University this year has been ranked 21st among 75 State Universities in the country and it is at the top among the eight Universities in the State, he said.