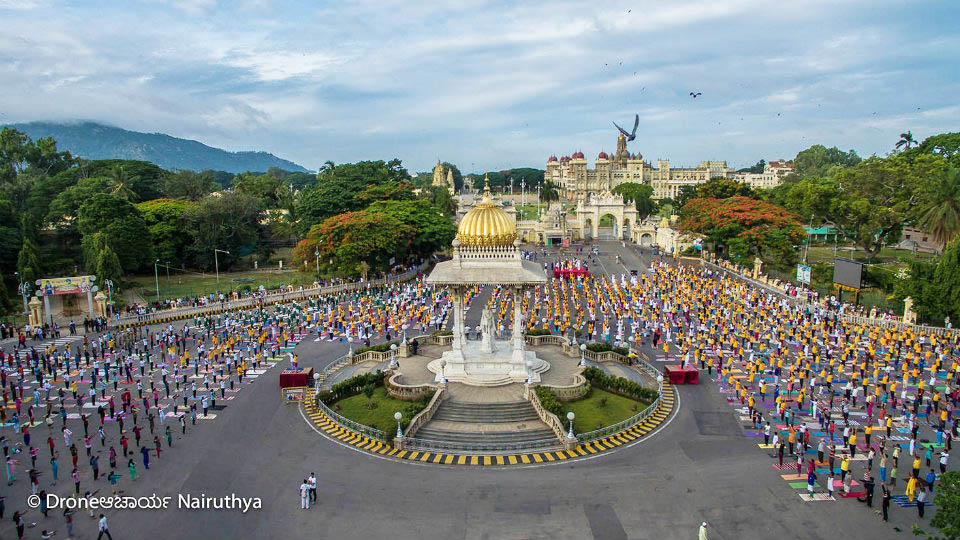 This year, the International Yoga Day on June 21 in Mysuru will be special compared to the two previous editions as more than 60,000 enthusiasts will try to create a new Guinness Record for largest number of people performing yoga at one single venue. Apart from this, 6,001 students from 15 educational institutions will take part in an event on June 19 to break the record of longest yoga chain. This Weekend Star Supplement gives an insight into how the Mysuru District Administration and various associations have joined hands to create a new Guinness Record at the Yoga Capital of the World.

Come June 21, yoga enthusiasts across the world will be taking part in the mega yoga events organised in their respective countries as a part of the 3rd International Day of Yoga celebrations. The United Nations General Assembly (UNGA) on Dec.11, 2014 unanimously declared June 21 as the International Day of Yoga after Prime Minister Narendra Modi suggested UNGA the date as it is the longest day of the year in the Northern Hemisphere and shares special significance in many parts of the world. 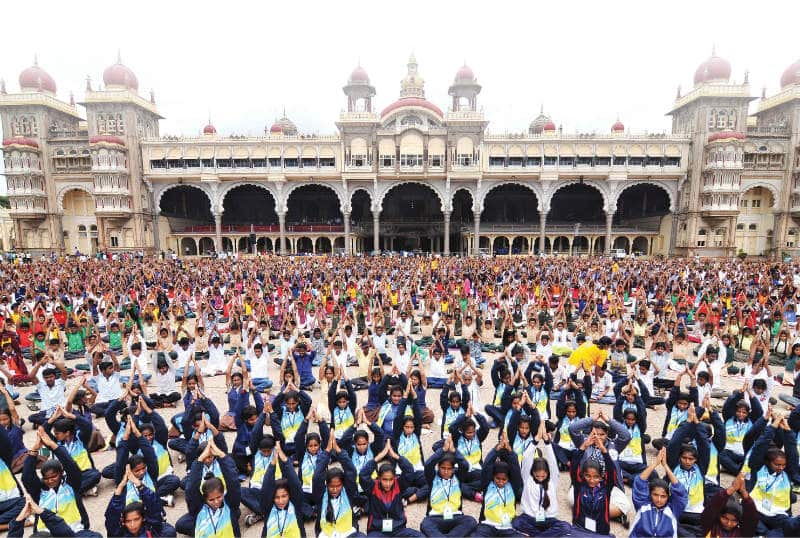 Finally, on Dec. 11, 2014, India’s Permanent Representative Asoke Mukherji introduced the draft resolution in UNGA and it received broad support from 177 Member States who sponsored the text, which was adopted without a vote. This initiative found support from many global leaders. A total of 177 nations co-sponsored the resolution, which is the highest number of co-sponsors ever for any UNGA resolution of such nature.

Following the adoption of the UN resolution, several leaders of the spiritual movement in India voiced their support for the initiative. The first International Day of Yoga was observed world over on June 21, 2015.

In India, 35,985 people, including Narendra Modi and a large number of dignitaries from 84 nations, performed 21 yoga asanas for 35 minutes at Rajpath in New Delhi. The day devoted to yoga was observed by millions across the world. NCC cadets entered the Limca Book of Records for the “largest yoga performance simultaneously by a single uniformed youth organisation” by performing at multiple venues.

The event at Rajpath established two Guinness world records awarded to the Ministry of AYUSH and received by AYUSH Minister Shripad Yesso Naik. The two records were for the largest yoga class, featuring 35,985 people and for the largest number of participating nationalities (84 nations).

This year 300 students and teachers from Rathanapura Vidyalayam School in Sangareddy will be performing yogic exercises at the United Nations Headquarters in New York on the occasion of International Day of Yoga on June 21.

In Mysuru, the District Administration is geared up to create a record for the highest yoga enthusiasts performing exercise at one place. The officials are expecting more than 65,000 people to take part in mega event to be organised at the Mysuru Race Course. 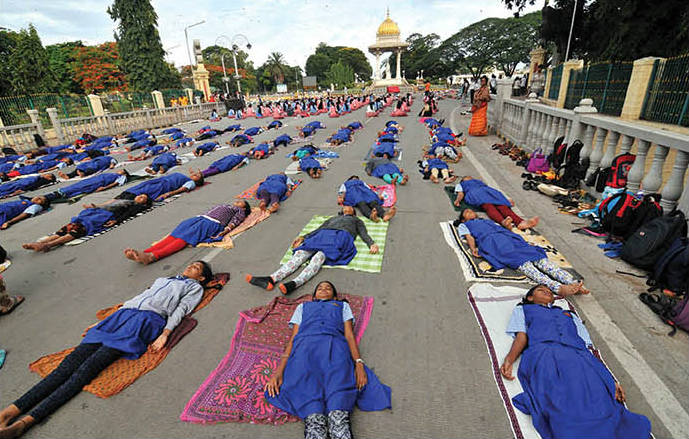 The Department of Collegiate Education and Department of Public Instruction will get 2,000 college students and 10,000 students from Std 8-10 respectively, 10,000 Patanjali yoga students, 1,000 volunteers from Brahmakumaris, 1,000 from Vivekananda Yoga  Institute, students from Government Yoga and Naturopathy College, Ayurveda College and MMC and RI, Engineering College, 15,000 volunteers from JSS Mahavidyapeeta, staff members of central institutions such as DFRL, CFTRI, RBI, RMP, Postal Service, Scouts and Guides and other associations.

On the occasion of International Yoga Day, around 40 visually challenged students from Ranga Rao Memorial School for Disabled and more than 1,000 employees of Cycle Pure Agarbathies across units will also take part in the initiative organised by Mysuru District Administration to break the Guinness Record in the Yoga Capital of the world. 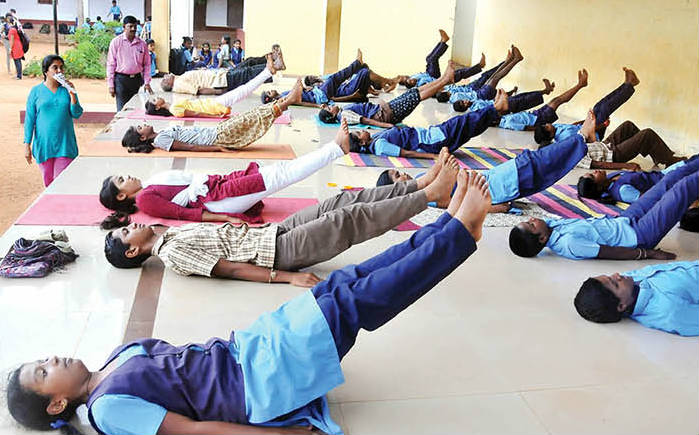 Yoga teachers appointed by the District Administration are training the students and employees for an hour on a daily basis to master their performance. It takes more skill and planning for a teacher to train the visually challenged students.  The instructions to blind students should be clear, concise, and direct, giving an overview of the pose and a sense of its direction. Tactile instruction, or touching the students with accompanying verbal instruction, is also helpful occasionally.

District Administration will provide breakfast for all participants along with water. Organisers will erect three stages measuring 80ft x 40ft for VVIPs and VIPs and two others for instructors. This apart, 25 LED lights will be put up at different locations for the benefit of the public participating in the event. District level officials have been instructed to bring students from various schools and colleges, yoga institutions, NCC, NSS and others. 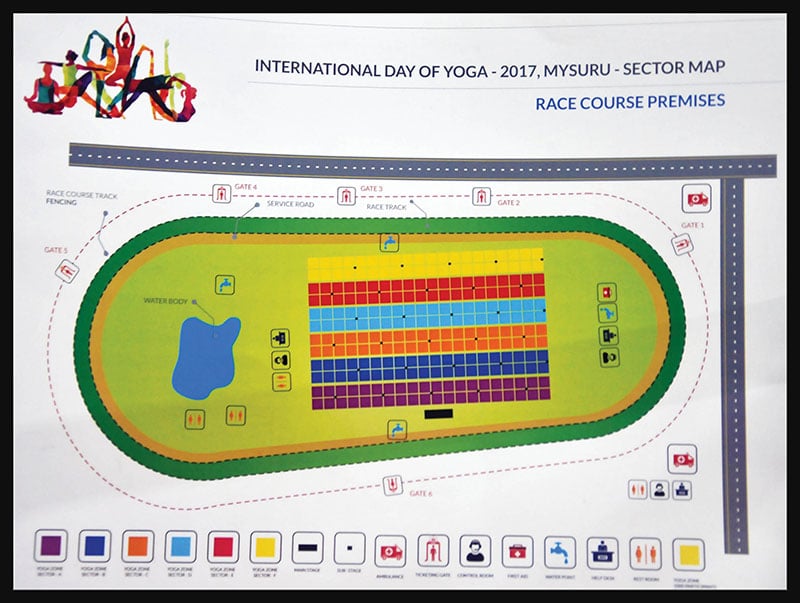 The District Administration and Mysore Palace Board have been making all arrangements for the practice session. The authorities have removed the barricades installed in the premises to facilitate students to perform yoga.

DC D. Randeep, who is personally taking interest, held a meeting with the officials at the Mysore Palace Board to discuss on the arrangements. The students would be transported to the venue in 80 buses and they would be provided with drinking water and breakfast. The students will perform in a circular link for which Randeep instructed the officials to lay the carpets. Parking facilities for tomorrow’s events has been arranged at Town Hall premises, Doddakere Football Ground, Dasara Exhibition premises, near Varaha Gate of Mysore Palace, CADA Office premises and near Amba Vilas Gate.

Over 15 types of exercises will be performed as part of warm-up session and participants will perform 19 Yogasanas in their attempt to create the record. 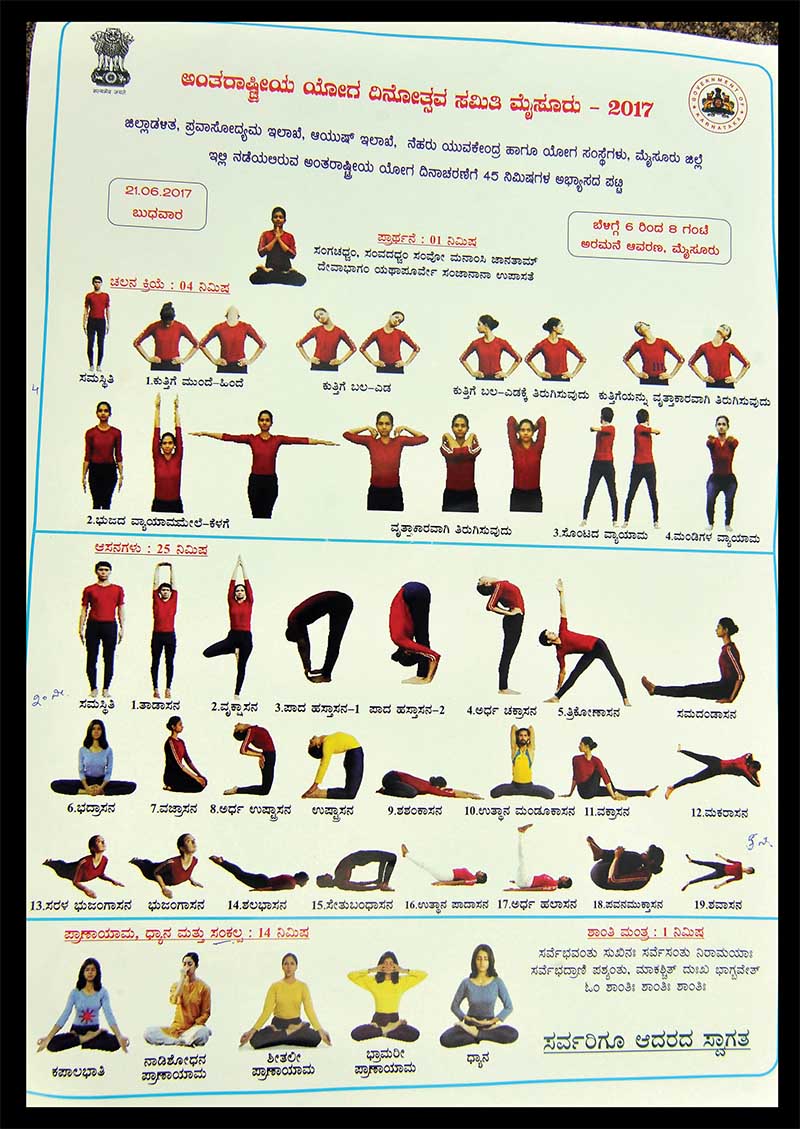 Asanas including Tadasana, Vrukshasana, Paadahasthaasana, Ardhachakrasana, Trikonasana, Samadandasana, Bhadrasana, Vajrasana, Shankasana and other asanas will be performed and later, a Pranayama, Dhyana and Sankalpa sessions will be held. 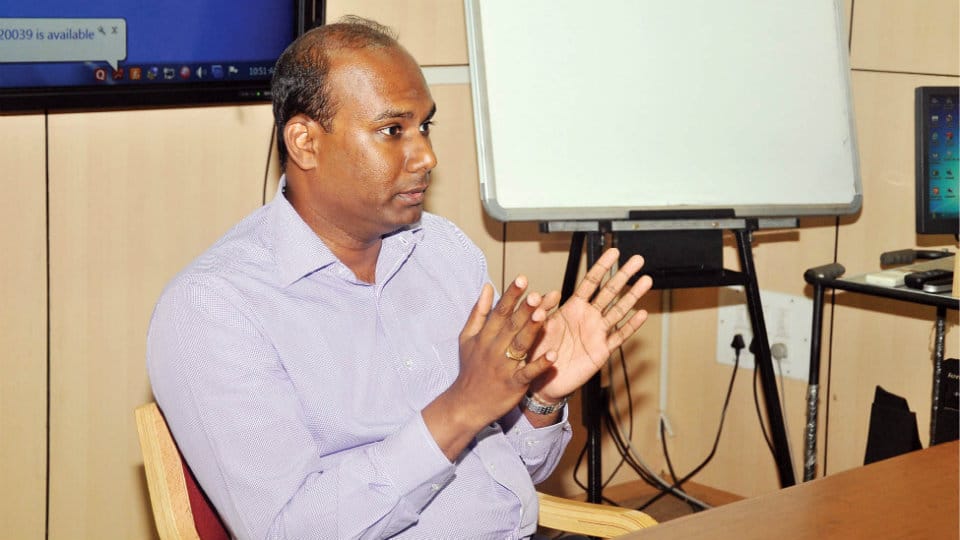 Opportunity to create Guinness Record does not come to people every day. There are number of people who have been waiting for opportunities like this to enter the record books. This is not only to create a record but also to draw the attention of world towards Mysuru. Our attempt is also to improve the tourism department by attracting a lot of tourists. We are expecting more than 60,000 people to take part in the yoga programme. All six gates of the Mysore Race Course will be opened from 5 am for the yoga enthusiasts to assemble at the venue. – Deputy Commissioner D. Randeep

5 COMMENTS ON THIS POST To “International Day of Yoga: A Guinness Record attempt at World Yoga Capital”