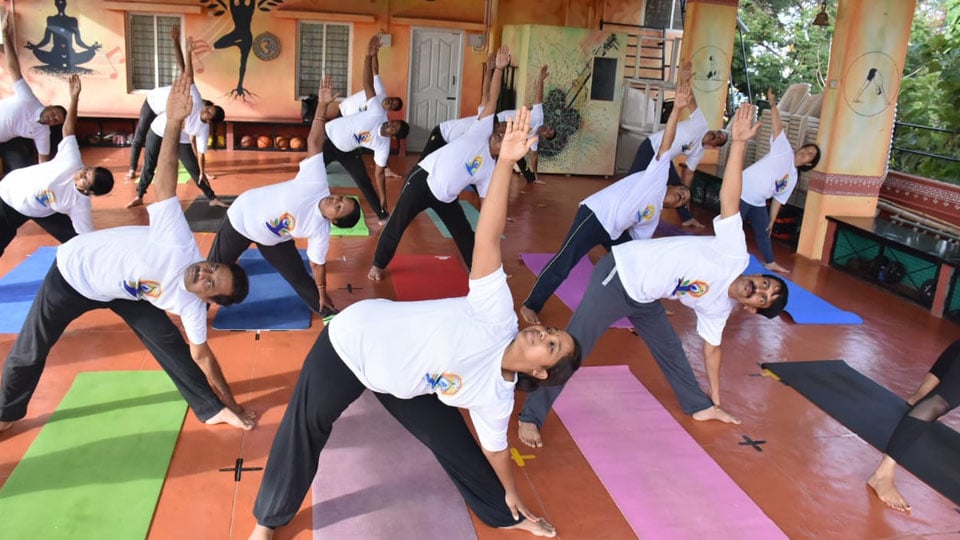 International Yoga Day: Mysureans bend it inside their homes

On the occasion, PM Modi addressed the nation and underscored the importance of yoga, meditation and pranayama. “The world is taking the need to practise yoga more seriously in the wake of Covid-19. Yoga has many asanas to boost our immunity. These asanas strengthen our muscles and metabolism. Coronavirus attacks our respiratory system, and pranayama (breathing exercise) is the best exercise to keep ourselves safe,” the Prime Minister said.

This year’s Yoga Day is being observed differently amid the COVID-19 pandemic as most of the world is amid a lockdown and large social gathering are a strict no-no amid the crisis. In Mysuru, the day was observed at homes and on top of terraces following ‘Yoga at Home’ theme.

Ten Yoga instructors, including heads of yoga institutions, performed various asanas as per the Common Yoga Protocol at a programme organised by the District Administration at Mysore Palace premises between 7 am and 7.45 am.

In order to provide guidance to the public performing Yoga at their houses, the event was telecast live on the District Administration and Vartha Bhavan Facebook pages which were viewed by about 10,000 people.

As per the protocol, prayer was rendered for one minute and four minutes for warm-up exercises before 7 am. Asanas including Thadasana, Vrukshasana, Padahasthasana, Ardhachakrasana, Trikonasana, Bhadrasana, Vajrasana, Shashankasana, Mandukasana and Shavasana were performed for 25 minutes, Pranayama and meditation for 14 minutes and oath and prayer for a minute.

Though it was earlier thought of performing Yoga on the terrace following ‘Virtual Terrace Yoga’ concept, only a few performed on the terrace while others performed inside the houses in view of solar eclipse. Various Yoga Institutions and organisations had organised events at their respective places by maintaining social distancing and other rules.