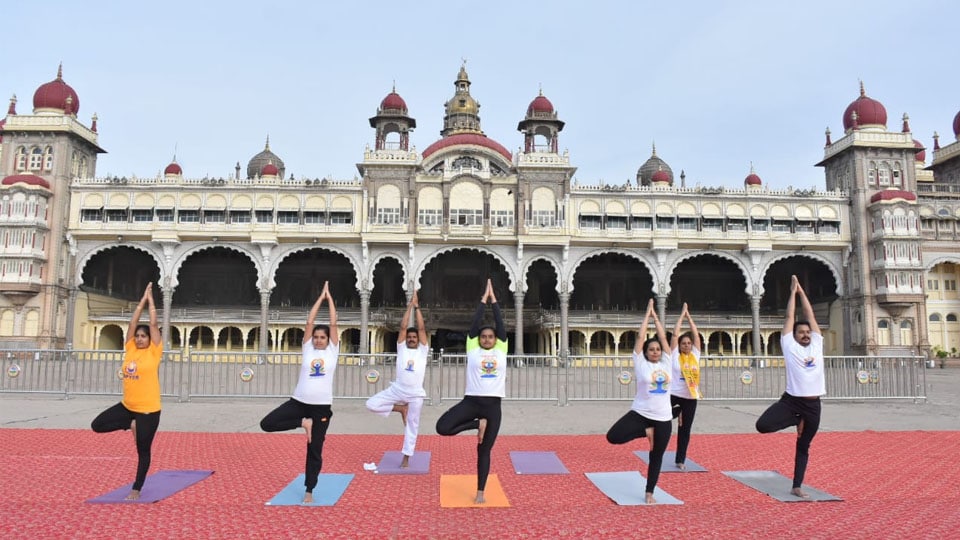 Mysore/Mysuru: Sunday, June 21 2020 (today) was an eventful day where social, religious, astronomical and astrological events came alive. Depending on where in the world one is residing, a plethora of events or festivals unfolded. The day was marked by Annular Solar Eclipse, the Summer Solstice, International Yoga Day, Father’s Day, and World Music Day.

First it was International Yoga Day where Yoga enthusiasts gathered on their terraces and inside the houses to perform Yoga as per this year’s Common Yoga Protocol. This year, the day was literally clouded by Coronavirus and as a result, mass public Yoga gatherings were banned.

While the annular ‘ring of fire’ solar eclipse, wherein the Sun appears like a ring of fire, was spotted in Delhi, Rajasthan, Haryana, Gujarat and Maharashtra, in Mysuru, it was a partial eclipse, thanks to cloudy weather.

The day is also celebrated as World Music Day. In 1982 the Ministry of Culture in France launched the Fête de la Musique, also known in English as Music Day, or the Make Music Day or World Music Day – an annual music celebration that now takes place on June 21 every year.

June 21 is also observed as Father’s Day – by sending messages and wishes — to recognise the contribution that fathers and father figures make to the lives of their children and young population.

Enthusiastic sky watchers wearing solar filters watched partial solar eclipse in city this morning. In Mysuru, which is far away from the path of annularity, the eclipse was partially visible of about 35 percent from around 10 am.

Some people were seen standing on their terraces and balconies and gazing at the sky through X-ray sheets, tinted glasses and cooling glasses. Even as the clouds marred the visibility in between, there was excitement in the air.

Astronomy enthusiast and former Principal and Professor of Physics, Regional Institute of Education Mysuru Dr. S.N. Prasad told Star of Mysore that in Mysuru there was cloudy conditions in the first part and there was fairly clear conditions afterwards. “The solar disk does not show any sunspots anywhere. This is because we are passing through a minimum in the eleven-year solar cycle,” he added.

Divya, a student from Gokulam said, “I thought University of Mysore or some other organisation would organise mass solar eclipse watching event this year also, but due to Covid pandemic and other restrictions, as far as I know, no one has organised such an event in city. I was disappointed as it was not possible to watch this rare event through a telescope.”

Saravana, also a student expressed the same opinion and said, “As nobody had organised solar eclipse watching event this year, I watched it through an old X-ray sheet and it was a wonderful experience.”

Meanwhile, the city wore a deserted look as many people remained indoors due to religious belief that the eclipse could have psychological impact on humans. There was hardly any vehicular movement in most of the major roads, reminiscent of complete lockdown period.