Home » Feature Articles » Interview: An evening for ‘seasoning’ with family and friends 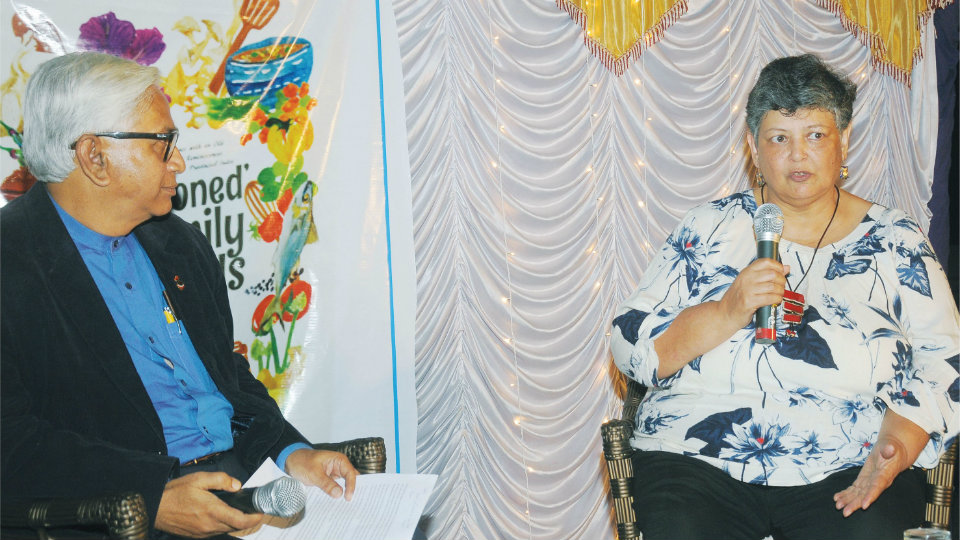 Interview: An evening for ‘seasoning’ with family and friends

Mysuru has always been known for literary works and it has produced giants of the likes of Kuvempu and R.K. Narayan. Their works are classics now and millions of copies are sold even today. But none of their books were ever launched. ‘Book launch’ is a recent concept and our city is also catching up. The ‘conversations’ Senior Journalist N. Niranjan Nikam did with Morvarid Fernandez, who has penned “‘Seasoned’ for Family and Friends” is one such attempt. The book was launched recently at the MRC Club House and the event was organised by International Books, Arts and Culture.

Morvarid spoke candidly about her upbringing, love for Mysuru, her famous parents Farookh Irani and Sheila Irani of the Jawa Factory fame, her farm in Belgaum and a few recipes.

Star of Mysore (SOM): What gave you the idea that you could weave stories into a recipe book?

Morvarid Fernandez (MF): Recipe, it’s so important to know from where they came from. I remember right from a very young age none of us were allowed into kitchen because there was no need for us to cook as we had cooks. But I was 24 and that is when I had to learn to   cook for survival. It suddenly struck me that all that I cooked had some connection to my early years.

Dal and rice eventually got replaced by brinjal and next potatoes came in. We still eat them but the recipes have changed and the way I cook brinjal has changed. I look at potatoes differently now than when I first started cooking 36 years ago. I love to cook but it is not my life, I do other things, I like to grow my own food.

When I was in a school in St. Hilda’s, Ooty, I grew my first potatoes and I was just nine.  I was thrilled when I got three or four potatoes out of the one plant. All these have been a part of growing up experiences. Some people might call it a baggage but for me, it’s really not a baggage. It’s something that I rely on. I think about it all the time and I think that is what gave me this idea, perhaps that I should use my cooking experiences  and share the stories.

My beloved Mysore, this is where I was born but I haven’t lived here for the last 36 years, but then most of my life wasn’t lived in Mysore; but beloved Mysore has changed and when I come back every year I see different things and then I read  the ‘Star of Mysore’ online. I read about Devaraja Market being demolished. You can bring down the bricks and mortar,  but you cannot simply demolish memories. They live as long as you are there, so for me memories are really more   important than recipe.

SOM:     Your childhood and growing up years look very idyllic like the stories of Victorian era. You had parties, you travelled far and wide, and you had lovely grandparents both paternal and maternal. Did you ever feel that you were this aristocratic girl from a wealthy family with the most happening couple as your parents?

MF: No, not at all. I saw my family as very ordinary. As a matter of fact, we had a much disciplined childhood. My parents gave us the utmost freedom, but money and what it could buy was not a part of the narrative. My father came from a very humble background and he never forgot his roots. He was wise enough to understand that his children should learn to respect money and hard work. I was about eight-years-old and I remember asking my father, “Are we rich”? He turned around and told me, “We are middle-class.”

SOM: How do you feel when you look back at all those memories which you have etched in this book?

MF: Yes, I have no doubt and I think the present generation, my own daughter’s generation, have actually missed out something so precious and so wonderful and I think lots of people in this audience, including us who look back at those times and think and you know it’s gone forever; I would not mind, if I get a second chance, I would live it all over again.

SOM: You talk about your Granny Ferguson’s visit to Devaraja Market. You have said “We always entered the market through the North Gate from Dhanvanthri Road.” You know I was a permanent fixture sitting in the corner shop watching the world pass by from a tender age of ten or eleven. I used to see you coming with Abbas, your driver.

MF: I loved Devaraja Market as I always had a connect with the people. They sat in the market and sold vegetables. You know these are the people who actually run India and people who form the backbone of this country and I love them. Then I remember they are so kind and generous to our grandmother. I remember once she slipped badly in the fruit section. I was very young and couldn’t help her get up but the generous fruit vendors came and helped her and spoke to her, they called her mother and these are things I recall. I also remember glass bangles that were sold at the entrance gate from Sayyaji Rao Road.

SOM: The recipes that caught my attention included the Railway mutton curry, Farookh pork, Sheila’s sandwiches and Bannur kuri. Which is your favourite among all this and why?

MF: There used to be a Bannur mutton stall in the mutton market. It is one of the world’s best mutton and if you cook Railway mutton curry with Bannur mutton I promise you can get nothing but the best!

SOM: The Nirmala Bakery, the Pansari Shop K. Govinda Setty and Sons and the Golden Age – you have missed nothing. How did you manage to capture all these wonderful places?

MF: I don’t know how many of you remember Golden Age on Dhanvanthri Road? I think a lot of women would discuss about some of the places we used to visit and the food we would eat.  Hotel Metropole in the grand-old building on JLB Road and the KRS Metropole was a beautiful hotel; you know when lights were turned on, you felt like you are in a fairy land.

SOM: Share with us something about your parents Sheila and Farookh Irani.

MF: My parents were wonderful people. My father’s generosity and his love for his fellow human beings, and my mother’s integrity make me so proud. They have set a very high standard for their children to live up to. I may never               get there, but at the end of it all I hope I can say that I tried.

SOM: Krupalaya is the place where you all grew up. It means ‘The House of Blessings.’ You were truly blessed because you spent the best years there. I thought you would mention something about Jawa factory. Is it something that you would want to keep it for the future?

MF: No, that’s my brother Raian who is going to write about the Jawa Factory. I am thinking of writing a second book but it won’t be a cookbook for sure.  My husband will be collaborating with me for the book; it’s going to be about living in rural India and farming in the Western Ghats. We plan to call it “Thirty-six years in Nersa” because that’s our village.

But just the other day my husband rather sarcastically told me by the time we both finish arguing it will be probably forty-six-years in Nersa. So let’s see that’s what I will be doing. But Raian will definitely be writing about Jawa.