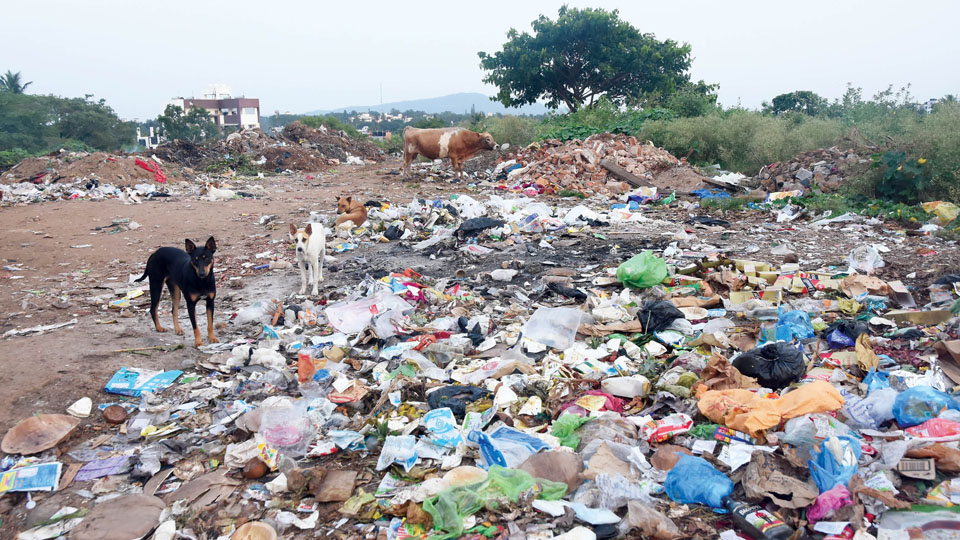 Mysore/Mysuru: Mysuru which had bagged the ‘Cleanest City in India’ tag twice  seem to be clueless about handling garbage menace. While civic workers are doing their best to keep the city clean and tidy, irresponsible people are discarding garbage all around the city making the efforts civic workers go waste.

Heaps of garbage can be seen roadsides, parks, vacant spaces and dilapidated buildings. Garbage dumped in the open are rotting due to rains and residents fear the spread of diseases.

Heaps of garbage is on Mahadevapura Main Road, KRS Road, T. Narasipur Road, Bannur Road, Ooty Road and on the sides of the Outer Ring Road.

Though civic workers work hard to collect garbage from morning till evening, it is not possible for them completely dispose off the garbage. In MCC, 838 direct payment, 724 under Corporation grants and 530 permanent civic workers are discharging their duties apart from another 231 Under Ground Drainage (UGD) workers and over 170 vehicle drivers. Despite these human resources, garbage heaps are found across the city.

Garbage heaps have become a perfect place for mosquitoes to breed and mosquito bites are resulting in various diseases such as malaria, dengue etc. In the last 7 months, over  300 people have been treated for dengue and chikungunya.

It is estimated that more than Rs. 2.5 crore is being spent every month by the MCC for garbage disposal. But still, garbage heaps are found across the city, forcing  Mysureans to live with foul smell emanating from garbage heaps.

“We are not satisfied with garbage disposal works and maintaining cleanliness. The number of people throwing garbage all around is increasing. Because of this, Mysuru is unable to raise to the position of the cleanest city,” says a senior MCC official.

Irresponsible and insensitive citizens are also responsible for the garbage problem in city. On the pretext of walking and while going to work,  they are taking garbage from their houses and throwing them. Some people come in high end cars to do this dirty work and those who are in higher positions are also behaving irresponsibly. Outsiders residing in Hebbal, Metagalli, B.M. Sri Nagar, Vijayanagar Railway Layout, Manchegowdanakoppal, Brindavan Layout, Gokulam etc. are throwing garbage without sense, allege residents of these areas.

The MCC officials have turned a blind eye to all these acts carried out by irresponsible and insensitive residents. They have limited themselves to places where there is extra income and are not bothered to hear public grievances. Outsiders who come to work in IT companies, have made it a habit to bring garbage in plastic covers during morning, evening and night and dump them everywhere. Because of this, fear of diseases are bothering people a lot, says concerned Mysureans.