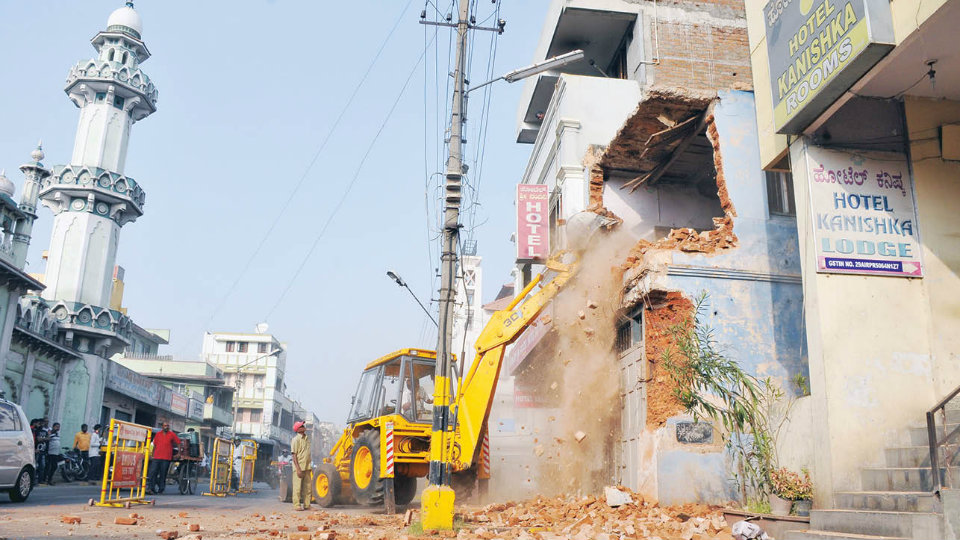 Mysuru:  The proposed widening of Irwin Road in city and the land acquisition process has hit a roadblock as property owners have decided to move the Court against the ‘arbitrary’ road widening move initiated by the Mysuru City Corporation (MCC).

Irwin Road is one of the busiest roads and connects Sub-Urban Bus Stand to the City Railway Station. The 850-metre stretch of the road from Ayurvedic College Circle to Arch Gate on B.N. Road is proposed to be widened. Though the widening proposal was conceived four years ago, only a portion of the stretch — from Railway Station to Ayurvedic College Circle — has been widened.

Last Tuesday, (Dec. 25), the MCC had begun demolition of the existing properties on the acquired land.  MCC said that there are 84 properties along the stretch and all the owners have agreed to part with their lands.

At a meeting held on Dec. 27, property owners and tenants decided to petition the Deputy Commissioner drawing his attention towards the ‘lapses’ in MCC decision to widen the road and seek his intervention to stop the ‘illegality’. They also decided to file two petitions in the Karnataka High Court — one by property owners and the other by the tenants, seeking relief.

The meeting took note of the fact that a majority of property owners have not given their consent to surrender their properties and the claim by MCC authorities is misleading.

Speaking to Star of Mysore this morning, Taj Mohammad Khan of Irwin Road Ulisi Horata Samithi, who is also the Honorary Secretary of Rifa-Hul Muslimeen Educational Trust, said that the entire stretch of Irwin Road is a slice of heritage.

“In fact, the Jumma Masjid was built by Nalwadi Krishnaraja Wadiyar in 1927 at a cost of Rs. 38,000 and he delivered the first sermon. We are not against development or public good. But the way the MCC is thrusting the road widening without even mentioning about rehabilitation is wrong,” he said.

WHY NOT A FLYOVER?

The MCC can build a flyover from the City Railway Station and Sub-urban Bus Stand and this will save a lot of heritage properties and at the same time, will not destroy the lives of property owners and tenants,” Taj Mohammad Khan added.

The MCC has bypassed several legal procedures in declaring the acquisition of properties and the legal protections available to tenants and the owners have not been followed while issuing notices and offering compensation. Rights of tenants have been overlooked by merely offering so called high compensations to property owners, the meeting felt.