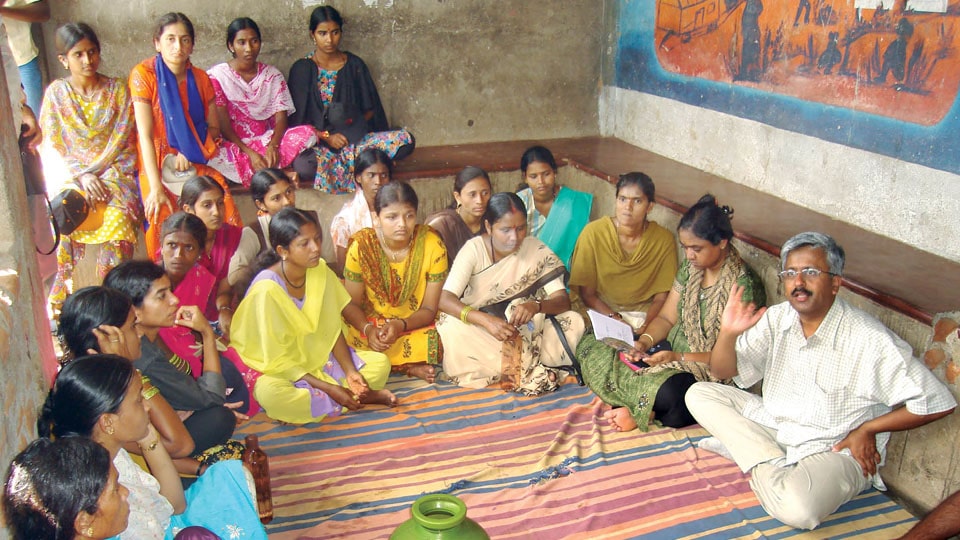 A question that I’ve been repeatedly asked is why I chose Heggadadevanakote (H.D. Kote) taluk to begin my social development work in 1987. Very few know that I did not choose H.D. Kote, but that it was chosen for me by two extraordinary bureaucrats. One was Nanjunda Rao, a retired special Deputy Commissioner (DC) and the other was V. P. Baligar, the then DC of Mysuru.  They had heard about me and my intentions and met me in the Government Medical College where I was still a student. Baligar took me in his official car to H.D. Kote and we walked to several tribal colonies before he offered to help me set up base there. But for his proactive gesture, I am not sure whether SVYM would have started working there.

Several years later another civil servant from the Government of India further reinforced in me the action oriented and proactive spirit of the Indian Administrative Service (IAS). Dr. P.S. Meena was inspecting the work undertaken by the State Government in Karnataka. One of the officers decided to get him to visit our fledgling tribal school campus at Hosahalli. During my conversation with him, I mentioned the challenge that we were facing in raising funds to run the school and in protecting the children from marauding wild animals. He departed to Delhi without any immediate response. Several weeks later, I was astonished to receive a Government Order sanctioning grants for setting up and running a tribal residential school and assistance to construct a perimeter wall around the campus. And all this without asking for a formal proposal or a requisition letter or claiming any credit for the same.

These incidents and several others that followed convinced me of the enormous power and potential for social change and human development that India’s bureaucrats are capable of. Fast forwarding three decades later, the conversation that a senior bureaucrat had with me paints a completely different picture today. He was lamenting the lack of social sensitivity, growing corruption and political leaning amongst today’s career bureaucrats. How does one make sense of all this? Should one regard this as a general degradation of values across society or wonder whether India’s steel frame of public administration has begun to rust?

To appreciate the importance of the civil services, we need to understand the history and evolution of the same.  The origins of civil service go back to the time when river valley civilisations flourished as early as 3000 BC. It essentially revolved round the need to regulate water resources, monitor water flow and supervise their distribution into irrigation systems. The officials doing this were the first civil servants. Gradually their work extended to other public activities and overtime they took over the administration of the entire State. The original use of the word ‘bureaucracy’ refers to a cloth that covered the desks of 18th century French officials and was a way of describing a Government ruled by officials.

A formal administrative structure for a large empire in India emerged with the Mauryans and the Magadhan kingdom. Kautilya laid out elaborate rules of public administration and policy-making.  The system was driven by two key civil servants — the samahartr who prepared the annual budget and kept accounts; and the samnidhatr who kept record of the tax collections and took care of everything that needed to be stored and guarded.  Elaborate layers of civil servants has been described with specific functions and responsibilities, including those who oversaw trade, agriculture, land, transport, mines, forests, textiles, and weights & measures.

With the idea of a modern State emerging in Europe in the Middle Ages, the civil services evolved in countries like France, Prussia, and England.  Here, civil servants were not appointed on merit and appointments were dependent on the pleasure of those in power.  Government offices were seen as private property and corruption was rampant. All this resulted in a demand for reforms in the civil services which happened along with the industrial revolution. Gradually merit-based systems and rule-bound civil service emerged. The flip side was the insistence on a strict application of law, rules and regulations making bureaucracy slow, inefficient and non-responsive to citizen demands. Reforms also meant that arbitrary dismissals of civil servants was restricted and this included the inefficient and incompetent ones too.  The obsession with how things should be done in accordance with rules and regulations gave the impression of a rigid system.  While most public actions were implemented by civil servants, the system functioned in an environment where change, if any, took place slowly and gradually. People too had minimal needs and could put up with the mediocrity of the bureaucracy and had gotten used to an environment of ‘regulation’ and ‘control’.  This also meant a lack of incentive for the bureaucracy to evolve and become more efficient and responsive.

Opening up of the economy and the end of the License Raj in India in the nineties created a sense of decreased dependence on the bureaucracy in the minds of the average Indians.  While there was an enhanced expectation from the system to rapidly evolve and deliver to the changing needs of the common citizens, the bureaucracy had to struggle with a sense of loss of power, prestige and importance.   But despite claims of less government and more governance, the need and dependence on India’s bureaucracy has only been steadily increasing over the last three decades.  Technological leaps, changing political landscape, enhanced citizen demands, rapid economic growth and populist policies have only furthered the need for a public system that can both deliver and be efficient and accountable at the same time.  One can now see the emergence of a powerful civil services in India who are able to justify their need for importance and continuity in an eco-system where their political masters are seen as corrupt, inefficient and incompetent.  The justification often mentioned is that India needs a stable and consistent ‘steel frame’ that can ensure public services continue to be delivered to its citizens irrespective of whomsoever is in power.

Democracies operate with the paradigm of the people electing their rulers who are assisted by the executive in delivering good governance.  While elected representatives are tested and evaluated each time at the elections, the bureaucrats are safely ensconced in their ivory towers insulated from public glare and accountability.  Despite laws ensuring the Right to Information and Guaranteed Services etc., the degree of transparency and accountability leaves a lot to be desired.  Apart from this, bureaucrats have learnt which side of the bread is buttered and have begun aligning themselves to political parties in order to curry favours.  Apart from losing their credibility, this also results in encouraging corruption, elite capture of policies and loss of neutrality.

Post-retirement benefits go beyond the regular entitlements and extends into reaping the dividends of the political inclinations during one’s service.  Appointments to Information Commissions, Directorships of PSUs, Head of market regulator like SEBI and the Reserve Bank of India, Governor of States, Advisor to the PM or the CM ensures continuity of their relevance and gives them the much-needed affirmation of existence.  Apart from limiting opportunities for a new generation of officers who may be better placed to respond to today’s complex development needs and demands, it also enables continuation of a fossilised mindset and the status quo.

This state of affairs, if unaltered will not only result in a continued deterioration of public administration but will eventually lead to the steel frame rusting and falling apart.  Setting up administrative reforms commissions or the ‘Karma Yogi’ portal will not solve the problem. What one needs is a more responsive, responsible, transparent and an energetic civil service that can reboot to function as ‘public servants’ in letter and spirit. A generation of people with both competence and the commitment to serve the people of India in a professional and efficient manner is the minimal ask that citizens must put forth.  While there is no escaping the need and relevance of a dedicated civil service, what is needed is for the steel frame to evolve into that of a ‘composite frame’ and align itself to serving the nation in the spirit of humility, service, integrity and responsiveness.  Only then can we look forward to a bureaucracy that can deliver to Prime Minister Modi’s call of a ‘New India’ and a ‘Atmanirbhar Bharat.’

[Dr. R. Balasubramaniam, Founder of Swami Vivekananda Youth Movement and GRAAM, is a public policy advocate and development activist. He is a visiting professor at Cornell University and IIT-Delhi.  He can be reached at: [email protected]]