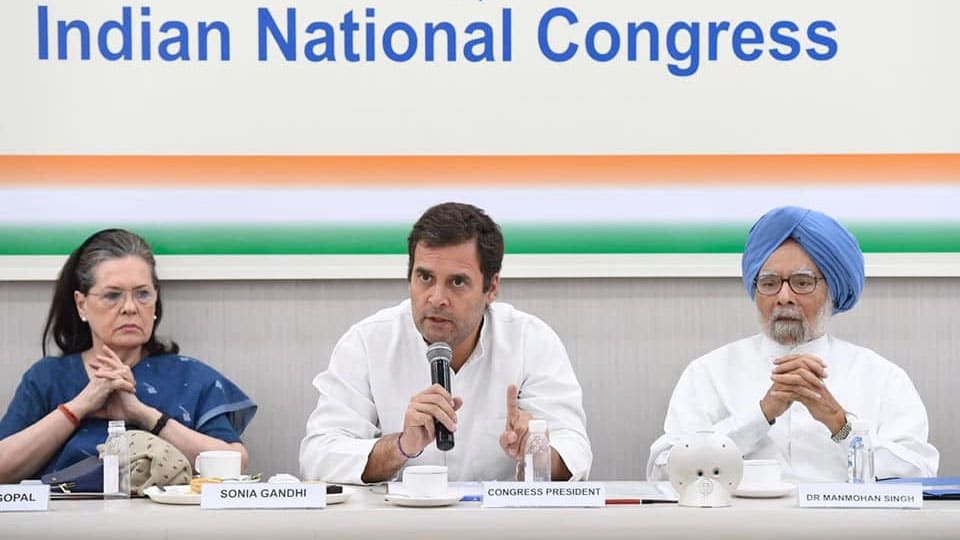 It’s time for a non-Gandhi, but…

In the Congress Party’s most inglorious hour, Rahul Gandhi struck a note that was gutsy and resolute.  It was brave of him to expose the selfishness of some of his senior-most colleagues.  His resoluteness over the issue of resigning became sagacious when he said that the Congress needed a President without the Nehru-Gandhi name.  The air thus cleared, action must follow.

That politicians put self before country is a known truism of our times.  But never has a party chief named names in this connection.  Rahul revealed that P. Chidambaram had threatened to quit if his son was not given a ticket in the just concluded election.  He disclosed, too, that Kamal Nath had insisted on a ticket for his son.  Ashok Gehlot, another doting father, camped in Delhi until he ensured that his son got a ticket.  The Gehlot son did not even win.  And who is the Chidambaram son who won?  A controversial wheeler-dealer facing criminal cases and barred from going abroad without the Supreme Court’s permission. If only Rahul Gandhi had rejected this son’s candidature, it would have been good-riddance twice over.

A non-Gandhi heading the Congress is an idea whose time has come. The argument all these years was that a dynast was necessary to hold warring factions together since all factions bowed to the family.  This provided a safety valve, given the bitter turf wars among Congress veterans.  But the rise of a muscular BJP has changed the game.  It is now an existential imperative for the Congress to win a mass base wider than what the family tag could achieve in the days gone by.

Rahul has understood this, accepted it and seems to be acting upon it.  But the tough part is that a new kind of Congress has to be developed before a new kind of President can take over in a manner that will be seen as natural rather than stage-managed.  This is best done with Rahul in the chair, not because he is a Gandhi but because he earned the necessary credibility through the imagination and commitment he displayed in the last five plus years.

Actually his leadership qualities had come to light when he was the party’s General Secretary.  He had conceptualised novel ways to achieve organisational reforms, revamping the Youth Congress and the National Students Union.  He had enlisted the assistance of experts of the calibre of Election Commission veterans J.M. Lyngdoh and K.J. Rao.  He had employed what were then ultramodern ideas such as data-driven analyses.  A return to that approach is required today when booth-level strategies have become critical for political parties.  The Congress must turn to extensive use of modern technology from Facebook groups to software platforms and statistical projections.

Just as important is alliance building.  The BJP itself has understood the value of this, hence its seat-sharing with bubble parties such as Ram Vilas Paswan’s.  There are natural allies that the Congress should re-connect with.  Both NCP and YSRC have a C in their names.  NCP’s Sharad Pawar is known to be unhappy with the way things have developed.  YSRC’s Jaganmohan Reddy is need-bound to cultivate the Union Government for the special status Andhra needs.  But he is like a lamb in the forest.  If he turns one way, the BJP tiger will devour him; if he turns the other way, the KCR wolf will swallow him.  His only way forward might lie in standing his ground in the company of those who will lend him strength.

READ ALSO  Start with how to make a rifle

Y.S. Rajasekhara Reddy’s magnetism had helped build the Congress into an unchallengeable force in the Andhra region. After his demise, Sonia Gandhi accepted the foolish advice of some foolish aides leading to the elimination of the Congress from Andhra’s landscape.  Now is a good time for Sonia Gandhi to say sorry to YSR’s son Jagan who became a miracle man in his own right; from the pit of failure, he pulled himself out with his own hard work and perseverance to emerge as a people’s leader.

There are also floating power centres that deserve attention: Alpesh Thakor, Jignesh Mewani, Raj Thackeray.  A Congress that is free from the Big Brother air of the past can collaborate with others for a common platform.  This is essential when the ruling party is ruthless in using the State’s agencies to promote its partisan interests.   Democracy becomes dangerous in the absence of a strong opposition.  Rahul Gandhi’s meeting with Sharad Pawar last week was a good beginning.  Such moves can, inter alia, prepare the Congress for a non-Gandhi President.

2 COMMENTS ON THIS POST To “It’s time for a non-Gandhi, but…”