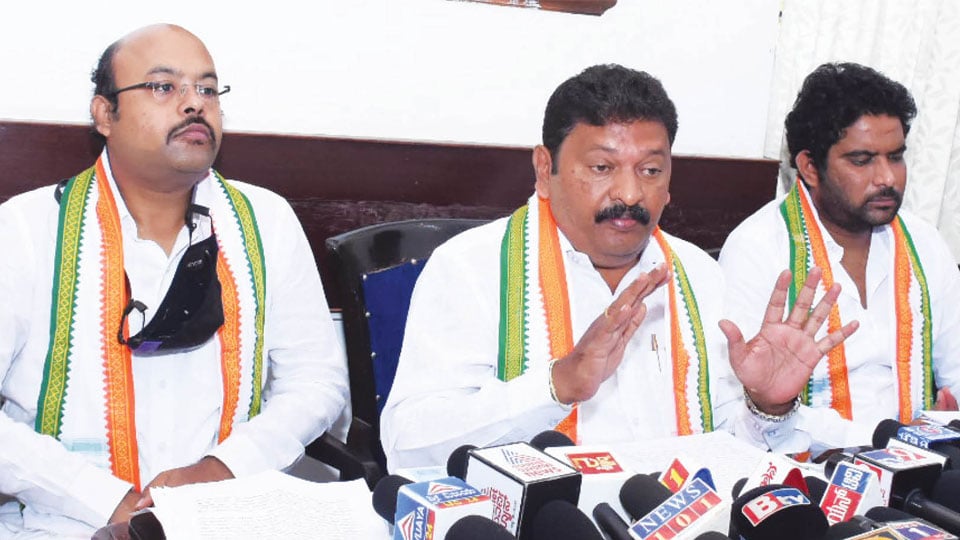 Mysore/Mysuru: Accusing District Minister S.T. Somashekar of protocol violation in the inauguration of Jal Bhavan and other Government programmes, the Congress has warned of showing black flags whenever the District Minister arrives in Mysuru on an official visit.

Addressing a joint press meet at Jaladarshini Guest House here on Saturday, Hunsur MLA H.P. Manjunath charged District Minister Somashekar of visiting the district only for flag hoisting and such other programmes. Maintaining that the District Minister was merely inaugurating works that were launched when Siddharamaiah was the Chief Minister, Manjunath contended that there is no major contribution from the District Minister for development of Mysuru district.

Pointing out that Siddharamaiah as the Chief Minister had sanctioned Rs. 22,365 crore special grants for the district and Rs. 3,800 crore for Mysuru city alone, Manjunath demanded a white paper on the contribution of the District Minister.

Referring to the inauguration of Jal Bhavan in the city, the Hunsur MLA said that Urban Development Minister Byrathi Basavaraj and the District Minister recently inaugurated the Jal Bhavan, the foundation stone of which was laid by Siddharamaiah when he was the Chief Minister. But the KUWS&DB authorities, who had organised the inauguration programme, have forgotten the former Chief Minister and also ignored Congress MLAs from the district, which is a clear violation of protocol.

Asserting that it was Siddharamaiah who had sanctioned funds for the Jal Bhavan, the MLA observed that it was ridiculous that the name of the former CM was not mentioned in the invitation of the inaugural programme. Seeking action against errant officials, he warned of staging black flags whenever the District Minister happens to visit Mysuru.

Manjunath also charged the Government of collecting 50 percent as commission for awarding contracts.

H.D. Kote MLA C. Anil Kumar said that the officials should have invited him for the programme as he was an MLA from the district. Contending that H.D. Kote has been given a raw deal in developmental programmes, he said that it was an insult for the people of the constituency. Accusing the Government of rampant discrimination in the sanction of funds for H.D. Kote, he said that the taluk, which is considered as most backward, is being rendered injustice by the present BJP Government.

Varuna MLA Dr. Yathindra Siddharamaiah said that the rural population of the district have been insulted as most of the MLAs from the district were not invited for Jal Bhavan inauguration programme. Charging the officials of discrimination, he wanted to know why the names of Congress and other rural MLAs of the district did not find mention in the invitation.

Asserting that the Congress Legislators were supporting the Government in the battle against the deadly COVID pandemic, he said that the BJP Government was discriminating against Congress MLAs in the allocation   of funds.

He cited the example of his own Varuna constituency which has got a mere Rs. 8 lakh, while other constituencies of the district such as Periyapatna and Chamaraja had got huge funds.