Home » Columns » Jayantis are a farce 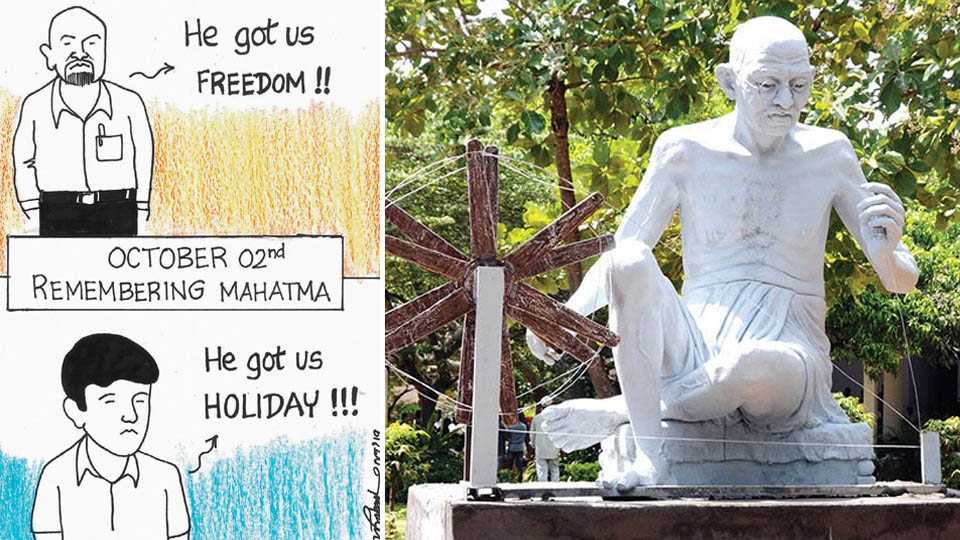 We celebrated the 150th birthday of Mahatma Gandhi three days ago on October 2. It is also the day that United Nations has declared as the International Day of Non-Violence.

But just two days after Gandhiji’s birthday, a case of violence was reported against 49 “intellectuals” as they were booked for sedition.

Now, what did these intellectuals do that deserves life imprisonment, which is the punishment for sedition? They wrote a letter to the Prime Minister requesting him to put an end to mob lynching.  Yes, indeed “intellectuals” quite often have “selective” opinions but how can expressing an opinion become sedition in a Democracy?

Meanwhile, on January 30, the day Mahatma was shot dead, the National Secretary of Akhil Bharat Hindu Mahasabha, a lady named Puja Shakun Pandey and her husband had the vulgar audacity to celebrate it as  ‘Shaurya Divas’ in Aligarh by shooting at an effigy of Mahatma Gandhi ! Of course, they were arrested and a case of rioting and unlawful assembly was booked. They also got bail. Now, if convicted they will get 6 months in jail.

What is interesting is that in today’s India writing a letter to the Prime Minister drawing his attention to atrocities gets one life imprisonment, but shooting the effigy of the revered man who got us Independence gets you just six months in prison !

Gandhi Jayanti is an orphaned birthday because today the Father of one’s “community” is more important than Father of the Nation. Karnataka has 29 Jayantis every year!  And every Chief Minister who comes adds some more Jayantis.

Indeed, these icons are deserving of respect, but it is also a fact that it is done to appease a certain community which in turn they hope will be their vote bank.

B.S. Yediyurappa added Basava Jayanti to honour the 12th century social reformer, who is the icon of the Lingayats; Valmiki Jayanti  to honour the author of Ramayana, who represents the Nayaka community; Kanaka Jayanti honouring the devotional poet Kanakadasa, who is considered the patron saint of  Kuruba  community. And we all know how Siddharamaiah added Tipu Jayanti to appease Muslims. He also added Hemareddy Mallamma, considered the patron saint of the Reddy-Lingayat community. We wonder if it helped him in Badami election.

Also these Jayantis cost the tax-payer money and the administrators’ time. The Government spends over Rs. 50,000 at district-level and Rs. 20,000 at the taluk-level to celebrate each of these birthdays at each district and taluk in the State. But do all people of these communities really follow the works and advise of their icons? We doubt it.

But today anyone can mock Gandhiji because he belongs to nobody. In fact, even the roads named after him are a reflection of our ungratefulness. In Mysuru, Gandhiji was used to play politics.

It is well-known how “well disposed” our former  CM Siddharamaiah was towards the Mysore Royal family. So when he was the Deputy Chief Minister suddenly he wanted to change the name of the Double Road starting from Mysore Law Courts Complex to the end of Race Course Road (Rana Pratap Singh Circle) from Vani Vilas Road to Mahatma Gandhi Road. Why? No reason was given.

But the Urs family members protested because  the road was named after the revered Queen of Mysore, Kempa Nanjammani Vani Vilasa Sannidhana,  who is from their community. They saw it as an insult to their community by a leader who claimed to be a socialist. Soon the matter landed in Court and a needless compromise was reached.

The Road from the City Courts to the under bridge near JSS Hospital remained Vani Vilas Road. The bit  from the under bridge till the Circle near Karanj Lake was renamed M.G Road. After such fuss, did the Government maintain the 300-metre road to reflect Gandhiji’s motto of “Cleanliness is next to Godliness”? No. This patch has a chaotic market. The road is constantly blocked with cows, vegetable-laden autos, vendors and dung. We are sure if Mahatma were alive he would whisper, Hey Ram! in shock and collapse.

If the Government respected Mahatma Gandhi and named it after him, they should have maintained it. By not doing so, the Government has insulted the Mahatma. It’s obvious that Gandhiji’s name was used as a mere tool by a leader who wanted to reinforce his image as a socialist.

Today nobody cares for Gandhiji. His birthday is a farce. In fact, it symbolises the failure of Gandhism; A life of truth, decency, kindness and austerity. We are nothing like what the Father of the Nation wanted us to be.

I am reminded of what was said of  Indians, which perfectly sums up how we see Mahatma  Gandhi: “Indians respect the powerful, and will happily co-operate or collude with them for personal gain. Those who renounce the lure of power are worshipped, not because their example should be emulated, but in sheer awe of their ability to transcend the irresistible.”  Yes, this is how we see Gandhi. We don’t want to emulate him, we simply revere him for not being like us. In fact today we use the name “Gandhi” to mock people who are decent, truthful and non-corrupt.

Our PM said “Gandhi was with us, is with us, and will be there for generations to come.” But we have to ask in what form? As a  farce or as a guiding light to be emulated? Because Gandhiji said, “There is no God higher than Truth.” So is there truth in the claim made on Gandhi Jayanti that India is really open defecation-free?

Yes, Gandhi Jayanti is a farce, so also many other Jayantis. At least the Jayantis of other icons are protected by their community members, poor Bapuji is orphaned.

2 COMMENTS ON THIS POST To “Jayantis are a farce”