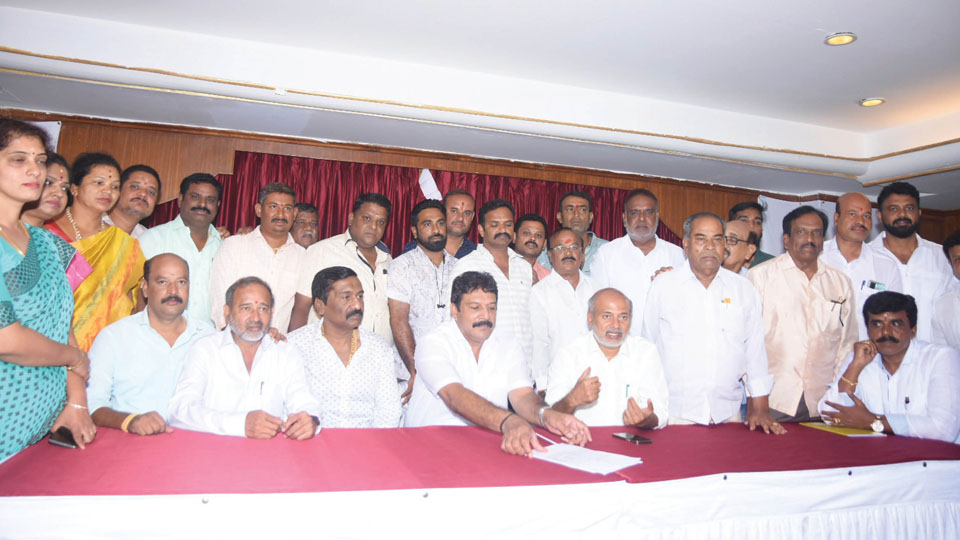 Mysore/Mysuru: With the MCC Mayoral polls just four days away (Sept. 6), political activities in all the three major political parties have gained momentum.

The JD(S), which ruled the MCC in coalition with the Congress for the first two terms of the current tenure of the MCC and let the post go to the BJP for the third term, is now evolving plans to bag the top post for the last term.

Party’s K.R. Nagar MLA S.R. Mahesh has taken the lead in working out strategies and held a meeting with JD(S) Corporators at a private Hotel here on Thursday, a day after Ganesh Chaturthi. The JD(S) has multiple candidates for the top post, who include SBM Manju, K.V. Sridhar, Bhagya Mahadesh, M.D. Nagaraj and Prema Shankaregowda.

Addressing the party workers, S.R. Mahesh said that as agreed last year, the BJP has to support the JD(S) this time. Pointing out that the JD(S) can bag the Mayor’s post easily if the BJP supports the party, he said that the list of aspirants will be sent to the JD(S) top brass.

Later speaking to presspersons, Mahesh urged the BJP to reciprocate the JD(S) gesture of indirectly helping the party to bag the Mayor’s post for the first time ever last year.

Contending that the BJP could not have won the Mayor’s post if JD(S) had continued its alliance with the Congress, he expressed hope that the BJP would keep its word this time and support the JD(S). Asking the BJP to understand the ground realities at a time when no party has the strength of its own to bag the Mayor’s post, Mahesh asserted that, however, the JD(S) has so far not asked any BJP leader for support.

Maintaining that this time the BJP cannot reap the benefit if the JD(S) remains neutral as was the case last time, Mahesh said that this would only be advantageous to the Congress as its number has increased this time with wins in MLC polls. In case of a triangular contest, the Congress could become the winner as the BJP cannot bag the post on its own, he argued.

Expressing confidence that the BJP would support the JD(S) for the Mayor’s post, Mahesh said that in turn, the JD(S) would leave the Deputy Mayor’s post to the BJP as a reciprocal gesture.