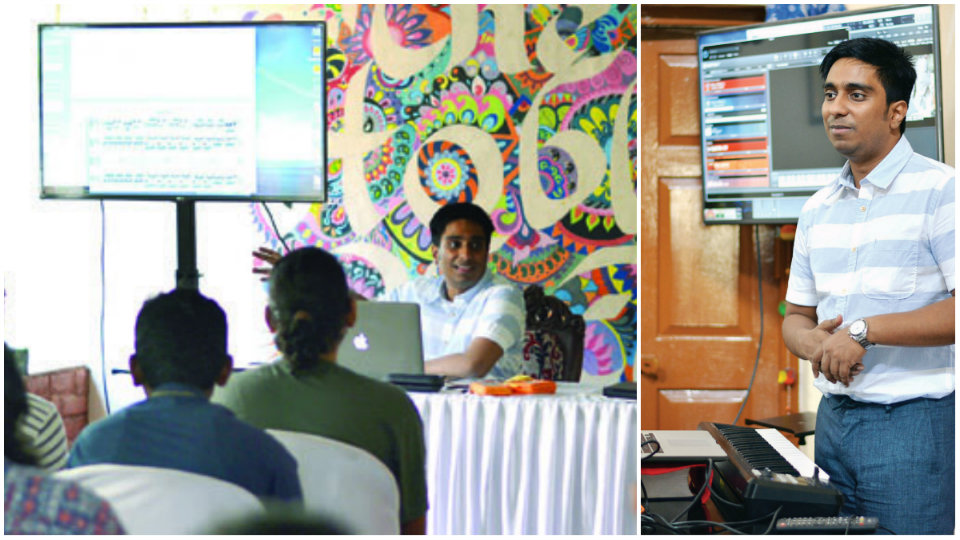 For many, Sound Engineering is an unknown entity. But it is one of the prime and critical factors that make music soothing to ears. With Sound Engineering being an emerging field in the music industry, there is a lot of demand for talented professionals. Star of Mysore met one such talented Sound Engineer in the country Jerry Vincent during his recent visit to Mysuru. He was in the city to conduct a workshop organised by ‘I Love Mondays’ in association with ‘The Hobby Place.’ Excerpts…

Star of Mysore (SOM): Having studied physics why music?

Vincent: I was always interested in music since childhood. But I never knew if I would take it up professionally. I started learning piano from my American music teacher at my school. She was the one who inspired me to learn music. But before I started working in the field, I wanted to graduate in one of the subjects and even my parents wanted the same. Pondicherry, the place I come from, does not have any professional institution that offers graduation course in music. Since astronomy was my second passion, I learnt physics. After graduation, my parents allowed me to pursue my passion and here I am today.

SOM: Sound engineering is an emerging field in India. According to you what does it take for a person to pursue this career? Does science help?

Vincent: Sounding engineering is a combination of both science and music. Whenever you want to create something beautiful, your artistic side comes into play. But how do you do it is science. I think that is why sound engineering is an interesting profession. You don’t have to study hardcore science. But if you get to know how science works you will be good.

SOM:  How does it feel to be working with a maestro like A.R. Rahman?

Vincent: Everyone dreams to work with A.R. Rahman because he is the top composer in India and one of the best in the world. When I thought of taking music as my profession, I had thought of working with him. I had no God Father in the industry but I did my work sincerely. I studied sound engineering at an institution named Music Conservatory in Chennai where I passed out as a topper. As such, A.R. Rahman asked me to work in the institute and I did for a year. He then invited me to work with him. And that is how I landed up in A.R. Rahman’s studio.

SOM:  Being a music composer as well you have worked with both Ashutosh Gowariker and A.R. Rahman. How would like to compare them?

Vincent: Both being extreme talents is the best part as they bring out the best in you. Ashutosh and Rahman always demand more than 100 percent from a person. If it is a little less then you can easily get to know that they are not happy with the output. One has to put in a lot of effort to satisfy both the geniuses. Both are friendly and inspiring.

SOM: Do you think there a demand for sound engineers in the country?

Vincent: Of course, there is a lot demand for the sound engineers in the industry today. This being an era of internet, people watching movies or listening to songs on the internet keenly observe the credits and would want to know who the sound engineer is. It is not only about sound engineering, there are other related professions which are in demand.

SOM: Do you see yourself as a music composer in days to come?

Vincent: I am already doing it. A.R. Rahman being my ideal I will continue to work for him. We have been working on many movies including Robot 2 directed by Shankar and finished an English movie ‘The Viceroy’s House’ directed by Gurinder Chadda. I am also working in a Hindi movie on my own.

SOM: Lastly, tell us about your association with ‘I Love Mondays’?

Vincent: I have been associated with them since 2015. I had met Mala from the organisation sometime back and now I am conducting interactive sessions so that people know what sound engineering is all about. People have a lot of confusion and I am trying my best to clear the same so that youngsters can choose what they want.