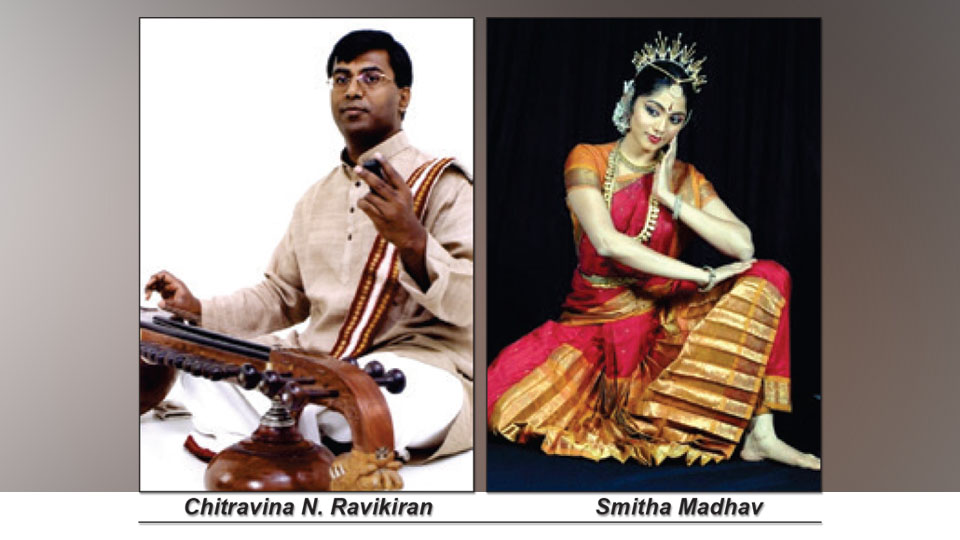 Sri Nadabrahama Sangeetha Sabha, in association with Mysuru Kalabhimani Balaga and other prestigious Music and Dance organisations of Mysuru, have organised an unique presentation of Chitraveena and Dance by Sangeetha Samrat N. Ravikiran and Smitha Madhav named ‘Pancha Mahapurushara Mukthimarga’ at Sri Vasudevacharya Bhavana, Sri Nadabrahama Sangeetha Sabha, on JLB Road in city on Feb. 14 at 6.30 pm. They will be accompanied by Vid. B.C. Manjunath on mridanga.

Also, Chitraveena N. Ravikiran will be felicitated on the occasion in the presence of Swami Athmajnanandaji of Sri Ramakrishna Mutt, Mysuru.

Celebrated musician and composer Ravikiran has come up with a new initiative, Nritya Naadaamrita to offer audiences an enhanced experience in instrumental concerts. The maestro, hailed globally as the ‘Mozart of India’ (Belgium National TV) and as “perhaps the greatest slide instrumentalist in the world today” (Radio Australia), has teamed up with noted dancer, Smitha Madhav to highlight the evocative emotional aspects of music (bhava) through visual portrayal of songs as well as extempore word-less improvisation like alapana, tanam and swaras.

Ravikiran said “Instrumental music enjoys global market and the chitravina has attracted audiences of nearly 50,000 in some parts of the world.  However, typical Indian classical listeners gravitate towards vocal as they like to hear the lyrics. This new initiative will now empower them to enjoy instrumental concerts even more as they can ‘hear’ the words through their eyes and ‘see’ the dance through their ears. This concert will not only have the ingredients of a normal music concert but we have also planned to factor in certain salient aspects typical to a dance exposition including pure dance (nritta) segments.”

Smitha Madhav, a National Award winning film actress and television personality, said, “I am super excited about this collaboration because it also gives a new dimension to dance since most dance concerts have music that is tightly set and even our own imagination is pre-choreographed and it is not often that a really creative dancer can take off adventurously on stage.  Ravikiran sir and I have been brainstorming a bit about how to make this different from any other presentation that people have seen before without diluting values and we have come up with some elements that we hope the pundits as well as general audiences would welcome!”

It is well-known that Ravikiran, who stormed into the music world at the incredible age of two is today among India’s busiest performers and also one of the most prolific composers, with over 700 compositions to his credit including operatic creations such as Ramayana, Mahabharata and Almighty Trinity, the last of which was choreographed by Smitha and presented in various Indian and US cities recently.

Hailed in world music as the inventor of the award-winning concept Melharmony, Ravikiran said that the duo was planning to project masterpieces of Purandara Dasa, Annamacharya, Tyagaraja, Oottukkadu Venkata Kavi and other noted composers in these concerts.

The concert will feature pure dance parts too, apart from music solos and aim for a balance between melody and rhythm, slow and fast sections giving a wide range of colours from the tranquil to the thrilling. “We may also sing a couple of lines here and there spontaneously,” Ravikiran said, adding that both he and Smitha were also performing vocalists.

Smitha Madhav has enchanted audiences in major events in USA, Australia, UK, Singapore, Indonesia, Malaysia. She also has to her credit several pieces of original choreography ranging from the sacred to the secular, the latest being Ravikiran’s ‘Almighty Trinity.’

With an active performing career spanning over two decades, Smitha is one of the very few artistes who renders full length Indian classical dance recitals as well as Karnatak vocal concerts. She played the role of Seetha in the 1997 Award-Winning feature film Ramayana. A lawyer by training, Smitha has chosen to dedicate herself entirely to the propagation of the Indian classical arts.