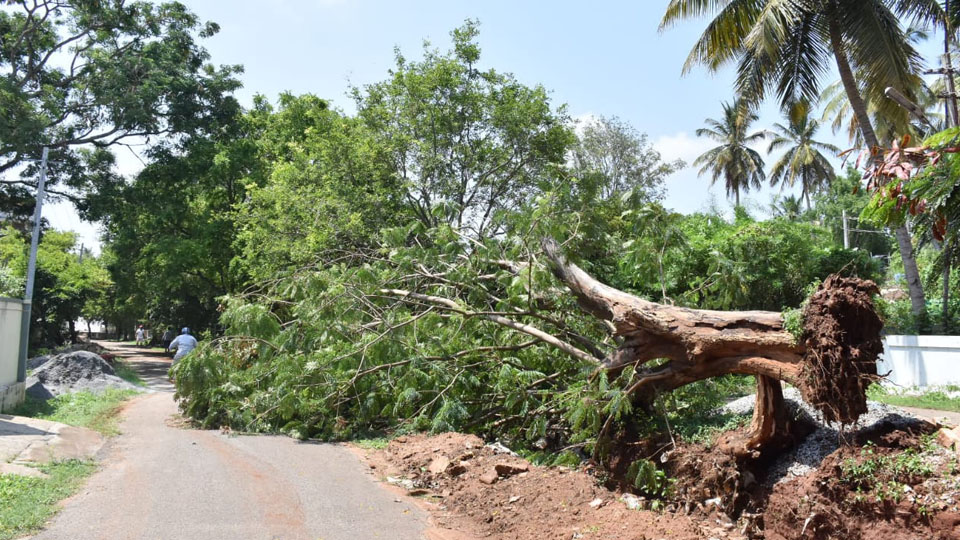 Mysore/Mysuru: Last night, Mysuru witnessed heavy rainfall in different parts of the city. The Meteorological (MET) Department has predicted rainfall till May 30. The MET Department further stated that the sky would be partly cloudy with one or two spells of rain or thundershowers.

Heavy rain accompanied by strong winds left several trees uprooted and reports of water-logging and overflowing drains also came to light. Rains in peak summer is a rare phenomenon and apart from the cooling effect, the showers have also brought some good news on the drinking water front.

According to the weekly data updated on the website of Karnataka State Natural Disaster Monitoring Centre (KSNDMC) on May 22, water level at the Krishna Raja Sagar (KRS) Dam stood at 93.26 ft. while the maximum level is 124.80 ft. Last year, the level on the same day stood at 81.59 ft., raising concerns about drinking water supply to Mysuru. Today’s level stands at 92 ft.

This summer, however there may not be a water crisis as the Dam has 92 ft. storage and the Tamil Nadu’s share of Cauvery water has already been released, said KRS officials. Thanks to pre-monsoon rainfall in the catchment areas of Kodagu, the inflow has increased and the MET Department too has forecast early monsoon.

Yesterday, the rain which began to pound city areas at about 8.45 pm, lashed for an hour causing extensive damages. More than 15 houses on the 1st, 2nd and 6th Cross on the 9th Main in Vijayanagar 2nd Stage and a few houses in Paduvarahalli were flooded and residents were seen removing rain water mixed with sewage from their houses.

Nearly 10-15 trees were uprooted at Vidyaranyapuram, Vijayanagar, Srirampura, Saraswathipuram and surrounding places damaging vehicles, snapping power lines and breaking or bending electric poles, plunging many parts of the city in darkness. A partially uprooted tree was seen leaning on an apartment building on Geetha Road near RTO (West).

While two trees were uprooted near the residence of the Deputy Commissioner on Hunsur Road, one tree each was uprooted near Basappa Memorial (BM) Hospital, Lalitha Mahal Road and in Rajivnagar. A car proceeding on Hunsur Main Road hit the road divider and toppled due to rain. Luckily, no one was injured.

The MCC personnel were clearing trees in Saraswathipuram and other places while CESC personnel were seen clearing broken electric poles from the roads this morning. Also, many residents were seen chopping the branches of fallen trees and taking them away for firewood.

Dr. C. Govindaraj, Professor at the Extension Education Unit of Organic Farming and Research Station at Naganahalli (OFRSN), speaking to ‘Star of Mysore,’ said that the city recorded 24 mm rain yesterday. 2 mm rainfall was recorded on May 23 and 10 mm on May 24.

He said that the temperature was recorded between 34 and 35 degree Celsius which would go up further and added that the rainfall was due to extensive heat and not because of any cyclone. He added that the district which witnessed scattered rainfall earlier witnessed uniform rainfall throughout yesterday. There would be rainfall for two more days, he reasoned.