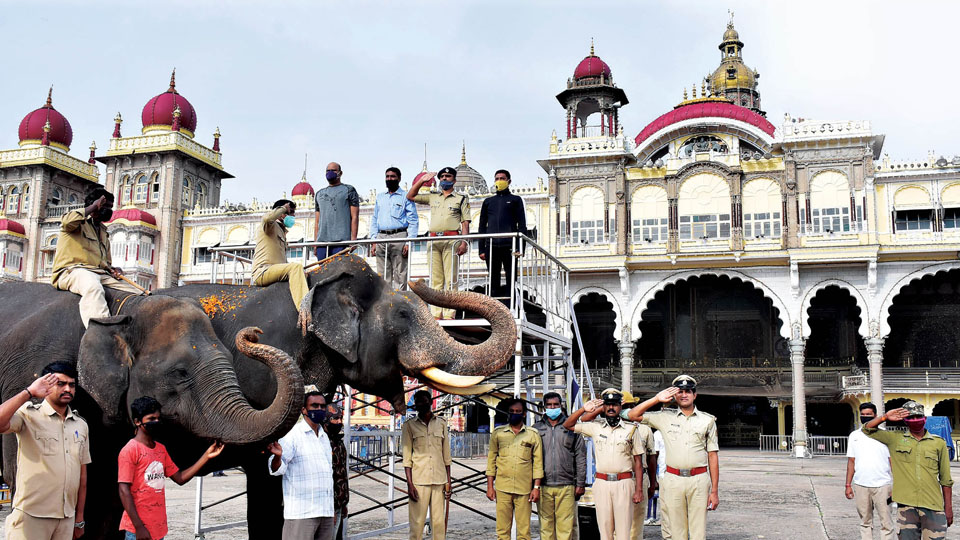 Mysore/Mysuru: With Jumboo Savari to be held on Vijayadashami day on Oct. 26, the first rehearsal for the Dasara elephants was held in the Mysore Palace premises this morning.

As Dasara is being celebrated in a simple manner, the procession is limited only to the Palace premises covering 500 mts distance with the participation of five elephants and 30 Mounted Police horses.

This morning, only Golden Howdah-bearer Abhimanyu and ‘Kumki’ elephants Kaveri and Vijaya took part in the rehearsal along with 30 horses. ‘Pattada Aane’ Vikram and ‘Nishane Aane’ Gopi were unable to rehearse for the grand finale as they had to take part in the rituals     in the Palace.

Abhimanyu, along with Kaveri and Vijaya, were taken near the crane, where the 750 kgs Golden Howdah would be mounted on his back and were led to the front of the Palace, where a stage is erected for the dignitaries to shower petals to the portrait of Goddess Chamundeshwari placed inside the Golden Howdah. Upon arriving near the stage, Superintendent of Police (SP) of Channapatna Police Training School Shailendra, along with Veterinarian Dr. D.N. Nagaraj and Palace ACP H.M. Chandrashekar showered flower petals on Abhimanyu.

Following them were the Mounted Police horses, which went behind till Bhuvaneshwari Temple near Balarama Gate, where the procession ended. Abhimanyu today rehearsed without carrying the howdah. While the procession was nearing its end, one of the horses panicked and went out of control resulting in the rider falling from the horse. He, however, brought the stud under control, calmed him down and later joined the procession.

Meanwhile, Dr. D.N. Nagaraj, speaking to Star of Mysore, said that all Dasara elephants were healthy and fit to participate in the grand finale on Oct. 26 and added that the final rehearsal will be conducted on Saturday with Abhimanyu carrying the wooden howdah.