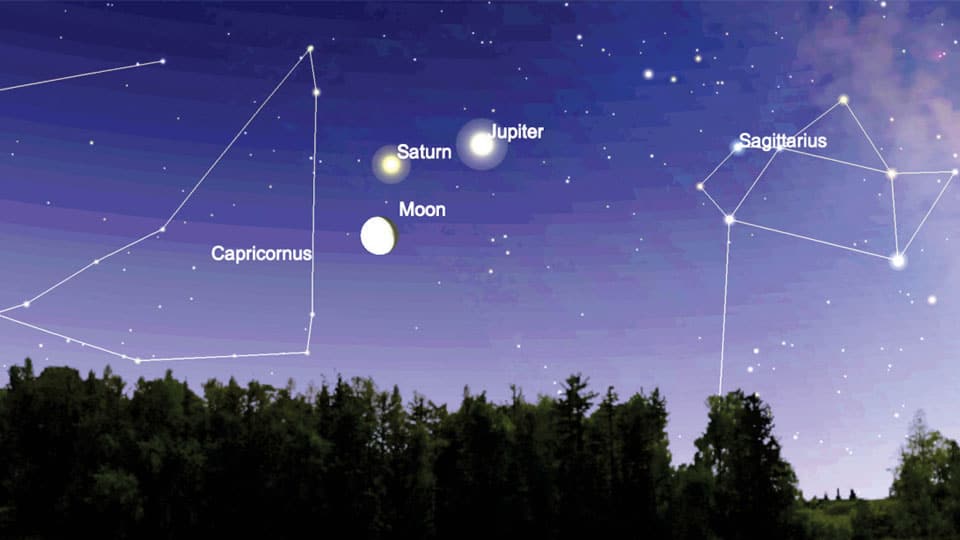 Jupiter and Saturn to dance with Moon tonight

On August 1 and 2, we are privileged to see the closeness of three celestial objects namely Moon, Jupiter and Saturn. Tonight in South-Eastern direction, one can clearly witness these objects with ease, provided the sky should be absolutely clear.

Moon, Jupiter and Saturn can be seen tonight in between two constellations ‘Sagittarius’ and ‘Capricornus’ anytime after 7 pm. These celestial objects will be close to each other and will be the best time for astrophotography.

Jupiter is the second brightest planet after Venus. A few weeks before and after the opposition in July 2020, Jupiter will be very bright, reaching a visual magnitude of about -2.5 to – 2.6. This will be an excellent opportunity to observe Jupiter, its Great Red Spot and Jupiter’s four largest satellites namely Io, Europa, Ganymede and Callisto. These satellites of Jupiter can be seen in a binocular also.

In July, Jupiter came closer to our beloved mother planet Earth and for the entire year, Jupiter blazes most brightly in our sky, outshining the night’s brightest stars by leaps and bounds. Jupiter not only beams at its brilliant best for the year, but stays out all night long!

From Mysuru, Jupiter will be perceptible between 7 pm and 6 am next day. It reaches the pinnacle in the sky at around midnight. Jupiter can be seen in the vicinity of the constellations ‘Capricornus’ and ‘Sagittarius’. Generally, Jupiter reaches opposition about every 13 months and the distance between Jupiter and Earth in August will be around 642 million kilometres.

Analogously, on July 20, Saturn had rendezvous with Earth and was recommended as the right time to witness this gorgeous ringed planet. ‘Saturn’ is the sixth planet from the Sun and the outermost planet is perfectly noticeable with the unaided eye. The imperative physical distinctiveness like magnitude, composition, internal configuration, and atmosphere advocate an overall similitude to Saturn. Saturn’s rings are well-known and were explored in great detail by the Voyager and Cassini missions. Saturn’s rings has unmitigated, disc-like, effortlessly conspicuous with even a small telescope, which envelops Saturn. Saturn reached “opposition” on July 20, 2020 and so it will have the best visibility in July and August. The specialty of this astronomical happening is that, the planet Saturn becomes more beautiful, also the best time to witness the planet. Throughout the night Saturn is discernible and more resplendent.

From Mysuru, Saturn will be perceptible between 7.30 pm and 6 am. It reaches the highest point in the sky at around midnight local time. Saturn can be seen in the vicinity of the constellations ‘Capricornus’ and ‘Sagittarius’. Saturn appears cream-white in colour and is among the brightest star-like objects in our sky this winter. Saturn in 2020 rises earlier and continues to creep higher above the South-Eastern horizon earlier each night. Saturn was visible in the South-East by 7 pm in early July. Jupiter and Saturn have planned to dominate this year captivatingly!

Enjoy watching these dominating planets in August. More precisely, the Moon will swing 1.5 degrees South of Jupiter on August 1 and then 2.3 degrees South of Saturn on August 2. Telescopes for planet watching need sturdy mountings and high-quality optics. One can see to Jupiter and Saturn through telescope easily and none can reveal the glory of it. Most observers use powers of 200x or less, due to unsettled seeing. Also useful are coloured filters, which accentuate specific features on planets. So, do not forget to witness the dancing of Jupiter and Saturn with the Moon tonight.