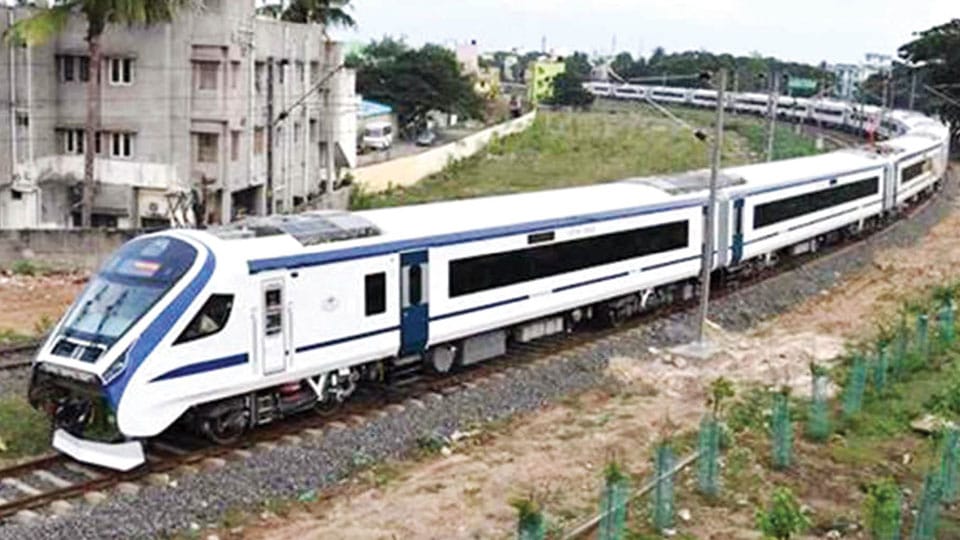 The Union Government has chosen Mysuru-Bengaluru-Chennai as one among the seven new High Speed train routes. Once complete, the travel time between Mysuru and Bengaluru will be 45 minutes!

Unlike the Japanese “Bullet  Train,” these “High Speed” trains, which the Indian Railways call ‘Bullet Train’, can run on regular tracks, which only have to be straightened and strengthened which makes ticket cost reasonable and completion date faster.  But just like how the Bullet train between Tokyo and Osaka changed these two Japanese cities, this desi Bullet train will change the very fabric and soul of Mysuru.

In 1964, Japan opened its first Bullet train route connecting Tokyo and Osaka. The train cut the travel time between the two cities by half. Soon it revolutionised the way Japan transacted its business and the way people lived.

The Bullet trains allowed workers to stay in Osaka, which had lower cost of housing and living, while being able to go to work in Tokyo where they could earn better.  So after the High Speed train connects Mysuru-Bengaluru, people may choose to live in Mysuru and work in Bengaluru! Metro connectivity within Bengaluru only enhances this option.

Another Japanese trend might also manifest in Mysuru — Tourism. In Japan, after the Bullet trains were introduced Japanese started visiting other cities over the weekend or even for a day trip. So Mysuru tourism will also explode. Especially once we come out of Covid, people will be itching to get out, and with money being in short supply domestic tourism is going to boom. Mysuru being a renowned tourist city will profit from it.

In short, this train is going to bring more people to see Mysuru and live in Mysuru.  And so it’s time to prepare. It’s time for serious Urban Planning.  First step — re-haul MUDA.

Mysuru Urban Development Authority (MUDA)over time has simply become a “private layout approval body.” It has failed miserably in its core duty of providing sites to Mysureans. Worse, the legality of its own layouts are being questioned like in the case of K.C.  Layout and  Siddartha Layout. MUDA needs a re-haul. It needs to have professional city planners on its panel. It needs visionary Urban infrastructure developers on its panel. Not just Government appointees.

It may also bode well for our city’s future if the State Government starts planning a metro system in Mysuru right now. Of course, it does not have to be built right now, but acquire land and be prepared. This way we won’t end up like Bengaluru — trying to refurbish an overcrowded house while living in it as more and more people keep pouring into it.

As more and more people start living in Mysuru, more companies will come to Mysuru. Here KIADB needs to be efficient. Unfortunately, they too like MUDA have failed. KIADB says there are no industrial sites, but drive around  KIADB industrial area and one will see more vacant sites than industries.

The Bullet train may be a weapon of mass economic infusion, but shouldn’t our city be dolled up to receive its infusion — infusion of population and pollution? Sanitation and traffic congestion? Water and electric overload?

This Bullet train maybe good for the commerce of our city. It definitely will be good for our tourism-dependent city. It will for sure develop our city. But it just might be the bullet that kills the very soul of Mysuru.

We cannot stop change and we cannot stop this train. So it’s time to prepare for a new Mysuru in the coming years.  It’s time for Mysureans to be active in our communities’ development and be ready to be activists. Because if we don’t, then our city will be turned into Bengaluru — an unlivable, grotesque, urban monstrosity.

5 COMMENTS ON THIS POST To “Train’s coming… Mysuru changing”