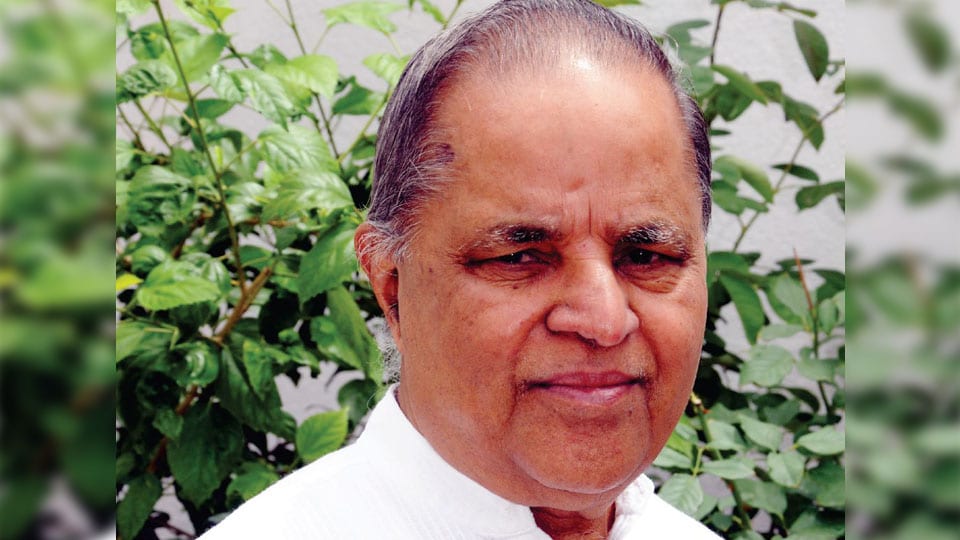 Parampare and K. Ramachandra Abhimanigala Balaga have jointly organised a programme at Nadabrahma Sangeetha Sabha on JLB Road in city tomorrow (July 15) at 11 am to felicitate K. Ramachandra, a Senior Gamaka Artiste from Mysuru, who turns 75.

Scholar Dr. T.V. Venkatachala Shastry will release the felicitation volume ‘Krishnagiri.’ Dr. T.N. Nagarathna will speak about the book. M.R. Sathyanarayana, Vidu. Gangamma Keshavamurthy, Dr. A.V. Prasanna and Dr. R.S. Nandakumar will be the chief guests. Prior to that at 10 am, Gamaka Vachana by various Gamakis and Gamaka – Dance Feature ‘Subhadra Parinaya’ will be performed.

To mark the occasion, here we publish a write-up  on Gamaka Artiste. Now read on…

The famous Gamaka Artiste K. Ramachandra often declares that “Gamaka is my birthright.” The reason being it was his father Krishnagiri Krishna Rao, who was one of the noted figures who resurrected the distinct art form of Gamaka in Karnataka.

Ramachandra was born in the year 1942 in Mysore. He spent almost two decades in close proximity with his father. It is not wrong to say that Ramachandra saw his father more as an artiste than as a father. His mother was Saraswathi Bai, daughter of Beluru Krishna Rao.

Ramachandra says, “Ours was a joint family then and those were the days of extreme poverty and difficulties. Food grains were available only through ration shops. When I recall that my mother would distribute the little food that was at home amongst all the others and remain hungry many days in a week, my eyes fill up with tears.” His mother would never reveal her difficulties or pains but played a major role in his father becoming a famous artiste.

Her simple and pure life and the way she nurtured relationships has been a great influence on me, says Ramachandra. It is said that Ramachandra’s ancestors came from Krishnagiri of Andhra Pradesh and, therefore, it has stuck to his name. Though his father had proficiency in music, particularly violin, he chose the Gamaka art form for his profession.

Ramachandra’s early education was in the government schools followed by Sarada Vilas Institutions where accomplished teachers like Seetharama Shastry and Ramakrishna Shastry were known for their teaching. Even as Ramachandra was a student of the high school, he appeared for “Gamaka Pravesha” examination, thanks to his father who had conducted many Gamaka classes and trained many disciples. As most of his students were women, Ramachandra could not learn from his father directly. He, therefore, learnt Gamaka from his elder sister, Kamalu and got through the examination in first class.

His recitation started with his father’s commentary in the Raghavendra Swamy temple situated in Subbarayanakere area. Whenever his sister was indisposed, Ramachandra would get an opportunity to recite in her place. This was much appreciated by the audience.

Ramachandra fondly remembers an incident when his father became indisposed and couldn’t give the commentary to the recitation of the great Gamaka artiste B.S.S. Kaushik. It was a section on “Saughandika Harana” of Kumaravyasa Bharatha.  Ramachandra’s father tutored the meanings of each line and ordered Ramachandra to give the commentary. Ramachandra made excellent use of this opportunity and created a niche for himself.

Krishna Rao was known to adopt new ragas in his recitation. It was the common practice to recite only six-line verse forms for the recitation (Shatpadi Kavya) but Krishna Rao effectively showed that different forms such as Champu, Ragale and Sanghatya can be adopted for recitation and thereby popularised many ancient verses. Ramachandra acknowledges his father’s influence in the choice of the poem, its context, familiarity with the verse form and style.

Along with such a strong foundation in art, Ramachandra’s education also continued and he secured a merit seat in the National Institute of Engineering (NIE), Mysore. But there was some financial problem. Ramachandra remembers the encouragement and support he received from Prof. H.M. Shankarnarayana Rao and Gowramma Srinivasmurthy. He also acknowledges the help he received from Srinivas Sharma when he started his profession.

Ramachandra started his profession as a Supervisor supplementing his income from giving private tuitions to needy students. When he was working in Robertsonpet near KGF, he started offering Gamaka classes as per the advice of the famous Gamaka artiste Raghavendra Rao. He also completed his M.E. from the NIE.

Ramachandra, who is married to city’s noted danseuse Dr. Tulsi Ramachandra, acknowledges the support of his wife and son in his chosen profession. His familiarity with three languages gives him unusual insights while providing the commentary to complex verse compositions.

Ramachandra has given Gamaka performances throughout the State without bothering about the financial remuneration and has written many scholarly articles on the art of Gamaka and published many books. He acknowledges the friendship he has earned with great scholars such as Govinda Pai, T.S. Shama Rao, Prof.T.V. Venkatachala Shastry, Dr. K. Krishnamurthy among others.

Acknowledging the admiration and encouragement he has received from the Sahrudayas who inspire him to perform, he hopes that the art of Gamaka remains with him till his last breath. Ramachandra’s commitment to this remarkable art form is unparalleled.

[As narrated to Dr. Jyothi Shankar]