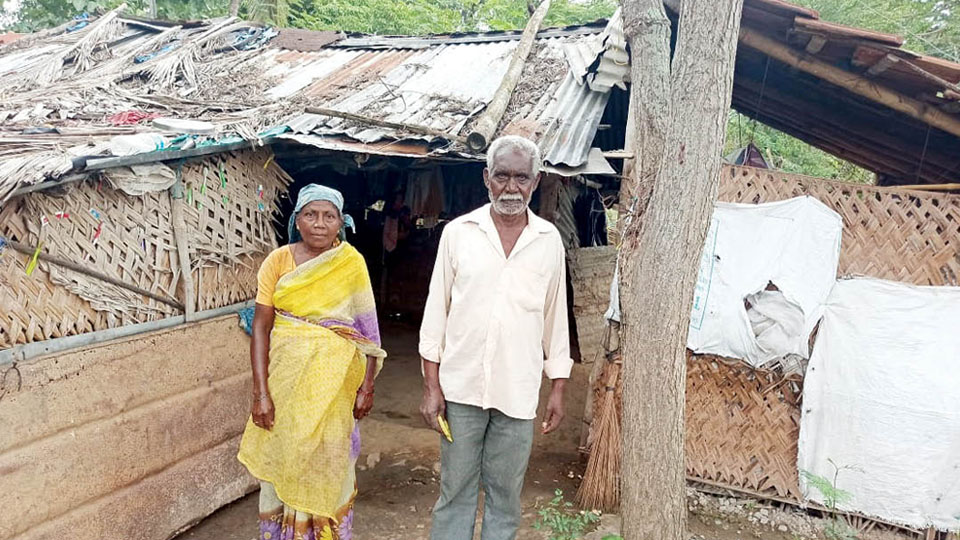 Kabini flood victims in the lurch

Mysore/Mysuru: Inclusion of a village in the list of rehabilitation in advertisement released in newspapers on second anniversary of the BJP Government in State has surprised several families which are living in penury without relief or rehabilitation since last one year.

In a press conference held at Pathrakartara Bhavan in city on Thursday, Cheluvi, Papamma, Shanthi and others of Bidarahalli Circle village, situated adjacent to Kabini Reservoir, said that the excess rains last year created floods in Kabini River and damaged several houses in their village. So far, they have not been rehabilitated or compensated. But the State Government in an advertisement released on July 26, had included their village in the list of rehabilitated villages. “We were temporarily housed in relief centres and then sent back without distributing compensation. The then Housing and District in-Charge Minister V. Somanna had visited our village, and promised to shift all residents to a new location by building 42 houses in three months. The Minister had even performed the bhoomi puja. But the houses are not built so far”.

They said the land, identified for the construction of houses, belonged to the Cauvery Neeravari Nigam Limited. So far, it has not been handed over to Department of Revenue. They were living in make-shift houses amidst the fear of snakes and scorpions. Some of them were living in the houses of relatives.

Petition to Deputy Commissioner, Tahsildhar, MLA and District in-Charge Minister explaining their woes, has not yielded results. Protest held in front of the DC’s office has gone in vain.

“Our forefathers who came here to build the dam fifty years ago, stayed back. Our families shed sweat for this project and Dept. of Water Resources has left us in lurch. Basically we are daily wagers but not have jobs due to Corona crisis”, they noted.

Cheluvi, a resident of Bidarahalli Circle village, said Rs. 50,000 cheque given by the District Administration was taken back saying that the money will be spent on eating mutton-chicken. A temporary relief of Rs. 10,000 was given to affected families but the cheque for Rs. 50,000 given towards the house repair, was taken back after the symbolic distribution. The officials claimed that they will waste that money on buying chicken and mutton. They had promised to build quality houses by pooling more money. But, nothing has been fulfilled yet, she added.

Papamma of the same village said that she lives in the saloon shop of her husband since their house had been totally damaged in floods. It has become common to eat the food mixed with the hair.