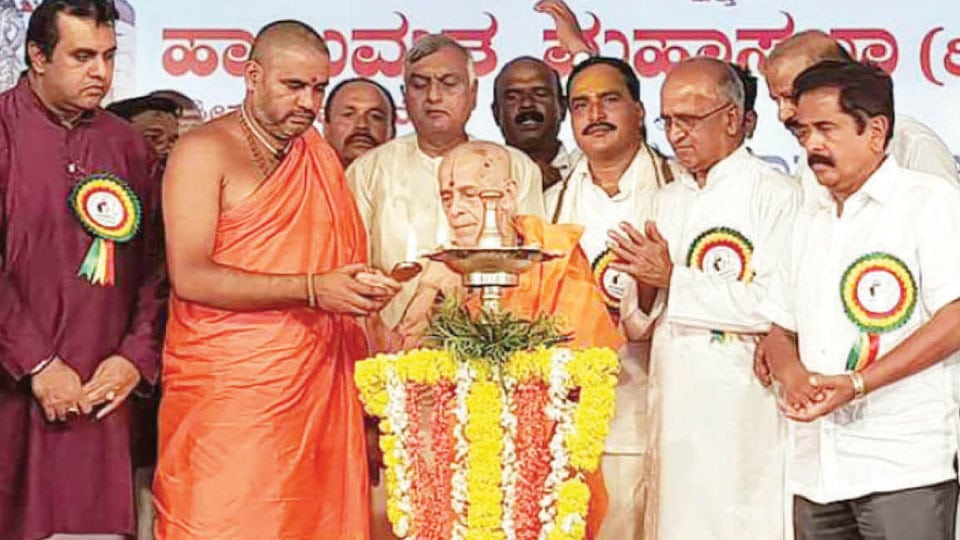 Udupi: Pejawar Mutt Seer Sri Vishwesha Theertha Swamiji has warned of launching a protest against those doubting the very existence ofKanakana Kindi in Udupi from where Lord Krishna gave darshan to Saint Kanakadasa.

He was speaking after inaugurating Kanakadasa Jayanthotsava celebrations organised by Halumatha Mahasabha in Udupi yesterday.

It is a known fact that Lord Krishna, impressed by Kanakadasa’s devotion, had turned towards the west side to give him darshan. This is also mentioned by Saint Vyasaraya in one of the slokas written by him. It is Kanakana Kindi and there is no doubt about it.

Speaking on the occasion, Kaginele Mutt Seer Sri Niranjananandapuri Swamiji said Kanakadasa was a godly person who made Lord Krishna turn towards him through his devotion and added that Kanakadasa must be given similar treatment as it is given to Lord Hanuman, who was an ardent disciple of Lord Rama.

Stating that it was a long pending dream of him to start a Mutt in Udupi, Sri Niranjananandapuri Swamiji said that there might be some differences with Pejawar Seer with respect to customs and traditions but there was a lot of respect towards the senior Pontiff of the Pejawar Mutt.

He also said that Pejawar Seer would be invited for the silver jubilee function of Kaginele Mutt.