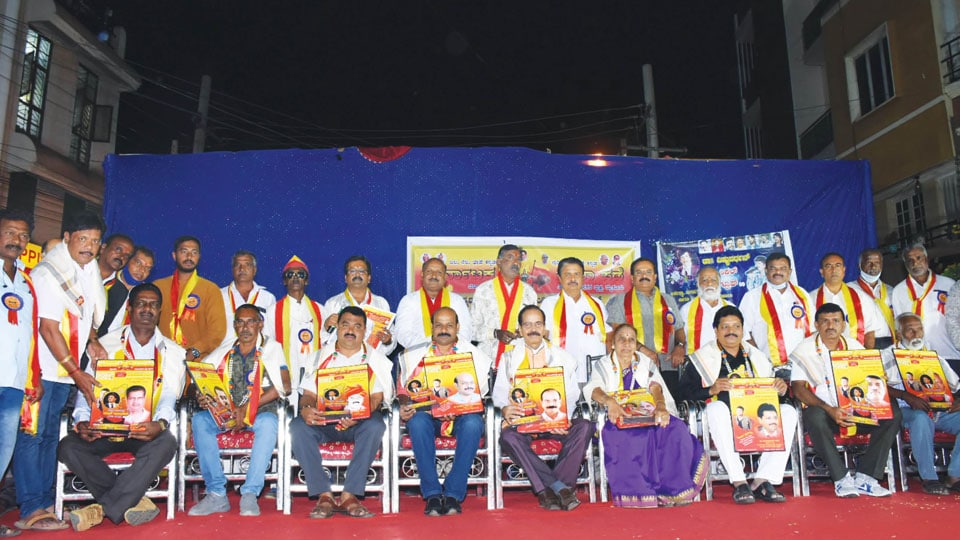 Mysore/Mysuru: As part of  Kannada Rajyotsava and in memory of late actor Puneeth Rajkumar, ‘Karunadu Shri,’ Rajyotsava, Corona Warriors and ‘ Karnataka Rathna Puneeth Rajkumar Saamajika Seva’ awards, given by Karnataka Sena Pade, were conferred on achievers at a programme held near Vivekananda Circle in the city on Saturday.

Speaking as a guest on the occasion, MLC C.N. Manjegowda said that Rajyotsava should be celebrated in all villages of the State. Recalling the formation of the then Mysore State post-independence, he said that the State was renamed as Karnataka by the then Chief Minister D. Devaraj Urs in the early 1970’s. Since then, the State is celebrating Kannada Rajyotsava as a matter of pride, he said adding that the celebration should take place in every nook and corner in order to introduce the rich heritage of the State to future generations.

Recalling the social services rendered by  Puneeth Rajkumar, Manjegowda said that the  late actor’s great deeds came to be known  only after his death. Puneeth has shown the way on how one could do lots of social service sans publicity, he said and lauded Karnataka Sena Pade for announcing an award in his name.